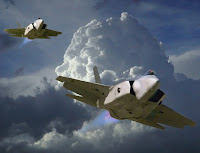 There is no single duty that a President has as Commander-in-Chief that is more important than ensuring the nation’s engines of defense remain at a level that will deter and defend against any attack upon America or its allies.

How is that going under the Obama Administration? As this is being written, the U.S. Air Force and Navy are seeking alternative ways of powering their aircraft after having been ordered to cut fuel costs by $20 billion. The Obama solution includes an August test flight of the C-17 transport aircraft attempt to fly missions on tallow, which is a nice way of describing animal fat.

The push for biofuels notwithstanding, the notion approaches absurdity considering the fact that, beneath the Arctic National Wildlife Reserve, there are millions of untapped barrels of oil to power military aircraft. The absurdity is compounded by the White House attempt to shut down deep water drilling in the Gulf of Mexico which has been struck down by the courts not once, but twice.

My interest in the status of our air defense was piqued while watching a recent C-SPAN broadcast of some Senate committee discussing funding of the C-17. I paid scant attention until one senator said, “We don’t have the money.” Suffice to say, that caught my attention.

Of course we have the money! There are billions unspent in the failed “stimulus” act and millions more wasted weekly across the spectrum of a government that funds all manner of idiotic “research” programs of dubious value. Some $20 million was just spent on signs touting construction projects funded by the stimulus bill.

As Frank Gaffney, the founder and president of the Center for Security Policy, recently noted, “Barack Obama came to office promising to ‘fundamentally transform’ America.” Gaffney and others are increasingly concerned that Obama is “changing the United States from ‘the world’s sole superpower’ to a nation that may require the permission, or at least the help, of others to project power and defend its interests around the globe.”

Nothing invites mischief and outright attack more than weakness. Theodore Roosevelt said, “The pacifist is as surely a traitor to his country and to humanity as is the most brutal wrongdoer.” The latter is a good description these days of Iran.

“The backbone of America’s power-projection capability is its ability to get to a fight ‘the firstest with the mostest,’” wrote Gaffney. Something tells me that doing it with aircraft fueled by slaughterhouse renderings is a very bad idea.

No less important is the future of our fighter jet fleet. It is the subject of a huge congressional debate concerning the next generation of fighters, the F-35 Joint Strike Fighter (JSF). More specifically, the debate involves the engine to power it. But the rub doesn’t involve which engine to use; the argument is whether the F-35 engine should be sole-sourced to a single manufacturer or whether production should be shared by two manufacturers.

One engine is the F135, made by Pratt & Whitney. As with any technological advance, Pratt & Whitney encountered various problems in the development process because the F-35 is designed for use by three different service branches, each with different missions and engine requirements.

More to the point, these services comprise the overwhelming majority of our national jet fighter capability so many in Congress are advocating the production of a second engine. That would be the F136, produced jointly by General Electric and Rolls Royce.

The issue centers on fleet reliability and comes down to an easy and obvious question: Is it prudent for 80-90% of the U.S. Air Force, Navy and Marine Corp’s fighter jet fleet to be dependent on a single engine from a sole-source provider? The answer is no.

If mechanical flaws or difficulties occur, or if that sole-source provider suffers an industrial accident, a labor dispute or terrorist attack, the entire fighter fleet could be grounded.

The Government Accountability Office (GAO) laid it out in starker terms, noting, “Because the JSF is expected to be the primary fighter aircraft in the U.S. inventory, and Pratt & Whitney will also be the sole-source provider of F119 engines for the F-22A aircraft, DOD is faced with the potential scenario where almost the entire fleet could be dependent on similar engine cores, produced by the same contractor in a sole-source environment.”

Despite the strategic risks noted by the GAO, the GE/Rolls Royce engine has been batted about in Congress like a ping pong ball. As Defense Industry Daily noted some years ago, “The Pentagon attempted to remove Fiscal Year 2007 funding from the F-35 Lightning II’s second engine option, the GE/Rolls Royce F136.” But eliminating that funding wasn’t so neat and tidy, and the newspaper further reported, “Many in the U.S. Congress, meanwhile, were openly skeptical of handing Pratt & Whitney’s F135 engine the keys to the entire F-35 fleet.”

F136 funding was re-inserted and development continued on schedule until the FY 2008 budget came around and the Pentagon again tried to remove funding. Congress disagreed and, supported by the GAO’s estimate of $20 billion of tax savings over the life of the program with both the F135 and the F136 engines, again reinstated funding.

Production on the F-35 is increasing but testing is not expected to be complete before 2014 and the engine issue remains unresolved. The Obama Administration now considers avoiding the risk of a systemic sole-source engine failure as a luxury and seems willing to back up that position.

Secretary of Defense Robert Gates has reportedly urged President Obama to veto the 2011 defense authorization bill if the final version includes any money for the GE/Rolls Royce engine.

I cite this to alert you to the irrationality that is driving decisions affecting our most vital national defense capabilities. When a Secretary of Defense proposes a veto of an entire defense authorization over an additional engine for the next generation of fighter jets we’re witnessing something that’s not just absurd; it’s reckless.

The notion that we can’t afford a second F-35 engine is not true. What we cannot afford is to permit our jet fighter fleet and our air transport fleet be put at an indefensible risk when the fate of the nation rests upon both.

Obama is merely emulating FDR. As a result of WWI, combined with the Spanish flu pandemic of 1918, when we lost more of our troops in Europe to the flu than were KIA, Americans were hugely against getting involved in any foreign war again. When the Japanese attacked at Pearl Harbor, The US military strength was less than that of Portugal.

And, this is really a complete loss in confidence in Americans themselves by the "leaders" of either political party and the vast majority of national politicians period. It is in my book either lack of courage, or cowardice.