Things I Don't Care About 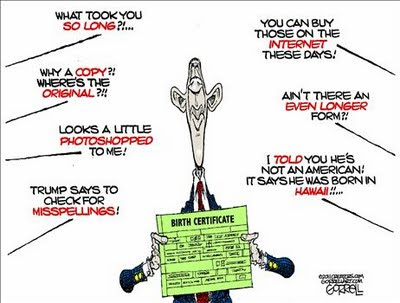 The alleged Obama birth certificate has now become a cottage industry with YouTube videos explaining why it is a fake and a torrent of articles in the mainstream press about its release by the White House.

I don’t care about it.

Well before Obama was elected I had concluded that he was a complete fake with a totally fabricated life that included not one, but two, memoirs to provide the illusion of his progress from his birth to when he began to campaign for the presidency.

I relied then and now on Dr. Jerome R. Corsi’s excellent book, “The Obamanation”, published in 2008. His new book is presciently titled “Where’s The Birth Certificate?”

In another excellent book, “Dupes”, Prof. Paul Kengor chronicled the way the Communists among us have been manipulating public opinion and policy going back to the days when the Soviet Union was established in 1917 and immediately set up an international army of spies, advocates, and the dupes who fell for the lies about their murderous political system.

“The facts were,” wrote Kengor, “that many of Obama’s friends had been dedicated Marxists, Maoists, and Stalinists; he was party to a long-running personnel and professional association with people from the most extreme Left…”

In the two years since Obama’s inauguration in 2009, there has been a steady flow of books revealing more facts to confirm this. That latest is Jack Cashill’s “Deconstructing Obama” regarding the true authorship of the alleged memoirs that appear to be the work of Bill Ayers, a longtime Obama friend and a self-defined “Communist with a small ‘c’”. famed as one of the 1960’s Weather Underground terrorist group.

Other books include Pamela Geller and Robert Spencer’s “The Post-American Presidency: The Obama Administration’s War on America”, Ken Blackwell and Ken Klukowski’s “The Blueprint: Obama’s Plan to Subvert the Constitution and Build an Imperial Presidency”, and “The Manchurian President: Barack Obama’s Ties to Communists, Socialists and Other Anti-American Extremists” by Aaron Klein.

It’s not as if Obama’s totally fabricated “life” has not been thoroughly exposed and the only relevant question is why is he still in the White House?

The “Birther” movement has managed to obfuscate the obvious. Obama is not, as clearly defined, “a natural born” American insofar as his father was a Kenyan citizen. As such, he was not and is not eligible to be President.

I credit Donald Trump for forcing Obama’s hand in producing an alleged birth certificate, but it still does not resolve anything. One of the many other things I don’t care about is Donald Trump, a relentlessly self-promoting real estate mogul and television personality.

The list of things I do not care about is quite extensive, but I will conclude by saying I do not care who wins the next “American Idol” or “Dancing with the Stars.” I don’t care what happens to Charlie Sheen’s career or life. A small part of me, however, wants Lindsay Lohan to get clean, grow up, and get on with her acting career.

For the next year and a half we shall all remain prisoners of the state, ruled by the worst, dumbest, and most malevolent President in the nation’s short history. A lot of Americans care very deeply about the consequences of that.

There you go again, posting all that common sense and stuff... I don't know what we're going to DO with you...

But one thing is a certainty, you NEVER need to change your style Sir! You are the standard that ALL bloggers should aspire to...

Personally, I couldn't care less where Obama was born. Where his HEART lies is all that matters to me, and from everything I'm seeing, he's no American ...

I don't know how exactly Hawaii did things back in 1961, but in Iowa in the 1930s, births were a matter of public record . . . that is, birth certificates were recorded by a county recorder.

Where is the evidence that this so-called birth certificate was ever recorded by a government recording office???

But, as you say, Alan, this Fool-in-Chief obviously hates America . . . the free once-upon-a-time America that I grew up in. It makes no difference where he was born, only that he loathes traditional American values and western culture.

The US Dollar is going bottoms-up, as is the value of money in all other nations of western culture. The Chinese and Indians are dependent on the rest of the world's buying "stuff" and services from them.

When I first saw "The Manchurian Candidate" as a high school student in 1962, I thought it good fiction - totally unbelievable - that the Communists would seriously attempt to put one their own in office by dark deeds.

It appears we are living in the nightmare world of "The Manchurian Candidate."

All I can say to this, Alan, is AMEN, to everything here!

Superb, and totally agreed. As well as the comments. This creation of the left, this communist plant, is but a continuatin of the Wilson/Roosevelt destruction of the idea of the USA.