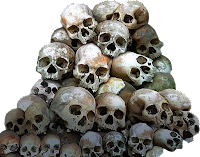 As this is being written it is early Friday morning as the news media saturates us with what I call the “Five Known Facts Syndrome”, repeating the details of the Colorado movie theatre murders reported to have taken the lives of twelve victims with some fifty who have been injured.

We have a selective response to such news, a mixture of grief and anger that such events occur and focused on the fact it has happened here in the United States. That is only natural, but it also ignores the murders occurring throughout the world, whether it is the killing of Israeli tourists in Bulgaria earlier this week or the ongoing slaughter of an estimated 17,000 Syrians by yet another Middle East dictator.

Meanwhile Iran moves relentlessly toward the development of nuclear weapons that, if allowed to be built, will murder millions—first targeting Israel and then most certainly America. All the supposed “diplomacy” and “sanctions” in the world will not deter this predictable outcome.

Whether a movie theatre in Colorado or the attack on an entire nation, it speaks to the madness that exists worldwide, emanating in the Middle East, but which we have seen in Madrid, London, Bali, U.S. embassies in Tanzania and Kenya, and culminating in New York and Washington, D.C. on 9/11.

The President is scheduled to speak to the nation before Noon today and is not likely to make mention of the Fort Hood murders on November 5, 2009, but is very likely to call for more stringent gun control legislation at the same time the United Nations has fashioned an international treaty to disarm the world’s citizens and leave them even more vulnerable to tyranny.

The most dangerous creatures on Earth are humans and murder occurs daily whether it is an Islamic “honor killing” or the murder of a store clerk during a robbery for a few dollars. In Chicago these days the rate of murders rivals the deaths in Afghanistan. In hard times, the murder rate increases with the levels of desperation. The drug wars are a contributing factor in our nation’s cities.

We live in a nation that has jettisoned much of the moral guidelines that distinguished our society, our culture, abandoning the simple act of a morning prayer in the nation’s schools, the definition of marriage, and culminating in a federal government that sanctioned the “walking” of guns to provision the Mexican drug cartels as a ruse to blame the sale of guns to Americans whose right is established by the Second Amendment.

The result thus far of “Operation Fast and Furious” has been an Attorney General held in contempt of Congress and afforded the protection of “executive privilege” by order of the President of the United States.

Meanwhile, ordinary citizens must submit to humiliating “pat downs” in order to board an airplane while the same government fails to identify an illegal alien running a flight school that trained other illegals to do the same thing that culminated in the 9/11 attack.

The deaths of innocent movie-goers is tragic and dramatic, but the murder of a nation’s economy and the dreams of its citizens to get a college degree without going into debt, hold a job, own a home, run a business, or have a secure retirement, pales in comparison.

The perpetrators of this national murder hold high office, are entrusted to act in our best interest, but instead will exploit this latest tragedy, will slander a political opponent as a “felon”, and will continue their relentless destruction of America.

The international institution, the United Nations, will continue to turn a blind eye to the murder of Western civilization.

You forgot the most important part of the anti-gun propaganda regarding the shooting. Within hours the network news media had claimed that the shooter was a Tea Party member without sufficient proof except his name and also the mayor of New York City is pushing for even more stringent bans on gun ownership citing the tragedy as the impetus.

Zamir, the media can be relied upon to slander the Tea Party and all other patriots. Bloomberg is a control freak.

Both are very accurate and true statements, however I felt that not including their indignities in your post was almost the same as giving them a "pass" for their reprehensible behavior.

I agree with you completely. My husband and I were discussing this earlier today. Every day brings news of gang killings, greed killings, envy and jealousy killings and we ignore the massacres. If we totaled a months worth it would be far more than those killed today. Our culture is dying and we ignore the symptoms.
A friend said to me "we've always had murder, remember Cain and Abel?" Yes, I do remember that. I also remember the many times more are killed in Chicago than in our current war. Yet we see no alarm in such killings.
I do not know the answer but if the news media played up Chicago and other city killings as much as this is being played I do believe something would be done.

Zamir, the first rule of writing a commentary--and especially one regarding a breaking news story--is that you cannot include every aspect of the event and what it means. Good writing requires that one be selective.

I liked the post and I'm very glad that you brought up the Fort Hood murders on November 5, 2009. The same FBI that refused to call that incident "terrorism" for fear of offending is now investigating today's incident.

First and foremost, I want to offer my most sincere condolences to the families of the victims of this INSANE person.

That said; Batman movies feature deranged criminals being pursued by a deranged crime fighter, in tights. Apparently these folks thought the only deranged persons they would see would be those on the screen.

And for crying out loud; were the no Concealed Handgun License holders in this crowd?

Fred, there's nothing like having people shoot back at you to discourage such people.

Thank you, FaultlineUSA. It's a sad commentary that we are losing confidence in the FBI and DOJ.

Yes Fred I agree. Where were all those concealed handgun license holders? In a disarmed society it's either the government or the insane that will bring us all down.

It is a sad commentary indeed! But I assume we end up losing confidence in the government about the same time we start to fear it.

When I first heard the news, in the wee hours, I immediately thought -- Obama will use this to push through Senate ratification of the UN Small Arms Treaty.

An instant later I realized my first thoughts SHOULD have been for the victims and their families.

I fear I have grown numb and insensitive to the evil that walks among us.

These are desperate and perilous times for the individual American as well as our country.

May God have mercy on us for we sure to do not seem to have any for each other.

Longstreet, we are all struggling to hold onto our souls in the face of a souless government.

We seem to mostly have only selective memories. People simply become insane at times. I have seen much worse, right here in the US of A.

It is the making a "big deal" about a single man who simply became insane that is the real craziness.

"One death is a tragedy; one million is a statistic."
~ Joseph Stalin

The theater where this shooting occurred was POSTED. Another "gun free zone" becomes a killing zone, courtesy of the morons who fear the gun, and not the criminal....