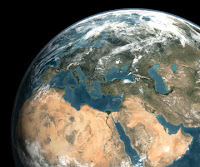 As of Wednesday the news out of the Middle East is that naval fleets in the Mediterranean and armed forces from Russian, Western and Arab nations were, according to Debka File, “piling up on Syrian borders.”

The Russians are aligned with Syria which also has Iranian support as a satellite state intent on keeping Bashar al-Assad in charge. In the UN, the Chinese, too, have vetoed measures to contain the Syrian leadership. The Obama administration has rather belatedly discovered how useless the UN is.

It is yet another Middle East horror show as the greater and lesser powers struggle to contain it.

There’s always a price to pay for making bad choices. The cliché is that we learn from our mistakes, but as often as not we forget them and repeat them. I got to thinking about this as I watched the murderous mess occurring in Syria, the natural extension of the popular movements that overthrew despots in Tunisia, Libya, and Egypt; movements fostered by the Muslim Brotherhood.

Lest anyone assume we are watching democracy in action, a yearning of the Muslim masses to achieve the freedoms Americans and others in the West enjoy, it would be well to take into consideration the general culture of the Arab world and to understand that “Muslim democracy” is as great an oxymoron as “Capitalist communism.”

Nothing about Islam suggests democracy and only Turkey managed to install democratic governance by virtue of maintaining a secular state—backed by the military—that kept Islam separate from government. Ironically, the Baathist—Socialist—Parties in Iraq under Saddam Hussein and in Syria under the Assad family, father and son, did the same thing.

In Egypt under the control of a succession of military dictators from Nasser to Mubarack, all dealt with the militant Muslim Brotherhood by jailing its leaders and making it unsafe to be too Islamist.

Lebanon was considered the jewel of the Mediterranean and enjoyed years of peaceful government by creating a coalition between its Christian and Muslim populations. Then the Palestinians came along to initiate civil wars. Syria, that always coveted Lebanon, sent troops to “maintain the peace” until the Lebanese rose up in a peaceful revolt and forced them out.

What was left, however, was the Palestinian Hezbollah, an Iranian proxy that remains in control in Lebanon. Now the big question is whether the chemical arsenal that Saddam parked in Syria will be used against Israel or against the Syrians trying to drive out the ruling Assad-Alawite clan.

The two times that Americans chose an extremely liberal President, Jimmy Carter in the late 1970s and Barack Obama in 2008, they made a hash of Middle Eastern policy. Carter abandoned the Shah of Iran. Obama famously bowed to the Saudi king, and has belatedly expressed support for the Iranians who fill the streets of Tehran to protest the dictatorship of the ayatollahs. In a similar fashion he was late to the party regarding events in Libya, Egypt, and now Syria.

Contrast this with George H.W. Bush who put together a coalition to force Saddam out of Kuwait in 1990 and his son, George W. Bush, who did the same to overthrow him in 2003 following a swift response to 9/11 when he rendered as much punishment as possible to al Qaeda in Afghanistan. In both cases, their instincts were good, but Bush43 made the mistake of staying on.

The result in Afghanistan and Iraq was a predictable Arab-Muslim response that continues to play out to present times as Sunnis and Shiites do their best to kill one another in order control oil wealth and other income streams. These are largely tribal wars using Islam as their justification though they also demonstrate al Qaeda’s intention to exploit the conflicts in its own interest. In Iraq today, the bombs are still going off, most recently killing more than a hundred victims.

President Obama has proved to be pro-Muslim and extremely risk-averse. He campaigned against both wars in Afghanistan and Iraq because, it must be said, most Americans wanted their troops out of these places and with good cause. Killing bin Laden was a no-brainer, albeit risky. He quickly claimed all the credit for nearly a decade’s effort of his predecessor to find him though he made no mention of it.

The Wall Street Journal in an editorial, “Obama’s Syrian Education”, noted that “It only took 17 months, and multiple Russian and Chinese vetoes, but the Obama administration has finally concluded that the United Nations has failed on Syria.”

The UN is a legacy of Franklin Delano Roosevelt and World War Two. It was fashioned largely by the communists in his and Truman’s administration. There has been little peace in the world since it was established and it has been a huge failure in too many ways to enumerate. It is a cesspool of corruption and the epicenter of the effort to impose a global government.

Obama’s economic policies, largely based on dispensing taxpayer’s money to unions, campaign fund bundlers, and ignoring any steps to address unemployment and other ills, are sufficient reason to throw him out of office in November. His foreign policies have been a disastrous succession of missteps regarding Russia, China, the Middle East, and everywhere else.

The larger war being fought these days is the Islamic assault on the West and it is not likely to end until the military strength of the U.S. is used with precision to punish Iran, the main exporter of terrorism. Or Israel will be forced to take action.

Nations, like individuals, do what they can to avoid conflict. It is costly in treasure and lives, but if history is any guide, it is also necessary, whether it is preemptive or in response to aggression. We have a President who has been Muslim-friendly all of his life—if not in fact a Muslim—and that bodes ill, especially for Israel, our only democratic ally in the Middle East, and for the outcome of the present Syrian civil war.

George Washington had his problems with the "musselmen" of the Barbary Coast and every president since has had his Mediterranean/Middle East policies hampered by those who worship the moon god. Their fanatic allegiance to allah and their disrespect for human life is no surprise to anyone who has read history of the region. The battle began in 1794 when the President signed a bill authorizing the building of six frigates. In 1799 three frigates sailed with Marines aboard to the "shores of Tripoli".
Those who kill for allah will never stop trying for a spot in paradise.
Now we have an irreligious president whose manipulators want nothing but diversion after diversion in the Middle East. We as citizens of this most generous and powerful nation, are distracted and we haven't noticed (it seems) that our precious freedom and the rule of law have disappeared.

Well said, Dave. US history with Muslims has been one long dispute. They are at war with everyone who is not a Muslim and often with anyone who is.

Welcome to the blog, PB!

. .The UN is a legacy of Franklin Delano Roosevelt...

Anna Eleanor Roosevelt (/ˈɛlɨnɔr ˈroʊzəvɛlt/; October 11, 1884 – November 7, 1962) was the First Lady of the United States from 1933 to 1945. She supported the New Deal policies of her husband, distant cousin Franklin Delano Roosevelt, and became an advocate for civil rights. After her husband's death in 1945, Eleanor Roosevelt continued to be an international author, speaker, politician, and activist for the New Deal coalition. She worked to enhance the status of working women, although she opposed the Equal Rights Amendment because she believed it would adversely affect women.

In the 1940s, Eleanor Roosevelt was one of the co-founders of Freedom House and supported the formation of the United Nations. Eleanor Roosevelt founded the UN Association of the United States in 1943 to advance support for the formation of the UN. She was a delegate to the UN General Assembly from 1945 and 1952, a job for which she was appointed by President Harry S. Truman and confirmed by the United States Senate. During her time at the United Nations she chaired the committee that drafted and approved the Universal Declaration of Human Rights. President Truman called her the "First Lady of the World" in tribute to her human rights achievements.
Active in politics for the rest of her life, Eoleanor Roosevelt chaired the John F. Kennedy administration's ground-breaking committee which helped start second-wave feminism, the Presidential Commission on the Status of Women. In 1999, she was ranked in the top ten of Gallup's List of Most Widely Admired People of the 20th Century.

It wasn't FDR, but rather his widow, Eleanor, Alan. FDR was long since dead.

Women can and to have differances in opinion and act in different ways. Ir really helps to get the real story straight for comprehension. Many a married man has done what his wife wanted, as opposed to what he wanted to do. Just keeping peace with his wife, is all.

I have to think that FDR was far too busy with WWII to pay much attention to what his wife Eleanor was up to. Fighting a huge war does tend to keep a man's attention focused on only winning said war.

And then let's talk about how Obama and his posse have allowed Islam to infiltrate his administration. Huma Abedin, the deputy chief of staff to Secretary of State Hillary Clinton has a mother who is an influential member of the Muslim Brotherhood’s division for women, the Muslim Sisterhood. She also sits on the board of International Islamic Council for Dawa and Relief which supports HAMAS. And when Michele Bachmann, a true America patriot, and 4 other Conservatives raised concerns about this woman having access to classified information, they got slammed by McCain, Boehner, Cantor and Congressman Mike Rogers! If Bachmann can't even rely on her own GOP members to support her when she raises legitimate concerns, then what is the future of America? And let's not forget that just a short while ago McCain himself was expressing concern about the Brotherhood. Yet today he supports them. There is something really broken in American politics when these so-called conservatives can justify this type of behavior. Conservatives need to form an alternate party and kick these traitors out of their lives. There is too much rubbish going on in Washington.

Sorry, Larry, but the creation of the UN began in FDR's administration and he tasked staff to put it together. Truman was active in bringing the Soviet Union onboard.

A book, "Act of Creation" tells the whole story.