The Son of John Adams 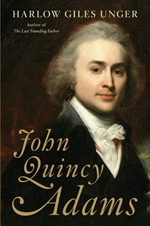 I often wondered what it must have been like to have been the son of George H.W. Bush, the 41st President. The man had so many accomplishments in life that it must have been both inspiring and daunting, especially if you were George W., a free spirit and perhaps the one whom observers might think would be the least likely to follow in his father’s footsteps. Like brother Jeb who was a Governor of Florida, politics and public service is the family business.


This brings to mind the sixth President of the , John Quincy Adams. His father, John Adams, the second President, had already made a lot of history as one of the Founding Fathers. Imagine having to follow George Washington into the presidency? Whew!


And then imagine following your father, Thomas Jefferson, James Madison, and James Monroe in the most critical years of a young nation that needed a navy, indeed, an entire military to protect its interests and citizens. John Quincy knew them all. To be surrounded by such genius would have been daunting, but John Quincy possessed a mighty intellect as well and would devote his entire life to the service of his nation; for him it was a sacred calling.


Generally neglected among the panoply of the early presidents, John Quincy had the misfortune of an unremarkable single term and was followed in office by the towering figure of Andrew Jackson. He would return to Congress as a Representative from .


I recently finished reading Harlow Giles Unger’s captivating biography of John Quincy and, if you love history, it was a narrative I could barely put down. Few men in our nation’s early history witnessed and participated in so much of it from his birth in 1767 to witnessing the Battle of Bunker’s Hill in 1775 with his extraordinary mother, Abigail Adams, from a hillside near .


That, however, was just the start. In 1778 he set sail for with his father who was sent as an emissary of Congress to seek financial aid for the Revolutionary War. In 1781 he went to and the as secretary for the American minister Francis Dana. He rejoined his father at , then , resuming his studies, until returning to the from 1785 to 1787 to earn a degree at . He was admitted to the bar in 1790 and practiced law until 1793, but found it all rather tedious.


In 1794 George Washington appointed him minister to where he honed his skills as a diplomat. In 1797 his father became the second President and he was appointed minister to , taking time to marry Louisa Catherine Johnson. In 1800 his father lost his bid for reelection, but in quick succession, John Quincy was elected to the Massachusetts State Senate and then to the U.S. Senate, but was forced to resign by the Federalists whose party he had earlier abandoned. In 1809, President Madison appointed him minister to . In 1813 he negotiated the end to the War of 1812, and in 1817 President Monroe appointed him Secretary of State which, at the time, was the stepping stone to the presidency.


Though the credit goes to those whom he served, John Quincy was involved in most of the major events and issues, negotiating the acquisition of East and West Florida from Spain, along with the extension of the U.S. border to the Pacific Ocean. He would write the key passage of the Monroe Doctrine.


Perhaps most famously, he argued a case before the Supreme Court in defense of black prisoners of the slave ship Amistad, winning their freedom. In 1844, the gag rule was finally defeated.


Throughout all this time he had also fathered children, George Washington Adams, the first born, and John Adams II, and knew the loss of his beloved parents; his father dying on July 4, 1826, on the same day as Thomas Jefferson, as well the loss of his son, GW Adams.


In a long life of service to America, on February 23, 1848 he died in the House of Representatives.


It was not so much he was the son of a famous, gifted man, but that he too became one as well by dint of long years in the service of his nation. He was a patrician, multi-lingual, devoted son, husband and father, but he was also the last in the lineage of the Founders and those presidents who followed him would seem smaller until a young lawyer named Abraham Lincoln was elected.


has, for the most part, been fortunate in the choice of men who were elected to its highest office. We need to get lucky again.

The good news this morning is that, according to the pollsters, Romney has captured the Electoral College.

I certainly hope Romney and the Republican Party capture the leadership of the Republic in November, as in 2013 we face a great crisis that could spell doom for the United States of America.

Yes, I know regardless of who wins, the next four years will be tough on us all - the country's economy will crash soon like a ton of bricks - however, the difference a Republican victory will make is the difference between a survivable aircraft accident and a "crash and burn" where everyone goes up in flames.

Like England's Churchill in 1940, in 2013 Romney has nothing to offer America but "blood, sweat and toil."

@Ronald - I will take blood, sweat, and toil over empty promises, broken dreams, and the idea that I must slave to pay for others to have a free ride any day.