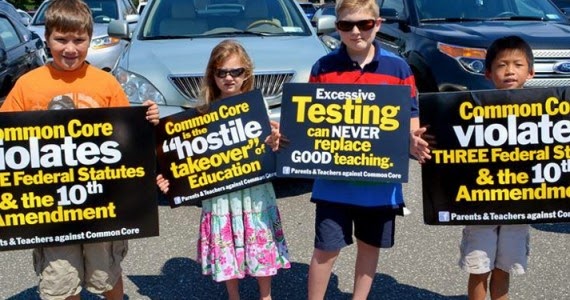 
“A lie told often enough becomes the truth,” said Vladimir Lenin who led the revolution that imposed Communism on Russia.


When he wrote, ‘Mein Kampf’, Adolf Hitler said “whoever has the youth has the future.” In his vision for the Nazi Party, education would be the key that ensured that he had ‘the youth’ of Germany fully indoctrinated.


All dictators and authoritarian regimes know that what is taught in their schools offers the greatest opportunity to maintain control over their societies.


That is what has been occurring since the introduction of the Common Core standards that the Obama regime has imposed on our national education system and the good news is that protests against it from concerned parents and others are beginning to increase and gain momentum.


Teachers will tell you that “one size fits all” does not apply in the classroom and never has. Children learn at a different pace with some doing so rapidly while others need extra help and attention. Learning that is entirely dependent on ceaseless testing puts stress on every child and that is the most common complaint about Common Core.


Education in America has been in decline since the 1960s when the teachers unions gained control over the process, putting themselves between the local boards of education and parents. Would it surprise anyone to learn that the Department of Education was established by President Jimmy Carter who signed it into law in 1979? It began operation on May 4, 1980. You will find no reference, no mention of education in the U.S. Constitution and it should not be a function of the federal government.


In a recent commentary by Joy Pullmann in The Daily Caller, she said, “The latest scheme is the field testing of Common Core assessments. This spring more than four million kids will be required to spend hours on tests that have little connection to what they learned in class this year and will provide their teachers and schools no information about what the kids know.”


“Parents who object to this scheme,” said Pullman, “face bullying and harassment from public officials. From New York to Denver to California, some schools are responding by forcing kids who opt out to sit at their desks and do nothing during the several-hour tests. Normal people call that a ‘time out’ and it is a punishment.”


Wyoming has become the first State to block a new set of national science standards that address climate change. In Michigan last year a group of protesters stopped the State from adopting the science standards.


Here are some excerpts of what the science standards teach as “The Essential Principles of Climate Science.”


# “The impacts of climate change may affect the security of nations. Reduced availability of water, food, and land can lead to competition and conflict among humans, potentially resulting in large groups of climate refugees.”


# “Humans may be able to mitigate climate change or lessens its severity by reducing greenhouse gas concentrations through processes that move carbon out of the atmosphere or reduce greenhouse gas emissions.”


# “The most immediate strategy is conservation of oil, gas, and coal, which we rely on as fuels for most of our transportation, heating, cooling, agriculture, and electricity. Short-term strategies involve switching from carbon-intensive to renewable energy sources, which also requires building new infrastructure for alternative energy sources.”


From “A Framework for K-12 Science Education” children are to be taught that “If Earth’s global mean temperature continues to rise, the lives of humans and other organisms will be affected in many different ways.” Only the Earth’s mean temperature is not rising! The planet is in a natural cooling cycle that is now seventeen years old, meaning that none of the students in today’s schools have ever experienced a single day of “global warming.”


By the end of grade 8, the Framework teaches that “Human activities have significantly altered the biosphere, sometimes damaging or destroying natural habitats and causing the extinction of many other species.”  This, too, is untrue. The U.S. Endangered Species Act, despite listing thousands of species, has not officially “saved” more than a handful at best and this assertion is questionable.


By the end of grade 12, students are expected to believe that “Changes in the atmosphere due to human activity have increased carbon dioxide concentrations and thus affect climate.” While it is true that there has been an increase in the amount of carbon dioxide this is a good thing because it is an essential factor in the increase of all vegetation that includes food crops and healthier forests. Moreover, this increase does not play any role in the Earth’s climate.


The central theme of these “science standards” is to teach that we should be reducing our use of fossil fuels, the primary energy sources our nation and the world requires. What these standards do in reality is repeat and reinforce federal government laws and regulations to justify its CO2 emissions regulations based on the current method of computing the Social Cost of Carbon, but these "costs" are pure fiction.


None of the computer models that have predicted global warming over the past four decades have been accurate. None are capable of representing the state of the Earth’s vastly complex climate.


The sooner Common Core is removed from the nation’s education system, the better.

The die is cast for America.

It's either revolution and civil war or death by Communism.

One of the worst things we've observed in modern education is the failure to teach kids to read properly. Most schools ignore the phonetic basis of the English language and simply encourage the kids to memorize the most frequently used words in popular literature -- as if they were pictures -- and leave it at that. This causes severe under-development of the left side of the brain (the part that sequences, and scans, and puts one thought after another) and over-development of the associative right side of the brain, often resulting in dyslexia and ADHD.

Imagine, for example, being presented with these 25 words as your first exposure to reading:

What could you do but memorize whole words as if they were pictures?

But now imagine being presented with these 25 words:

Almost immediately, with just a tiny bit of help from a parent or teacher, you'd be scanning from left-to-right, recognizing common word endings, sounding out unfamiliar words, etc.

My wife and I were so incensed when we saw what was happening in our local schools (and found that we, like Flesch, could do very little about it) that we wrote a do-it-yourself teach-your-kid-to-read course for any parent who wants to head off (or undo) what the schools are doing to their kids. It's free and it's here:

What is happening in education is we teachers are not giving the students the skills to problem solve. Reading is a perfect example. As the writer above said, memorizing is what is being taught, not the skill of deciphering. Couple no skills with students with little desire to work through a problem and you get chaos.

But Common Core solves that by allowing more than one correct answer for a question. Now we have relativeness. Our recent training for Common Core explained that to us, at least until the computers crashed. 40 teachers in a room and technology stopped us short. What will happen to students?

Some of the reasons I am retiring in six weeks after 31 years of teaching.

One size fits all has destroyed state education in the UK. Sadly, it's my generation, the 60s graduates, who are responsible for this. However, the Free Schools initiative launched by the Coalition is a fight back, handing education back where it belongs - to parents.

The basics worked well for generations... Then there was *new math*, and it was a disaster.. I have managed quite well to not use algebra for the last 45 years or so, new math was a joke though...

And asking questions like "If Tommy has 2 Mommies and they both get pregnant from a *donation* of an acceptable donor.." It's pure garbage...

As a retired public school teacher I am convinced that our only hope is to rescue our children from the public (government) schools and raise a godly generation.

Public schools cannot be redeemed. Saying we should not abandon them is like saying the passengers of the Titanic should have stayed aboard because the band was playing good music and the captain was a good man.

We must RESCUE OUR CHILDREN!

I just saw a commercial on TV promoting Common Core. As if the endless Obamacare commercials aren't bad enough, now they're going to propagandize us with our own money for this garbage. Here in Ohio, they put inserts in our property tax bills encouraging people to apply for all sorts of benefits too ...

There should be some sort of law against using tax money to promote these government programs. If a program is worthy of the public's interest, they shouldn't need to be encouraged to use it. The least the entitlement class can do is make the effort to seek these programs out for themselves. Of course we all know why they're doing this ... the more people they can hook on these programs, the easier it is to buy their votes.