The Methane Hoax Cranks Up 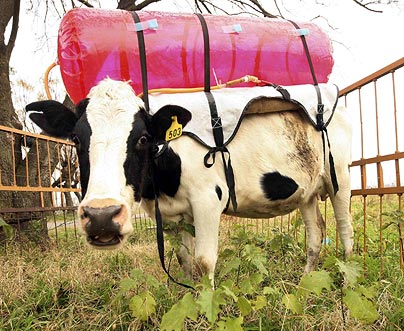 
Having spent decades trying to convince everyone that carbon dioxide (CO2) was a “greenhouse gas” that was going to cause the Earth to heat up, the same environmental charlatans are now embarking on a campaign to do the same with methane. In the U.S. the first move was announced by the White House in late March.


The carbon dioxide hoax fell apart in the wake of a cooling cycle affecting the Earth that began around 1997 and continues to this day. Warming and cooling cycles are natural events and both are tied to the activity or lack of it of the Sun.  Humans have nothing to do with the climate other to enjoy or endure it.


Why methane? It has a lot to do with the development of hydraulic fracturing, commonly called “fracking”, and the way it unlocks natural gas, aka methane, all of which portends an America that is energy independent, along with its huge reserves of coal and oil. If, of course, the government permits this to occur.


As we know, the Obama administration does not want that. It would mean more jobs, greater prosperity, and the ability to pay down the national debt, not to mention drive down the cost of electricity, gasoline, and everything else that depends on energy.


Despite the cooling cycle that is likely to last for many more years, Steve Hamburg, chief scientist for the Environmental Defense Fund, was quoted by the Washington Post saying that “ounce for ounce, methane is 84 times as potent as a greenhouse gas over 20 years” compared to carbon dioxide. “More than a third of the warming that we’ll see as a result of today’s emissions over the next couple of decades comes from, essentially, methane. We need to remain focused on carbon dioxide emissions, but doing so is not enough.”


Excuse me, but the Environmental Defense Fund and countless other Green advocacy groups have been focused on carbon dioxide for decades and the Earth is cooling, not warming. What part of this does Hamburg not understand?


James M. Taylor, the managing editor of Environment & Climate News, a national monthly published by The Heartland Institute, reported in January that “Natural gas fracking is not causing a spike in the U.S. methane emissions”, citing Environmental Protection Agency data. “Methane emissions specific to natural gas are in a long-term decline, down ten percent since 1990 and down seven percent since 2007 when the fracking boom began.”


The Washington Post, however, asserted that emission levels “are set to rise by 2030 as shale oil and shale gas production expands in the United States.” Do you remember all those predictions about the increase of carbon dioxide emissions and how, in ten, twenty, fifty or a hundred years, the Earth would heat up?


This is not about methane, it is about finding a way to shut down fracking and the extraction of natural gas and oil in the same way the Obama administration’s “war on coal” has caused the loss of over 150 coal-fired plants that until it began, were providing electricity. Reducing sources of electricity drives up its cost to everyone. As more natural gas came on line by 2013 it had become the second greatest source of U.S. electricity, but overall the amount of electricity produced was less than in 2007 before the war on coal began.


A natural component of the Earth, it has a number of sources, but one that has also caught the eye of government regulators involves cow flatulence and belching.


The White House has proposed cutting methane emissions from the dairy industry by 25% by 2020. The Environmental Protection Agency has been tracking cow farts since 2012 and now the dairy industry has to worry along with the oil and gas industry. In addition to the EPA, the Bureau of Land Management will be announcing “new standards this fall to reduce venting and flaring from oil and gas production on public lands.”


It’s often best just to let the Greens speak for themselves, revealing their never-ending efforts to attack the energy industry that keeps our lights on, heats and cools our homes, and fuels our cars and trucks. “President Obama’s plan to reduce climate-disrupting methane pollution is an important step in reining in an out of control industry exempt from too many public health protections,” said Deborah Nardone, the director of the Sierra Club’s Keeping Dirty Fuels in the Ground campaign.


“However,” said Ms. Nardone, “even with the most rigorous methane controls in place, we will still fall short of what is needed to fight climate disruption if we do not reduce our reliance on these dirty fossil fuels.”


What the heck is a climate disruption? A blizzard, a hurricane, a flood, tornadoes? None of these phenomena have anything to do with using fossil fuels. This is the kind of utter drivel we have all been hearing for decades.

I've read that methane has 25 times the global warming effect of co2 a lot.
First time seeing an 84X claim.

Here's the thing though. There are planets literally awash in methane that show zero global warming effect.

The Moon Titan has a 5% methane atmosphere and the same surface temperature as it's naked, bare rock, neighboring moon, Hyperion.

When a global warming cheerleader from a Steyer funded advocacy group claims a different laws of physics for his pet cause, you know he is a liar.

Hell. If he opens his pie hole at all, you know he's a liar.

Anyway, it is not the first time (even if the matter is "strangely" kept under cover, that the equivalency between CH4 and CO2 moleculas is pinpointed to be very different from what the UN-IPCC was supporting in his AR2.

Look at the 2011 Study released by the Cornell University - Ithaca/NY-USA, titled: "Methane and GHG footprint of natural gas from shale formation".
Useful reading. Than, help to fight this huge total speculation and ideology by the usual greens lobbies.