Much Ado about the Ukraine


Events in the Ukraine are now big headlines and the topic of a torrent of commentaries by experts on Russia, the European Union, NATO and related subjects. The whole thing began after protests forced its president to flee to Russia, followed by the Russian Federation’s annexation of Crimea as disputes between Eastern and Western Ukraine broke out.


At the time and still now I thought it was a predictable action and one that did not involve “invading” the Crimea since Russia has for many years had several thousand troops already stationed there to service and protect its military and naval facilities. Rather than wait around for the Ukrainians to resolve their conflict, the Russians took the reasonable, rational action of annexation. Crimea had been a part of Russia for hundreds of years and the Ukraine was as well. The national language there is Russian.


The problems the Ukraine has encountered began with public rejection of its president, Victor Yanukovych, a fellow who preferred alignment with Russia than the West. Many Ukrainians thought this was a bad idea, but it seems now that many others had no objections. The main objections appear to have been the dismal governance of the nation, replete with major corruption.


The problem Vladimir Putin poses today is the problem that Russia has always posed for any nation on its borders. From the czars to the commissars, it has a long history of imposing control on its neighbors. They were regarded as a buffer zone. Russia had been unsuccessfully invaded by Napoleon and, after being betrayed by the Nazis with whom they signed a deal to split Poland, they wanted territory between them and Europe. When the Soviet Union collapsed in 1991, those satellite nations declared their sovereignty once again, happy to be free and to embrace Western Europe.


NATO, a European mutual defense organization, was created to respond to what was seen as the potential for Russian aggression. As a member, the U.S. is committed to join in their defense. World War Two was followed by over forty years of “containment” by the West. When in 1992 the U.S. Senate ratified NATO expansion to include nations that bordered the former Soviet Union, it set up the present tense situation. Ukraine, however, is not a member of NATO.


Interviewed in 1998, George Kennan, the U.S. diplomat who was ambassador to Moscow in 1952 and who authored the “containment” policy adopted by the U.S., said the expansion of NATO was a very bad decision.


Presciently, he said, “I think the Russians will gradually react quite adversely and it will affect their policies,” adding “It shows so little understanding of Russian history and Soviet history. Of course there is going to be a bad reaction from Russia and then (the NATO expanders) will say that we always told you that is how the Russians are—but this is just wrong.”


On April 28, the Associated Press reported that President Obama said of increased sanctions on Russia, “We don’t yet know whether it’s going to work.”


Nothing else in the Obama foreign policy regarding Russia has worked since the famed “reset” in his first term so he’s probably right. On a personal level, not just Putin, but most leaders of foreign nations have concluded Obama is too weak and too incompetent to be treated with anything other than the courtesy his office requires.


Thomas Graham, a former senior director for Russia on the U.S. National Security Council staff from 2004 to 2007, recently expressed his view of the current situation in the April 28 edition of the Financial Times. He dismissed a new version of “containment” saying “It will not work. Nor will it advance U.S. interests. Economically, Russian is impossible to isolate.” 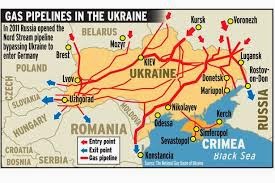 That’s true, but its economy is primarily dependent on oil and natural gas sales. If the prices of either were to fall, its economy would go with it. As it is, money is fleeing Russia, investment has halted, and its present threatening posture toward Ukraine may make Putin a hometown hero, but in the rest of the world, he is trouble with a capital T. As for Ukraine, its economy it’s even worse. But Russian pipelines runs through it to Europe. That is reason enough for Russia to show some concern for events there.


Whatever Russia does, the West can be counted upon to wimp out, doing little or nothing. In this case, staying out of the internal dispute in Ukraine may be the wisest course of action.


At home we have watched the influence of the United States decline from the day Obama took office. He has made matters worse by engaging in the reduction of our military capabilities. Until Obama leaves office, there is little that can be done to reverse this lamentable trend.


As the White House and the rest of us watch from the sidelines, we will hear a lot of empty rhetoric. Putin will be called a war monger, but he just wanted to protect Crimea. If he can covertly subvert Ukraine enough to gain more influence over its eastern half, he will try.

I cannot weep much for a nation with historic ties to the Nazis and one in which anti-Semitism is still virulent. This is hardly a nation to which the U.S. should be lending millions with loan guarantees for billions.


What happens to the Ukraine is a matter for the Ukrainians to address, not us.

I agree with you, Alan.

The Ukraine is "A Bridge Too Far" for America.

After all, we are up to our chins with Obama mandated totalitarianism.

For once Obama's failure to take action would be welcome. Events would benefit if there were no sanctions of Russia.

The anti-democratic coup d'etat that removed Yanukovych was supported by and maybe engineered by the US/EU/NATO. The removed President had won huge majorities in the east, Crimea and Odessa, amounting to from at least 60% to over 90% of the votes; in the west he lost by similar majorities. So this was a deeply divided country even before the coup.

Large majorities in the east, Odessa and a few small pockets in the west reject the oligarch junta and refuse to grant it any legitimacy. Significant parts of the military and national police have also repudiated the authority of the junta. So, the Ukraine is even more divided today than it was at the time of Yanukovych election.

If the US/EU/NATO were to remove the junta and make it clear that the oligarchs will have no role in any future government, Ukraine might be saved. But instead they continue to support the oligarchs. Consequently, partition is the only possible outcome, probably assisted by Russian intervention.

There is still time to avoid a large-scale war in Europe, which would almost certainly go nuclear. But this requires that US/EU/NATO climb down and seek some sort of compromise. Instead, they continue to increase the rhetoric. Russia will never accede to Ukraine being in NATO and will fight to prevent it. They will bear any level of sanctions and will impose their own.

Personally, I don't care what happens in the Ukraine and Crimea, we have more in THIS nation to worry about...

The reports that I found indicate that the march actually actually took place on April 27, and was organized by a guy named George Mykhalchyshyn.

The organizers announced beforehand that they would not have any "provocative" symbols, only the Ukrainian flag, and the city flag with the lion (after which the city is named).

However, the Right Sector and other parties declined to participate

There is also a historian who pointed out that most of the participants in the march do not understand history and are mixing Stepan Bandera, the division, and the nationalist movement for freedom.

Thanks, Guy, for the updated information. I had to go with what I had at the time.