And, Now, for Some Good News! 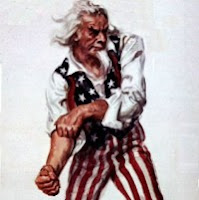 After the State of the Union speech and the instant analyses on television and the punditry that follows on newspaper’s editorial pages and, of course, on news/opinion websites and countless blogs and forums, the tendency is likely to dwell on how it portends more of the same bad policies.

It is obvious to the “experts” and to the general population that this President and Congress has burdened the nation with an insane amount of debt, something in the area of $45,000 for every man, woman and child. Babies born today will arrive with that burden. That’s not what American’s voted for in 2008. That’s not what they wanted or expected in 2009.

That, however, is what they got and what they will continue to get in the contemptuous nonsense that pours forth out of the White House like an infected wound. However, the triage of the American economy and future began in Virginia, in New Jersey, and in Massachusetts. The next bailouts you will read about between now and next November will be Democrat members of Congress announcing they will not run again.

“Après moi le déluge” is attributed to the French king, Louis XV (1710-1774) who bankrupted his nation and would cost his grandson, Louis XVI, his head in a revolution (1789-1799) that went so badly that Napolean eventually took over and annointed himself Emperor. If only Barack Hussein Obama had the old king’s grasp of economics and history.

The Tea Party movement is the modern equivalent of the American Revolution that went quite well, albeit taking some seven years to wear out the British resolve to hold onto its colonies. Within six months, the new nation had signed agreements with Great Britain to get trade going again though, in 1812, there was another disagreement involving a bit of military conflict. Since then, we have been good friends through thick and thin.

I cite all this history because the history of America, along with a careful analysis of its demographics, its population, native-born and naturalized, portends that, once we get past the megolomania and Marxist ideology of the current pretender to the throne…oops, I mean to the Oval Office, America is ideally poised to dig itself out of its current financial difficulties.

And that, dear reader, is the good news!

An excellent analysis of the current and future demographics of the United States appears in an issue of World Affairs. It is titled, “Undying Creed: The Acceleration of Our Exceptionalism”, written by Joel Kotkin, a scholar at the New America Foundation.

It is important to keep in mind that America has had some really bad and mediocre Presidents in his short history. We are dealing with only the 44th one and he, like several of his predecessors will be assigned to the chapter titled “What Were We Thinking?”

Kotkin has looked at the population trends around the world in places like Europe, China, India, Japan and South Korea, and come up with some very interesting conclusions. Unlike these nations, the American population has a higher rate of fertility, assuring new generations to be raised with values that have led to what is called our national “exceptionalism.”

Americans work hard. Harder, in fact, than most other nations and the reason is that we believe that hard work will lead to a better life, not one on the dole from the government. We attract skilled labor from nations that don’t offer as much opportunity as we do. And, while our population is expected to add at least 100 million people by 2050, it will not consist of a largely aging population in places like Europe and the Far East that will outnumber its more productive members. Even our older people will continue to work well beyond “retirement” age and are likely to become a rich source of volunteerism.

Then, too, Americans like raising children, have a strong, commonly shared moral code, and religious values. According to a recent Pew Global Attitudes survey, about sixty percent of Americans think religion is “very important.” A Marxist will never understand this.

While we just avoided a total financial meltdown (largely by infusing billions into several banking institutions---eagerly paying it back) the real beneficiaries have been the many local banks that avoided the high risk loans and other investments. All across America they are having the assets of failed banks transferred to their administration as the government steps in to avoid the horrors that befell Americans in the 1930s. This also accounts in part for the slowdown in credit and loans by both large and smaller banks as they get themselves back to normal, prudent banking standards.

Contrast the Recession’s impact with Japan whose “rate of decline in Gross National Product was three times that of the U.S., while Germany and Britain contracted by twice as much.” America’s economy is simply more resilient. We have lost a great number of jobs, but they will return more swiftly than in other nations. If, of course, the government gets out of the way!

By 2050, Americans will look different. The infusion of Asians and Hispanics will lead to a new kind of American civilization that will exist “across the entirety of human cultures and racial types. No other advanced populous country will enjoy this kind of ethnic diversity.”

Kotkin predicts that America “will probably not be the hegemonic giant it remains today, but the America of 2050 may well evolve into the one truly transcendent superpower in terms of our society, technology, and culture.”

By the time 2010 ends, President Obama will have been politically neutered. Power will shift to a chastened Republican Party whose new leaders will renew the fundamental principles of conservatism and redirect national priorities from the ideologies of liberalism to a pragmatic determination to meet our present and future needs.

John Quincy Adams said, “Courage and perseverance have a magical talisman, before which difficulties disappear and obstacles vanish into air.” We have seen courage in the town hall meetings, in the Tea Party events, in elections in Virginia, New Jersey, and Massachusetts. We have it in spades!

As always, an excellent piece..
One thing I would take issue with is the "chastened Republican Party"..
I really believe they don't get IT on either the state or national levels..
Take for example the current republican primary battle in Illinois.. Guess who's pushing the rino??

I haven't followed the Indiana race, but will check it out.