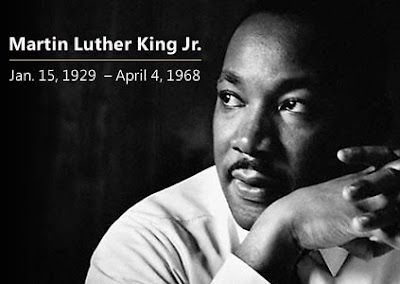 My life straddles the days of Jim Crow segregationist laws and the years following the Civil Rights movement, so I can recall buses in which Blacks did, indeed, sit in the back, separate drinking fountains and separate just about everything else. I spent enough time in the South to see racism at work and I watched enough of the civil rights marches to see it crumble from its own lack of moral justification.

That, perhaps, is why Dr. Martin Luther King is honored now with a federal holiday. That is why those of us who heard him speak recall, if not the words, at least the great moral passion he brought to his audience; a passion for justice and equality that went beyond mere legalisms.

I heard Dr. King speak at Drew University in Chatham, New Jersey in those heady days and then I went backstage and met him. It was a brief encounter and to this day I find it astonishing that I shook hands with someone who has become an American icon; someone whose name and cause is forever embedded in the fabric of our history.

There is no doubt that Barack Obama would not be President today if Dr. King had not put his life on the line in the 1960s.

Dr. King was an inspired orator. I doubt that Dr. King had a speechwriter and I doubt he needed one. This was a man that one felt had been touched by God, called to a greater duty, greater service, and the ultimate sacrifice.

That may sound hokey to those who discount the role of serious, committed belief in a greater power, but it was unmistakable in terms of the way this minister and son of a minister from Montgomery, Alabama led a boycott of the city’s bus system in protest of its demeaning “back of the bus” rules, and then expanded the cause to the nation.

It was the boycott that got the whole civil rights movement going. It was followed by “sit-ins” at restaurants, marches, and all manner of demonstrations, culminating with the August 28, 1963, Washington, D.C. event in which Dr. King delivered his famed “I Have a Dream” speech. I suspect no one else could have so stirred a nation as he did and surely none of the other speeches given that day are remembered.

It was a call to what Abraham Lincoln deemed the “better angels of their nature”; our capacity to live up to America’s best values.

The civil rights movement also included some very ugly riots in the ghettos of some American cities and, nearly fifty years passed Dr. King’s speech, too many blacks continue to lag behind the rest of society.

The civil rights spokesmen that followed in Dr. King’s footsteps have largely been a disappointment, race hustlers, and others who rode the movement to positions of political power.

This is to be expected because there was only one Martin Luther King, Jr., martyred for his steady faith in the goodness that could be evoked in the hearts of both black and white citizens.

It is important to remember that Dr. King was not calling for special privileges and dispensations based on race. He was demanding equality before the law and an end to the codified racism of exclusionary laws.

Thank you for your post. It is good to read an account from someone who actually met Dr. Martin Luther King Jr. and experienced the extreme racial segregation of his time period. I appreciate your reflections on this special, special man.

I use Facebook, a lot, I syndicate the blog and I have a Fan Page... I have dumped close to 70 people from a so-called *friends list* today...

Today he'd be an Obama supporter and have his lips firmly attached to *The Brothers* arses...

Who do people think taught Je$$ie Jack$on and Al $harpton to be the abba-dabba scam artists THEY are?