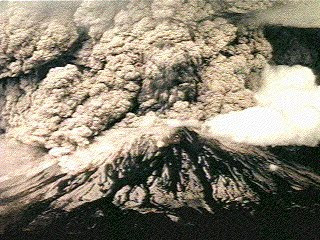 The earthquake in Haiti is a perfect example of the arrogance of environmentalists who are always running around crying “Save the Earth” or making claims that any or all forms of life are going extinct.

For three decades we have listened to these charlatans claim that the Earth was heating up to a point where, if we didn’t cut back or replace all forms of energy, oil, natural gas and coal, it would become a vast desert devoid of life.

Then, in 1998, the Sun began yet another of its eleven year cycles of low sunspot activity, a diminution of magnetic storms on its surface, and the completely predictable result was a new, perfectly natural cooling cycle, a prelude perhaps to a predictable new ice age.

When I do radio, I like to remind listeners that Mother Nature has a message for humankind. It’s “Get out of the way. Here comes an earthquake, a volcano, a flood, a forest fire, a mudslide, a blizzard, a hurricane, et cetera.”

In an excellent book, “Devastation! The World’s Worst Natural Disasters” by Lesley Newson, she starts by noting that “The Earth is a rocky sphere nearly 8,000 miles in diameter. It is surrounded by a shroud of gases more than 60 miles deep. Sandwiched in between is a fragile layer, only a few miles thick, where humans are able to survive. It is perhaps not surprising that in this tiny zone of life there are occasional upheavals that make survival impossible.”

Haiti is the perfect definition of devastation. As bad as the earthquake’s damage has been, the aftermath will be testimony to the way those not killed in the initial quake will fall victim to the diseases that will ravage the area as well as the difficulty to provide immediate medical care. There are an astonishing number of ways humans can die and Mother Nature is utterly indifferent.

What makes matters worse, however, is the indifference of environmentalists who would deny everyone access to the energy sources needed to fuel a complex, technological, global society beginning with the provision of electricity. The Earth is not running out of coal or oil, only the right to mine it and drill for it.

The first thing to go in Haiti was its communications system. The next was the capacity to fuel means of transportation. The lack of a government was nothing compared to the long-standing failure to provide clean water and, worse, the failure to educate Haitians to compete in a world where literacy and modern skills are vital to survival.

Another factor that will kill many Haitian survivors is the spread of disease by insect and rodent pests. Environmentalists have striven to deny Americans and all others access to one of the greatest developments of the modern era, pesticides with which to control the mosquitoes, the ticks, the fleas, the rats and all the other creatures that constantly threaten humanity.

In April 2005, I wrote a commentary, “The Black Plague and its descendants” that was published in The Washington Times. It noted that the Black Death made its way from inner Asia and, in 1347, Yersina pestis arrived in Europe. What followed was the second greatest catastrophe in the human record. By the time it ended around 1352, a quarter of Europe’s population was dead.

Only World War II killed more people. And yet, as this is written, millions die of malaria in Africa and Asia because some bureaucrat in the Environmental Protection Agency banned DDT.

History gives ample evidence that the Earth is a dangerous place, in addition to earthquakes, it is ringed by volcanoes and, in the U.S. the beloved Yellowstone National Park is one giant volcanic caldera which, when it explodes, will alter life as well as take it in the hundreds of thousands, if not more.

Scientists track the nation’s “hurricane season” and all manner of effort is made to anticipate them and warn residents, but even that was not enough when Katrina hit the Gulf States on August 29, 2005.

It is stupid to politicize this event, blaming former President Bush as if he either caused it or failed to respond effectively. No President and no government are prepared for a Category Five hurricane. It was just as stupid not to flee when told it was coming.

It is not for nothing that we call such events “an act of God”, but in reality they are an act of a huge planet, unique among all others in our galaxy because it has spawned all manner of life, including our own.

It is a planet subject to the action or inaction of the Sun. Nothing we do alters that simple fact. It is a planet that must hope to dodge any of the thousands of asteroids that threaten it. It is an Earth whose tectonic plates shift unpredictably. Its interior is unimaginably hot and whose circulation of molten rock carries the heat to the surface, allowing its mantle to keep the core stable.

What I am arguing for is a bit of humility, something that humans are not famous for.

There are six billion of us and the world’s intelligentsia scorns us and seeks ways to ensure as many as possible will die by thwarting the development of genetically modified crops to feed us, by stopping the building of more power generation plants, by making war in the name of a misguided belief in the superiority of a religion like Islam, or the evil desire to grow rich and powerful by ruling vast populations.

In Iran, ruled by certifiably insane ayatollahs, the people are in the streets to overthrow a brutal regime that is determined to create its own nuclear weapons and the world is standing by instead of uniting to destroy their means to do so. A so-called international organization, the United Nations, is shot through with corruption and both unwilling and unable to assert the sanctions to stop the inevitable outcome of doing nothing.

And here in the United States, we have fallen victim to a regime so dedicated to the destruction of the nation’s economy that we wait on the election process to save us from ourselves.
Posted by Alan Caruba at 9:46 AM

Danny Glover,Al Gore, Nancy Pelosi, Harry Reid,"O", Mz Jackson -EPA, head of peta, Michael Moore and their buddies, shakem all up an pour em out. What do ya git?? Not enough common sense to tie a pair of shoes.
All I can say Mr. Alan is AMEN!!!
It seems a shame that Dr. King's dream has turned into a nightmare..

I completely agree with your assessment, but would just add the following to help dispel some misconceptions about that specific item. While it has no affect on your conclusions, it is still important to know, IMO.

"It is stupid to politicize this event, blaming former President Bush as if he either caused it or failed to respond effectively. No President and no government are prepared for a Category Five hurricane. It was just as stupid not to flee when told it was coming."

Actually, Katrina was only a category 3 when it made landfall, not a category 5.

There are many myths (outright lies, actually) that are still taken as fact because the MSM repeated them so often. Here's an excellent refutation of the worst of them, with an objective analysis of what the real problems were and how to fix them (I wonder how much of what's right they've done to date).

Actually, it occurs to me that rather than not affecting you conclusions at all, the pervasive disinformation on Katrina that persists to this day is even more proof of how right you are.

When the facts don't support them, they make "facts" up. They are only interested in advancing their dysfunctional agenda, not in truth; only in control of others, and not at all in making anyone's life better.

As a first-time reader of your blogs, all I can say is "Hallelujah!" some one get is besides me. I appreciate your rational and fact filled approach to getting the truth out and displaying the absurdity of current American political and cultural lies and misconceptions.

First came the death of common sense, then the death of outrage, and if we don't act responsibly it the death of a nation will follow.... our nation! Thank you for being a great American and Patriot!