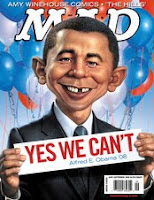 I have a friend who lives with his blind Malamute dog, Boris, in a cabin deep in the Missouri woods. He is as self-sufficient as one can be, but he is not one of those survivalists who are waiting for the Homeland Security to show up. He has to go into town to get dog food and pipe tobacco, although he has been brewing his own hard cider of late. It’s his latest hobby.

He is hardly cut off from the world and that seems to be his main complaint because he is of the opinion that it is largely populated by stupid people and, frankly, it is hard to disagree. As a result, we are both richly rewarded with evidence on a daily basis.

For example, it is abundantly clear (except to stupid people) that a majority of voters in 2008 elected a fool to be President of the United States of America and the presumed “leader of the free world.” Do not ask the presidents of France or Russia, or the Prime Minister of England for their opinions of him. For that matter, don’t ask former President Bill Clinton, who’s still waiting for his cup of coffee.

One of Obama’s first official acts was to dispatch Air Force One to do a low fly-by of New York City for a photo. For some reason, that scared the hell out of New Yorkers.

It is hard enough to get through life when most people around you have concluded that you are a dunce, but when it is America being judged as stupid, led by stupid people, and populated by too many stupid people, it is hard to get other nations to cooperate.

My own email and comments on my blog suggest that there are still plenty of very smart people in America and I think the Tea Party movement is evidence of that because these folks are looking for a home that is neither Democrat, nor Republican, but just sensible and a place where someone has actually read the U.S. Constitution.

As we close in on the anniversary of President Obama’s inauguration (remember the nearly two million folks that showed up in the freezing cold, thrilled to be a part of the hopey-changey thing?), but even by the kindest standards of judgment, it is clear that he is utterly clueless in an over-educated way that reeks of condescension.

You get the feeling that he has Tele-Prompters at the breakfast and dinner table in order to provide him with small talk. Without them, listeners begin to wonder if, at some point, he suffered some form of brain damage.

Worse, the next in succession is a Vice President who recently held a closed-door meeting on “transparency” in government. Behind him wait the Wicked Witch of San Francisco, Nancy Pelosi, who burns through $60,000 of jet fuel each way to and from the capital every week. Next in line is the Nevada troll, Harry Reid.

You have to be spectacularly stupid to blow billions of taxpayer dollars “bailing out” General Motors and Chrysler when the ordinary bankruptcy process would have spared us the insanity of owning a failed auto company. Capitalism rewards success and scorns failure, but those in power these days think capitalism is a bad thing.

Given the pathetic performance of other government-owned entities such as Fannie Mae and Freddy Mac and the fact that they have been exempted from the “financial responsibility” taxes Obama wants to impose on banks, it comes as no surprise that their executives collected multi-million dollar bonuses at the same time some government official was railing against similar bonuses for Wall Street bankers and investment executives.

In the midst of the worst financial crisis this nation has faced since the 1930s, how stupid do you have to be to try to “reform” Medicare in ways that slash billions from it while adding more people to its rolls? By what stretch of the imagination does Congress think it has the power to require people to buy insurance they do not want? And, it turns out, exclusively from the government.

What ever happened to the free marketplace where competition determined prices? There’s a reason insurance companies run all those TV commercials. Didn’t anyone in Congress or the White House ever take Economics 101?

The Founding Fathers said over and over again that the only way a republic such as ours can survive is if it is led by men (and now women) of “virtue”, by which they meant people that weren’t in public service to plunder the treasury. They knew those elected to public office would not all be angels, so they put together a legislative process that slows the passage of laws to a crawl. All manner of impediments exist and we should be very happy that they do.

I grew up in an era before television when newspapers, radio, and the Movietone News were the main sources. This may seem odd to today’s generation, but during World War Two the media did not compete with one another to be the first to tell the Nazis when and where D-Day would occur or which island in the Pacific would be invaded next.

This is a far cry from Walter Cronkite telling Americans that our troops lost the Tet Offensive in Vietnam when we had actually killed thousands of the enemy, rendering them a terrific blow. That was the first war of the modern era which the media wanted the U.S. to lose. It has since been followed by both the Iraq and Afghanistan conflicts.

Well before 9/11 America was locked into a war with al Qaeda even if no one in the White House wanted to give it much thought. By treating the 1993 bombing of the Twin Towers as a criminal act, the U.S. set in motion its final destruction. Now we have a government that wants to extend the protection of the U.S. Constitution to captured terrorists and try them in the heart of New York City. Do not tell me that is not stupid!

Just what do you do with an overweight, slovenly, Muslim U.S. Army Major who was also engaged in a lively exchange of emails with a jihadist mullah in Yemen? You give him his discharge papers. When you don’t, you end up with thirteen dead soldiers while he stands around yelling “Allahu Akbar!” Today’s military is so politically correct the rules of engagement on the battlefield include offering candy and soft drinks to the enemy before actually shooting at them.

Putting an idiot like Janet Napolitano in charge of Homeland Security aptly fits the description of stupid, but a close look at the monkey cage of loonies attached to the Oval Office reveals more social misfits than you could find in a Beverly Hills rehabilitation center.

We are stuck with Obama and his merry band of morons until 2012, but we can begin to clean house in Congress in November 2010 thanks to the midterm elections.

It’s up to the people with common sense and good judgment to take charge of this nation through participation in all manner of civic and political organizations, through a constant deluge of Congress to stop Obamacare, immigration “reform” (how I hate that word!), and the strangling of the free market economy that has enriched those willing to actually hold a job and lucky enough to have one.
Posted by Alan Caruba at 1:04 PM

All I can say is, yep!
Here's a link that yall might like-
http://www.thefoxnation.com/judge-andrew-napolitano/2010/01/11/judge-andrew-napolitanos-constitution-and-freedom-part-1
Judge Napolitano,(the Napolitano with some sense), truly opened my eyes.It corresponds right along with the words you speak. I wish they would teach more of this in school, instead of "O",mmm,mmm,mmm.

I am Honored to be considered a friend Sir!

"...these folks are looking for a home that is neither Democrat, nor Republican, but just sensible and a place where someone has actually read the U.S. Constitution."

As someone who is Republican only out of dire necessity, I couldn't agree more!

"You get the feeling that he has Tele-Prompters at the breakfast and dinner table in order to provide him with small talk. Without them, listeners begin to wonder if, at some point, he suffered some form of brain damage."

I think it's sadly a much better than even bet.

As to Walter Cronkite (Krankheit in German means "sickness" and he was! (And, as you can see from that video, Hillarity approves.)

"Freddie Mae" should be "Fannie Mae" (no biggie).