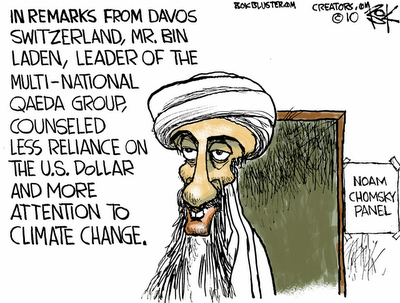 To the world’s experts on climate change, let us now add the name of Osama bin Laden to those of Al Gore; UN Secretary General Ban ki-Moon; the Chairman of the UN’s Intergovernmental Panel on Climate Change, Rajendra Pachauri; numerous heads of state over the years; House Speaker Nancy Pelosi; members of Congress still trying to pass Cap-and-Trade legislation; and the odious IPCC scientists who apparently colluded to foist false data on the public in order to further the fraud of global warming.

This is, of course, a short list given the vast number of people who attended the recent UN Conference on Climate Change in Copenhagen. It reportedly cost the taxpayers over a million dollars for the U.S. delegation and that does not include the cost of the President’s attendance. In his State of the Union speech, Obama received a chorus of laughter when he spoke of the “overwhelming evidence” of climate change.

Bin Laden is getting increasingly desperate in his appeals to the world’s Muslims and, in a recent audiotape, “he blamed the Western industrialized nations for hunger, desertification, and floods across the globe,” according to a report by the Associated Press.

Bin Laden’s real complaint, however, has always been that he cannot replace the Saudi royal family and control that nation’s oil and the revenues that flow from it. One of the many sons of a prominent Saudi family, bin Laden went off to aid the Afghans in their fight against the Soviet Union and, ironically, it was covert American weapons aid that made their victory possible.

He could have settled for being a hero of that conflict, but like so many egomaniacs, he decided to fight the crusades over again and all subsequent Western influence in the Middle East in the name of Islam.

A succession of terrorist attacks flowed from that decision. U.S. embassies in Africa were bombed, an American warship was attacked in Yemen, and the most spectacular attack was, of course, the attacks on the Twin Towers in New York and the Pentagon in Washington, D.C. A fourth plane was brought down by its passengers.

Americans seem to have forgotten that George W. Bush responded forcefully to 9/11 and to the threat of Saddam Hussein to the entire Middle East. This is in contrast to President Obama’s futile efforts to get the Iranian ayatollahs to cooperate. Dictators are not famous for being nice.

As the AP report noted, bin Laden has mentioned climate change and global warming in past messages, but his latest on January 29 was the first to focus on it as a major theme along with the need to destroy the American economy. With regard to the latter, he seems to be getting a lot of help from President Obama who has tripled U.S. debt during the past year.

The significance of his latest audiotape seems to be a belated effort to piggyback the global warming issue at the same time it is crashing and burning worldwide due to revelations that the data on which it was based was deliberately falsified.

Claims that Himalayan glaciers were melting were false and this was made known to the IPCC Chairman Pachauri two months before the Copenhagen conference, but he managed to wait until after the conference to publicly correct the IPCC report.

Bin Laden’s bad timing suggests that his campaign is losing support. It is almost comical that he would try to enlist the support of global warming diehards in his quest to overthrow the Great Satan, America, and the Little Satan, Israel, but there is nothing comical about his continued threat to the nation and the world.

The silence of Al Gore as the planet has cooled since 1998 suggests that even he knows that his self-enrichment plan is coming to an end. Only President Obama seems or pretends to be oblivious to the idiocy of cutting “greenhouse gas emissions” in the name of a planet that is not warming.

In this quest, Obama has now been joined by Osama.
Posted by Alan Caruba at 6:42 AM

Which is, I guess, why so many of Islamic lands are such oases compared to the deserts of the West, as here in Afghanistan.

As Winston Churchill said, "The effects are apparent in many countries. Improvident habits, slovenly systems of agriculture, sluggish methods of commerce, and insecurity of property exist wherever the followers of the Prophet rule or live.
......
No stronger retrograde force exists in the world."

And now, for an irresponsible opposing viewpoint from Barack Obama Al-Husseini, Grand Mufti of Washington...


"... From all accounts of his life and deeds, we read that the Prophet had a profound respect for fauna and flora..."

Too bad there wasn't enough room in that big bucket of respect for people as well.

The intent is clear with this - the intent is the same as a bully that makes a funny face at a kid in a schoolyard. Its a form of psychological terrorism.

I really cannot believe that anyone with an ounce of brain cells that doesn't believe he will be seated at the Rockefeller table when this is all over actually "believes" this nonsense.

Sadly, there are far too many people who think they will be seated at the Rockefeller table one day.

From the emails I have received and comments posted at CanadaFreePress.com that publishes my posts every day, there appears to be a strong belief that Osama is dead and has been for a while.

I am inclined to agree with this and keep wondering why the US government continues to express an official view that he is alive and is the voice of the audiotapes.

This is all past now. We are in the present where there is NO Bin Ladem and no terrorism! GOD BLESS AMERICA!