One Picture's Worth a Couple of Billion! 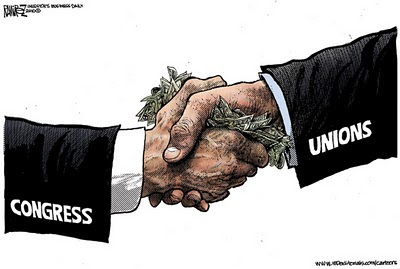 Mr. Alan, that cartoon says so much. I can think of several.
1.Unions are more important than the general public.
2.Another "Gen-Xer" who thinks the world owes them, instead of earning it.
3. How politicians believe they are not subject to the law and they are above US.
4. Politicians are for sale.
Several more I can think of, but my BP tends to rise when I do. So I gotta calm down a bit...ohmm..ohmm, buncha idgitz..
One of these days you might write something I disagree with, but I don't see it happening. See, we Rebels and Yankees can agree..

Ol James, this Yankee spent many years in the South and numbers many Rebels among his friends...and am glad to number you as one of them.