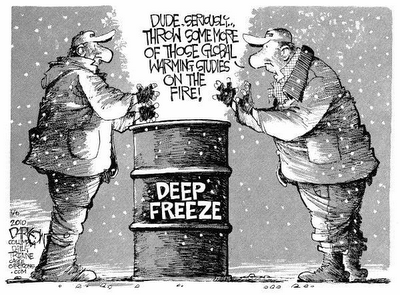 Once, very long ago, I used to be “a stringer” for The New York Times. My articles would appear in the New Jersey section and an occasional short book review would make it into the legendary newspaper.

My Father read the The Times more faithfully than an ayatollah reads the Koran or a Hasidim reads the Torah. Little did he know that, during the early years of Stalin’s regime, a Times reporter named Walter Duranty deliberately failed to report the deaths of millions of people in the Ukraine because Soviet communism demanded they obey or die.

Starting in the 1980s, The Times has led the greatest fraud of the modern era, the global warming hoax. It went through a succession of reporters who turned out articles that all asserted various claims attributed to a dramatic increase in the Earth’s temperature that was not happening. At one point, it published a story that the North Pole was melting.

The leading advocate of the global warming fraud has been Al Gore, a former Vice President who has enriched himself selling bogus “carbon credits” and investing in “renewable energy” businesses. His so-called documentary, “An Inconvenient Truth”, was filled with so many inaccuracies that a British court ruled it could not be shown in its schools without informing students of them in advance.

We know now, thanks to the “Climategate” revelations, that a handful of scientists, working at the behest of the United Nations Intergovernmental Panel on Climate Change deliberately distorted or invented climate data to further the fraudulent claims.

They were associated with the Climate Research Unit of the University of East Anglia in Great Britain, the Pennsylvania State Earth System Science Center, as well as U.S. government agencies such as NASA’s Goddard Institute for Space Studies. Most are currently being investigated for alleged abuses of the positions they held and questionable actions in which they engaged.

The release of emails detailing their conspiratorial efforts to advance their false data and suppress any that represented a contrary point of view destroyed what little credibility there was for the recent UN Conference on Climate Change held in Copenhagen. It collapsed like a circus tent.

So why, on Sunday, January 24, did The New York Times publish an editorial titled “The Case for a Climate Bill” in an effort to support the insupportable, the Senate’s Cap-and-Trade legislation?

The bill is superficially intended to put limits on greenhouse gas emissions, primarily carbon dioxide, that are alleged to be “causing” global warming. It is, in reality, a massive tax on the use of energy, harmful in countless ways to the nation’s economy and a burden on all producers and consumers.

Cap-and-Trade has no basis in science because carbon dioxide plays no role whatever in climate change and because the Earth has been in a cooling cycle since 1998; a cycle that legitimate climate scientists predict will last another decade or two.

It takes an enormous amount of gall to support this legislation claiming “The long-term trend in greenhouse gas emissions is up (the decade ending in 2009 was the warmest on record.)” No, a decade in the 1930s was the warmest. The last decade saw a constant decrease in temperature, leading to the record-breaking blizzards, expanding glaciers, and other indications that the Earth is cooling.

“Finally there’s the question of credibility: Mr. Obama said in Copenhagen that the United States would meet at least the House’s 17 percent target” of reduced CO2 emissions said The Times.

President Obama has virtually no credibility left and had to flee the Copenhagen conference in order to avoid being snowed in there and unable to land in Washington, D.C. which was also expecting a snowstorm!

This blind and desperate refusal to face the facts, let alone to report them, will ultimately destroy the famed “newspaper of record” and, if that happens, I will not mourn its passing.
Posted by Alan Caruba at 3:12 PM

I am reminded of a story. A group of scientist were assembled, along with God. The scientist argued several points by saying that technology could duplicate many things mentioned in the Bible, specifically life and man.
The Lord challenged them to make a man from a simple clod of earth. God quickly made his, a fine healthy specimen.
The scientist grabbed a clod of earth. The Lord interrupted and said." No, no scientist, you need to make your own dirt first!"
(I heard this on NPR, I listen to A Prairie Home Companion)
I agree we need to take care of this planet, BUT unless we can make our own elements, change the weather, tell the Sun when to rise and set...well....buncha idgitz!!

Why do stupid people keep doing the same things over and over again? Wishhing doesn't make it so, New York Times!

It reminds me of a chain smoker who is told he has lung cancer and he stops to buy cigaretts on the way home!

Wow Alan. You're really stubborn. It seems like won't allow a real discussion to ensue here. I admit, my first comment was knee-jerk and sarcastic, and I apologize for that, but really, I think I've been much more polite and respectful than many others whose comments you have allowed since. If you've happened to visit my blog, you've hopefully seen that I'm interested in dealing with facts and offering solutions regarding protecting the health of our children - I have 2 youngn's. The port pollution issue about which I blog is an important one to us here in Brooklyn and the rest of New York, and many all over the country, including in your home state of New Jersey. The EPA that you malign is doing serious work on this issue - it has little if anything to do with CO2 - it's about unregulated SOx, NOx and particulate matter, known carcinogens that poison our kids and elderly, that are present in huge %'s in ship diesel emissions. Perhaps you have a family member with asthma? They will benefit from these regulations. The EPA are doing a honorable thing here. I don't think your "black and white" depiction of them is doing anyone a favor, including, respectfully, yourself.

Adam, as you note, you have YOUR OWN blog. Why you feel it necessary to post your views on MINE when we are generally on the opposite side escapes me.

It would be as pointless for me to post a comment on your blog as for you on mine.

We disagree. You will have to live with that...and not likely find further access to the opportunity to post your comments.

I will be featuring this article in Friday's Green Notes...my weekly newsletter. Good job.

As for Adam; when I hear people saying that EPA is doing some good work and it isn't all black and white, I put this in the "Hitler made the trains run on time" category of thought.

I have no doubt as to his sincerity, but I would like to suggest that he needs to expand his choice of reading material. I would like to recommend that Adam start with Bjorn Lomborg's, A Skeptical Environementalist.

Best wishes to all.
Rich K.