The Lies About Green Jobs 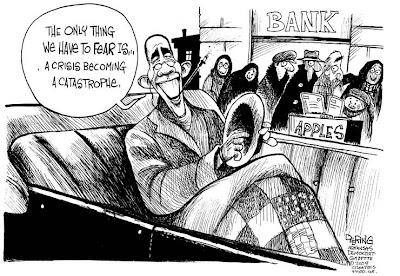 “I was impressed as never before by the utter lack of logic of the man, the scantiness of his precise knowledge of things that he was talking about, by the gross inaccuracies in his statements, by the almost pathological lack of sequences in his discussion, by the complete rectitude that he felt as to his own conduct, by the immense and growing egotism that came from his office, by his willingness to continue the excoriation of the press and business in order to get votes for himself, by his indifference to what effect the long-continued pursuit of these ends would have upon the civilization in which he was playing a part.”

No, this was not a judgment of President Barack Obama, though the description eerily fits him. It was the view of Raymond Moley, a Columbia University professor and member of President Franklin Delano Roosevelt’s “Brain Trust” who often wrote or helped write FDR’s major speeches. FDR’s policies extended the Great Depression for ten years.

Here are some facts worth considering every time Obama calls for an expansion or intercession of the federal government as an answer to the current financial crisis:

Social Security, a cornerstone of FDR’s administration, was established in 1935. After 74 years it is on the brink of insolvency because Congress gave itself access to its funds.

Fannie Mae was established in 1938 to facilitate home ownership. It has been around for 71 years. Congress has had to seize control of it and of Freddie Mac, established in 1970. Together, they presently own or guarantee about half of the United States’ $12 trillion mortgage market.

The War on Poverty started in 1964. One trillion dollars has been transferred to “the poor” and it has not worked.

The Department of Energy was established in 1977 to lessen dependence on the import of foreign oil. With 16,000 employees and an annual budget of $24 billion, the United States has imported more oil with every passing year while denying U.S. companies access to vast national reserves in ANWR and off our continental shelf. It is an abysmal failure.

All of these programs were put forth by liberals, now calling themselves “progressives”, initiated by Democrat administrations to advance what they call “social justice.” The Obama administration is hell-bent on “health care reform” that will put one sixth of the U.S. economy under the control of the federal government whose interventions in the free market have been the cause of the previous recessions.

In 2010, the Obama administration says it intends to relieve the job shortage by creating “green jobs” in the sectors of wind and solar power and biofuels. It has announced a program that will cost $2.3 billion, costing approximately $135,000 per job.

“Show me one other industry that requests and receives a nearly 30 percent taxpayer subsidy,” says Thomas J. Pyle, president of the market-based Institute for Energy Research. “If the President really wants to create an environment that will foster economic growth and job creation, he need not look any further than the domestic oil, gas and coal industries.”

In November 2009, a Washington Times editorial said, “’Green energy’ is proving to be no miracle solution to the nation’s monumental unemployment problems, and it is doing little to help the economy emerge from its deepest recession in decades, economists say.”

A large part of the administration’s $786 billion dollar stimulus bill was devoted to green or renewable energy projects, but the rate of unemployment continues to rise, the cost of gasoline and heating oil continues to rise in the face of the coldest winter on record in decades, and real jobs in energy industries are thwarted by Obama administration restrictions on the exploration and development of our national energy reserves.

Similar green jobs programs in Spain, Germany, and other nations that signed onto the UN Kyoto Protocols limiting carbon dioxide emissions have demonstrated that such jobs cost too much to create and eliminate other jobs in the process.

Following recent Climategate revelations, it is abundantly clear that so-called greenhouse gas emissions do not cause a non-existent “global warming” which was and is a massive science-based fraud.

Despite this, a Cap-and-Trade bill awaits a vote in the U.S. Senate that would impose a huge tax on energy use. At the same time, the EPA is claiming that carbon dioxide is a pollutant that must be regulated.

The lies simply do not stop.

So-called Green jobs depend on two of the most impractical and unreliable sources of electricity generation. Solar and wind farms require backup by coal-fired and nuclear power sources for the blatantly obvious reason that the sun does not shine full-time, nor do the winds blow full-time. These, plus biofuel producers, are parked on the doorstep of Congress to secure the subsidies they need just to be in business; subsidies that are derived from our taxes

Biofuels divert valuable crops like corn to create ethanol, driving up the cost for a gasoline additive that incongruously produces less mileage and increases the cost of the many food products that utilize corn.

America, the home to centuries-worth of massive amounts of coal, has a President who has openly declared war on the coal industry that currently provides half of all the electricity used by Americans. By contrast, solar and wind provide just over one percent!

When the President talks of “green jobs” he is lying to Americans who need real jobs. The stimulus bill was nothing more than a political “pork” bill and is providing no real surge in job creation. Indeed, the administration has claimed to have “saved” or produced jobs in non-existent Congressional districts.

Meanwhile, the members of the U.S. House and Senate have voted themselves $4,700 and $5,300 in new raises at the same time they have voted to deny a Social Security cost of living increase in 2010 and 2011.

The job of every voter in November 2010 is to remove from office every Senator and Representative that voted for and supported the Obama administration’s policies who will run for reelection.

Then, maybe, we can put America on an economic footing that will generate real jobs and put an end to the Green Lies about “green jobs”, environmentally inspired legislation, and the existing Green laws and regulations that are currently killing any hope of recovery.
Posted by Alan Caruba at 12:29 PM

Yeah, we lost 85,000 jobs in December, and Osama thinks we should be impressed if he comes up with a plan to "create" 17,000 "green" jobs. His idea of green jobs includes government jobs (wrong), non-permanent government works jobs (also wrong), and "renewable energy" jobs which have to be subsidized to make a profit. What we need are PERMANENT jobs in manufacturing or industrial companies - jobs that produce a product, and aren't a further drain on our economy. Every government job is a step in the WRONG direction, which nobody seems to understand. Each of these jobs does NOTHING to increase our GDP or our tax base, and requires several hard-working Americans to pay the taxes to fund it.

I'm all for exploring alternative energy resources and developing new ideas and technologies, and America has always been a leader in that respect. However, at the moment, we need lower taxes, cheaper energy, and a rejuvenation of our manufacturing base. Any plan that ignores those fundamentals is nothing but fluff.

Mr. Alan, I am sure glad that you and the majority of the folks that follow your Blog, have not drank the Kool-Aid.
Like Texas-Fred said about "GoreBull Warming", I like that.
We have been in single digits at night and it struggled to get to 29 today, NE AL.
I overheard a fellow say once.."if politicians are talking, well they are usually lying."

That's because those 'green jobs' are going to prisons and felons...who now are going to be able to VOTE!! Every day I feel like I am in the twilight-zone!!

If you really want to put America back to work let’s start building 20 new nuclear power plants now.
We’re going to need thousands of the highest paying jobs in America & billions of $$$ of capital equipment & materials.

With the completion of every nuclear power plant we’ll need to export less & less oil & produce a cleaner environment.

Alas, it’s not going to happen so just forget it.

Perhaps with a new administration and leadership, it can and will happen.

Since I believe that our current western credit system can only exist in one of two states (inflation or deflation/depression)
I would really appreciate your review of the economic principles proposed in the following ebook
http://www.smashwords.com/profile/view/povertyandthefoundationofeconomics
and your comments on any errors that you find. If you do not have the time to do
this, I would appreciate your assigning the task to your friends as an exercise.

Thank you for your time and attention in this matter.

@David. I am not an economist and cannot provide an opinion about your views. I regret I lack to time to read it. That said, I am confident that capitalism is still the best economic system, one in which the market sets the price.