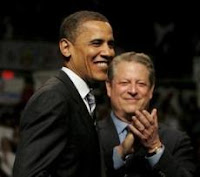 It is the duty of being a “pundit” to have an opinion on the events of the day and, of course, everyone has an opinion about President Obama’s State of the Union speech.

My most distinct impression while listening to it was that I had heard it all before.

It was a repeat of Obama’s 2008 campaign and a repeat of the past year’s failure to gain support for healthcare “reform” and the stalled “Cap-and-Tax” bill. It was a siren call to his fellow Democrats in Congress to continue supporting policies that will surely get them thrown out of office in October.

Some sage said that repeating the same thing over and over again, and expecting different results is a definition of insanity. I am no psychiatrist, but the narcissism that so defines Obama was on display. I kept count and he said “I” or some version of it at least 100 times in the course of the speech. He used the word “we” a lot, but that was a rhetorical “we”, not the one where we all pull together.

And we shall surely all pull together in November when we pull the lever in the voting machine for any candidate not on the Democrat Party line.

There is little to be added to the analysis of other pundits, but I did notice one particularly disturbing, albeit brief, reference to “climate change.” He wants the United States “to be a leader in the fight against climate change.”

If you recall, during the campaign Obama promised that, if elected, the seas would begin to recede. One of the more absurd claims of global warming was the massive melting of the North and South Poles, thus causing the oceans of the world to rise and swamp the coastlines of nations.

You may also recall that the President went to the Copenhagen UN Conference on Climate Change that happily resulted in nothing at all. This was a good outcome and it occurred in the wake of the release of emails between a handful of rogue climate scientists who had labored for years to distort the actual data on climate in order to further the vast global warming hoax.

The President actually said there was “overwhelming evidence” of climate change. No, but there is growing evidence that Al Gore and everyone else who said that global warming was occurring was lying or seriously misinformed.

How the President of the United States could continue to assert that global warming was or is real is beyond any rational explanation.

The President also repeated the falsehood that “investment”, i.e., taxpayer subsidies and “stimulus” cash, in “green jobs” and “clean energy” was the way out of the nation’s current economic difficulties. This is so absurd as to constitute willful deception.

About the only thing that made any sense was his passing reference to the need for more nuclear plants to generate electricity for the nation’s growing population and the need to open up exploration of the nation’s offshore reserves of oil and natural gas. The Institute for Energy Research projects that developing oil and gas reserves has the potential to create 1.2 million jobs and provide an additional $70 billion in annual wages.

Everywhere around the world, nations are cutting back on their investments in wind and solar power. It is inefficient and impractical. In a nation that has several hundred years of coal reserves, it makes sense to build some more coal-fired plants as well, given the fact that coal provides fifty percent of all the electricity we use daily.

Beyond the environmental and energy issues the President touched upon, his favorite theme was an attack on the nation’s banking and insurance industries. This no doubt derives from his Marxist outlook that sees any form of capitalism as wrong.

Finally, in an administration overflowing with former and future lobbyists, the hypocrisy of blaming them for the failure of a Congress that for decades has been mostly controlled by the Democrat Party is yet another absurdity. Lobbyists have been part of the nation’s political structure almost from the first session of Congress in 1789.

In sum, President Obama has learned virtually nothing from his first year in office. He will not be a “great one term President”, but he will be a one-term President in 2012.
Posted by Alan Caruba at 8:00 AM

When they start laughing at you . . . . . President Teleprompter is too political rhetoric what the Slap Chop guy is to TV pitchmen.

But even Obama couldn't keep a straight face when he delivered his "overwhelming scientific evidence on climate change" line and everybody laughed.

The Global Warming thingy is soooooooo over when the pitchmen can't keep the scam alive with a straight face. Obama's smirk says it all.

Oh, you noticed too that even the Democrats were laughing at him...when they weren't groaning.

I said it way back...the man is an over-educated idiot. Clueless. A narcisist.

And you are right...sell all your global warming and clean energy stocks...it's over!

That's all well and good but somewhere on the net I read today that that same Congress has passed another 1.some odd trillion dollar something or other. I think on Gateway Pundit.

And I refuse to watch the fool and his minions at any time. Cable has a lot of channels.History,Discovery,Military,Sy-Fy and more.All the premium channels such as Starz,HBO,Showtime and so forth.

Plus there is always the computer and the cell phone I am still trying to figure out.

Personally, I had a different take on 'the laughs'. The full quote in the video clip is: "I know that there are those who disagree with the overwhelming scientific evidence of climate change..." I took the laughs to be directed at us - "those who disagree..." It comes from an attitude of arrogance. That even though the truth is coming out, they are still going to try to impose their socialist/communistic control upon us. The current cap and trade bill may be on its death bed, but let us not forget that the EPA currently still has regulatory power over CO2 emissions (and our lives).

But, what I find rather interesting is that his statement, being that it is so vague, can apply to us as well. I firmly believe in the overwhelming scientific evidence of climate change! Except that the true scientific evidence I’ve seen points to a cooling climate and possibly some form of an ice age.

Steve, the climate is always in a state of change. I tell folks that the best definition of weather is "chaos" but weather is what is happening now while climate is measured in terms of centuries.

And you are right that we are in a definete cooling cycle and one which I am advised will last at least a decade or two.

My friend, Robert Felix, an expert on the topic has a site, www.iceagenow.com you might want to visit.

As to the laughter...my take is that it was cynical, a response to the obvious lie, if not outright stupidity, of what BO said.

This obamanation's ego will not allow him to accept mistakes. He just can't wake up to the fact that his policies are a failure.
The problem however, is that he's taking the whole country down with him.
I have "the audacity of despair".