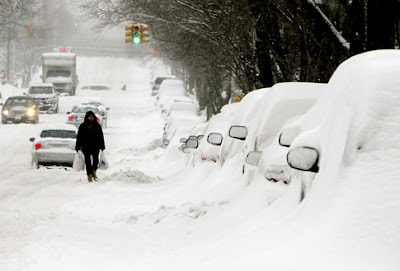 News you will NOT find in the mainstream press was posted March 2nd on Watt's Up With That, a blog that is an excellent source of climate news and views.

Steven Goddard reported "Now that we have reached the end of the meteorological winter (December-February,) Rutgers University Global Snow Lab numbers (1967-2010) show that the just completed decade (2001-2010) had the snowiest Northern Hemisphere winters on record."

"The just completed winter was also the second snowiest on record, exceeded only by 1978."

Among the facts the Global Snow Lab reported were that:

Average winter snow extent has increased since the 1990s, by nearly the area of Texas and California combined.

The third week of February, 2010 had the second highest weekly extent out of the 2,229 week record.

"It appears that anthropogenic global warming claims of the demise of snowfall have been exaggerated. And so far things are not looking very good for the climate model predictions of declining snowfall in the 21st century"

"Many regions of the Northern Hemisphere have seen record snowfall this winter, including Washington, D.C., Moscow, China, and Korea."

This is just further proof that the warmists, led by Al Gore, have been lying to us, not just for years, but for decades.

This is a very strong argument against the "cap-and-trade" legislation awaiting a vote in the Senate and the Environmental Protection Agency's threat to regulate carbon dioxide and other "greenhouse gases" on the grounds that they are causing global warming.

There is no global warming. Weather satellites confirm that the Earth has been in a cooling cycle since 1998.
Posted by Alan Caruba at 6:35 AM

Mr. Caruba; go to my youtube page and check out the snow videos.
Mike

I especially liked the story in the news today about all the ships trapped in the ice that "almost never gets this thick". How about if all you "warmers put THAT in your pipe and smoke it ....