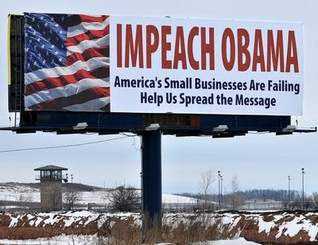 “Of all tyrannies, a tyranny sincerely exercised for the good of its victims may be the most oppressive. It would be better to live under robber barons than under omnipotent moral busybodies. The robber baron's cruelty may sometimes sleep, his cupidity may at some point be satiated; but those who torment us for our own good will torment us without end for they do so with the approval of their own conscience.”
-- C. S. Lewis (1898 - 1963)

Jeffrey T. Kuhner, president of the Edmund Burke Institute, a Washington, D.C. think tank, and a columnist at The Washington Times, might as well have rolled a grenade down the main aisle of the House of Representatives chamber. On March 19 he wrote a column titled, “Impeach the President?”

It is a bold proposal and would end much of the agony that President Obama has inflicted on Americans. In lesser developed nations a leader as unpopular as Obama would risk being seized by a mob and dragged through the streets before being hung.

Of course, we don’t do that kind of thing and, truth be told, impeachment proceedings have been rare in American history and both have failed.

Only two presidents have faced impeachment. One was Andrew Johnson who became president upon the assassination of Lincoln. Taking power in the wake of the Civil War, he was deemed to be too friendly to the defeated South. His removal from office in 1868 was defeated by a single vote.

The other president to be impeached was Bill Clinton in 1998. The charges brought against him included perjury, obstruction of justice, and malfeasance in office. He was no doubt guilty of all three, but the proceeding was initiated primarily as the result of the Monica Lewinsky scandal and a lawsuit brought by Paula Jones.

It was the considered judgment of the Senate that his failure to keep his penis in his pants did not rise to the punishment of losing his job. In hindsight, the senators might have been mindful that they would be installing Al Gore, the vice president, if they removed Clinton.

I cite this to demonstrate that impeaching Barack Obama—while probably the right thing to do—would be an impossibility in a Senate and House controlled by Democrats.

Not to go all legal on you, but Article II, Section 4 of the Constitution says, “The President, Vice President, and all civil Officers of the United States, shall be removed from Office on Impeachment for, and, Conviction of, Treason, Bribery, or other high Crimes and Misdemeanors.”

Constitutional lawyers deem “High Crimes and Misdemeanors” as acts of criminality in which a law was broken; abuses of power; and something called a “violation of public trust” as defined by Alexander Hamilton in the Federalist Papers. The definition of this is, for all intents and purposes, whatever the House of Representatives say it is. These are, after all, folks who can’t even kick Charlie Rangel out on his kiester.

The two acts of impeachment issued in the past cited exceeding the constitutional bounds of the powers of the office of president; behavior that is considered grossly incompatible with the function and purpose of the office; and using the power of the office for an improper purpose or for personal gain.

Being fellated in the Oval Office by a White House intern did not turn out to be sufficiently grossly incompatible in 1998. Clinton finished his second term, pardoned a lot of felons, and probably had to be restrained from leaving with the White House silver and chinaware.

Kuhner, however, made a very strong case for impeaching Obama. He accused the president of “imposing a leftist revolution” with the de facto nationalization of “key sectors of American life—the big banks, financial institutions, the automakers, large tracts of energy-rich land from Montana to New Mexico” were cited as examples.

The ugliness concerning the healthcare “reform” legislation and the proposed Cap-and-Trade legislation was cited as Obama’s willingness “to devour his presidency, his party’s congressional majority and—most disturbing—our democratic institutional safeguards to enact” both pieces of legislation.

“He is a reckless ideologue who is willing to sacrifice the country’s stability in pursuit of a socialist utopia.”

That is, in fact, what both Stalin did in Russia and Mao did in China. Both inflicted death in the millions and economic ruin on both societies.

The question, however, is whether the process of impeachment can be initiated and, once commenced, whether a case could be made to depose Obama. That is not likely to happen. It has nothing to do with whether a just case can be made, but because of the vast corruption of the political process and the moral decay Americans are witnessing in the Democrat Party.

We are now living in a state of constant crisis in America. That is precisely the way the White House likes it. Such conditions could lead to a complete seizure of power in the name of protecting the Republic.

I agree Obama cannot be Impeached at this time with Democratic majorities in Congress.

I doubt even if the Republicans capture the House in November he will be Impeached.

Of course, in my never humble opinion Obama should be Impeached by the House, removed by the Senate from the Oval Office and tried for treason by a federal court. If found guilty by the court sentenced to life in prison, or executed.

The man is a vile traitor and a psychopath bent on becoming dictator of the United SOCIALIST States of America.

I have long predicted, as have many others, such as John Voight, that Obama will start a civil war, as the majority of Americans will not accept such a development without armed resistance.

But what other option than civil war will Patriots have if Obama continues to rule by means of a lackey Congress and Presidential Orders that will quickly reduce the country to poverty, hunger, homelessness and anarchy?

It is said that people will accept the rule of a strong man rather the lawlessness of anarchy. I fear that in the end America may go the way of Chile in 1973 - Ruled by a military dictator and Obama killed in a palace coup.

The U.S. Armed Forces would never overthrow their Commander In Chief?

Even two years ago how many people would have predicted Obama would have gone this far in his apparent quest to murder our Republic?

God Save The United States.

Ronbo, a civil war presumes that some will take up arms to defend Obama and that strikes me as highly unlikely.

The military will not obey what they would regard as an unconstitutional or improper command. Police at all levels will protect citizens, not oppose them.
(Check out Oathkeepers.org)

I don't think that even the latest polls reveal the vast dissatisfaction and distrust Obama has engendered.

Time for him to pack his bags and go home to Kenya.

Alan, I agree that a civil war, as we would normally think of it, is highly unlikely. It seems to me that it would be far more likely to see some sort of "coup by default", rather than an actual uprising directed at the government or the President.

I suppose if Obama were to carry through with his plans to create his special militia, or attempt to forcibly disarm the public, things could change pretty quickly, but barring any really aggressive action toward the American people, I think calmer heads would normally prevail before things got out of hand.

However, I have a theory that if support for a President ever erodes to the point where the military and law enforcement institutions would be hesitant to follow his orders, then human nature dictates that the level of protection a President normally receives from those organizations would almost necessarily decline. Then, the chances of someone who intends to do harm slipping past them goes way up.

The agencies charged with protecting our Presidents are extremely professional people. They take their jobs very seriously, and they deserve our complete respect and admiration. However, people are people, and should those people ever reach a point where they lose respect for their commander-in-chief, at some point, honor and commitment could be trumped by human nature.

At that point, the question that presents itself becomes "what percentage of the people charged with protecting the President would be willing to take a bullet for a man they have no respect for, and may even secretly despise?"

If things ever reached that point, all bets would be off...

Thanks for your reasoned responses to my post, Alan and Guy.

Today is the DAY!

My heart wants to see Obamacare shot down in flames...

But my head thinks the math is with the Democrats...or should I say the corruptocrats of the Democommie Party?

"Rules?" A Democommie Congressman as good as said, "We don't need no stinking republican rules!"

In my naive belief in the inherent integrity of the Constitutional systems put in place by our founding fathers, and in the ongoing freedom that we've come to take for granted, I must admit that I never would've thought it could come to this. Yes, we've had some idiotic Democratic presidents in the past, but they all seem unbelievably benign compared to this monster that has taken over our country. How is it possible that a president has been elected that thinks that the sacred document our country has long held so dear is something to wipe his behind with? That in one fell swoop he can say "to hell with all the people and what they want?" And get away with this? Is he untouchable? He must be stopped! May God have mercy on our great country and intervene in miraculous ways to stop this before one single president can completely destroy this country in one term...

I have an argument (I think compelling) for leaving well-enough alone, and it can be summed up in the following potential announcement, "Mr. Secretary, Members of Congress, may I introduce the new President of these United States, Mr. Joseph Biden!"...

Even more frightening would be to substitute "Ms. Nancy Pelosi" for Biden... I shiver to think of such horrors...

Biden may be stupid, but he is not dangerous. He is just your weird uncle type.

He has no real self confidence, that is why he plays the joker all the time. Just another weird Gaffe Master.........He will bounce off the first strong opinion he faces that states obvious facts. He doesn't do facts. He is easy to face down. Probably easy to stare down.

He is not dangerous, but Obama is.
I think we all can see that by now.

This is a truly dangerous man and he should be removed at the earliest possible opportunity.

Nancy Pelosi is as bad as Obama, so the SS would need lock Biden away in a vault where he can be weird Uncle Joe until dis-elcted.