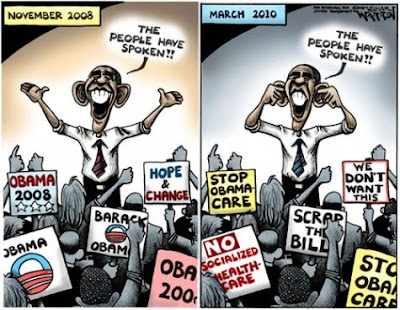 If Barack Obama had been engaged in an ordinary job interview on Wednesday evening, he would not have been hired. Any experienced interviewer would have instantly picked up on his avoidance of straight answers and body language that revealed deceptive behavior.

During the course of his interview with Fox News reporter and anchor, Brett Baier, the President did more damage to himself and to his alleged health care "reform" than in the entire period of time leading up to now.

Inaugurated in January 2009, Obama has largely ignored the financial crisis he inherited from the very end of George W. Bush’s last term. After an “apology tour” and media blitz lasting several months, most of his energy has been devoted to taking over the nation’s healthcare system.

Early on he paused to throw billions at the failed General Motors and Chrysler. He made the American people their owners instead of letting an ordinary bankruptcy proceeding restructure the companies. At the same time, his Secretary of the Treasury continued his predecessor’s policy of parceling out billions in bailouts to the very Wall Street firms that had caused the financial meltdown.

While that was occurring, the Chairman of the Federal Reserve (an independent central bank, not really part of the federal government) was busy running the printing presses night and day to create fiat money.

During his first year, as millions of Americans found themselves unemployed, instead of concentrating on measures that would jump-start economic growth such as tax cuts and other incentives, Obama’s sole domestic policy concern was healthcare “reform.”

Desperate to get a vote on it, despite Democrat majorities in both the Senate and the House, Obama turned finally to Fox News in yet another effort to make his case. What he did not anticipate was the relentless questioning of a reporter who wanted real answers about the ugly process by which the Senate and House bills have reached this point.

The President’s body language said as much as his efforts to filibuster his answers to Baier. The obvious effort was to run out the clock and end the hammering he took.

His hands were always gesticulating a plea that Baier stop asking why the bill was filled with horrendous provisions such as the “Louisiana purchase” or the gift of a $100 million hospital in Connecticut.

What Obama wanted to do was repeat his stale talking points for the Fox audience of viewers, stressing his attack on insurance company’s profits. Those profits, however, are a mere 6% at most, far less than other industries. For both the insurance companies and consumers, the lack of free market competition is the real problem.

Following the interview, Fox commentator Charles Krauthammer called Obama’s answers “a very clever rope-a-dope”, noting that “He did not have a lot of answers.” His colleague, commentator Steve Hayes, called the president “simply dishonest."

Anyone watching and listening would have come to the same conclusion.

The interview showed a man who discovered that the sheer power of the office of president and the automatic respect it engenders was not enough to protect him from an intense and long overdue grilling.

The particulars of a plan—-which he refused to discuss—-would dramatically change the relationship of every American to their physician and the ability of their physician to prescribe the procedures necessary to overcome an illness or injury.

To casually explain a vote on Obamacare as “the right thing to do” looked and sounded lame.

The vast majority of Americans of all political persuasions want this bill killed. Obama is spectacularly indifferent to public opinion.

Even Fox commentator, Juan Williams, a liberal voice, noted that the failure to get his healthcare “reform” bill passed would leave Obama “mortally damaged” as the leader of the Democrat Party and as president in general.

The simple fact is that, from the day he entered the office, Obama has damaged his credibility and confidence in his judgment. In just over a year he has gone from polling around 70% approval of his performance in office to the mid-40% percentile and it just keeps getting worse.

The interview may, indeed, turn out to be a turning point because, if I was a member of the House of Representatives, a Democrat, and up for reelection in November, I would conclude that this president was not worth following off the cliff.

Thank you Mr. Caruba for another noteworthy post on Obamacare.
After I read your post I saw the segment on FoxNews.com. I must admit I was so frustrated with the president's answers I couldn't even watch the whole interview.
Obama looked foolish and desperate. I also couldn't get past the arrogance and "I know what's right for you" attitude.
I feel, as you do, that this is 'dead man walking'.
Even if they pass this law, it will haunt the Democrats for years in elections.
I also think the good folks defending the constitution are fighting the good fight and will prevail by shredding this bill bit-by-bit, eventually ending up in a full repeal.
The residual side-effect will be making Americans more wary of Government control and Marxist agendas.
Be brave Americans.
We *WILL* win this fight!!

Thank you again,
Your fan,
-Tim

You hit the nail on the head once again, Alan, so I give you first place on my blog this morning.

BTW, I didn't know there was an earthquake in Hawaii. Do you have any information on that event?

Thank you. Looks great on your site. As for Hawaii, I heard about the quake, but it apparently wasn't a big one. The whole Pacific ring is bumping and jumping. Watch for a big volcano eruption at some point.

Thanks Alan for allowing me the privilege of posting your articles on my blog where they do get much attention.

Excellent point and something I've wondered about for the last couple of years - Obama doesn't seem very intelligent away from his teleprompter.

Hence, I am of the opinion that his I.Q. is no more than about average, perhaps even lower.

This is very likely one reason why his academic records are sealed.

We do know that both his books were written by others and long time commie pal, Bill Ayers, has admitted authorship of the first one.

I predict one day soon all will be known about Obama. When this glorious day arrives, I hope posted here first by Alan, what public respect Obama has now will end, as was the case with Bill Clinton when his sorry affairs were exposed by Matt Drudge in 1998.

Why is it so hard to get this worked out? Some people want private insurance. Some want Medicare.

Why not give people what they want? Why give us this nonsense? Why are we being forced to increase the profits of the private health insurance industry? We will be forced to buy private insurance or the IRS will come after us.

If you like paying your portion of the extra $156 billion dollars towards executive salaries (that is 6% profit margin on a $2.3 trillion industry) then you can. If you want to pay the lower government cost, you can.

Obama is just another politician. He is merely doing his part in the silent take over of our country that has been going on for decades now. We are already an Oligarchy, headed towards a Mussolini type Fascism...the merger of State and Corporate interests.

And remember, the Federal Reserve is not Federal and it has NO reserves.

"...if I was a member of the House of Representatives, a Democrat, and up for reelection in November, I would conclude that this president was not worth following off the cliff."

That's assuming they are smarter than he is, which, from what we've seen to date, is a bit of a stretch. Still, one can hope. After all, isn't that what O'Bunko is all about, hope and change? So, I sure do hope he goes, and that the change is an improvement.

Well, it would seem that there are indeed enough Congresspeople stupid (or gullible) enough to follow NoBama right off that healthcare "reform" cliff... I pray that the Supreme Court exercises its review powers expeditiously...