Look On the Bright Side 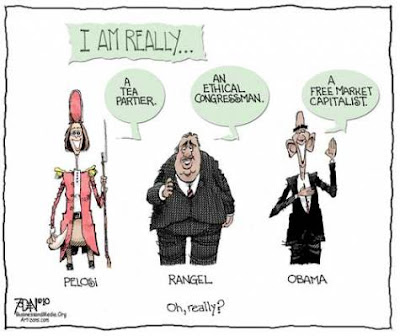 I was over at the Rasmussen Reports website and was struck by the way President Barack Obama’s approval ratings continue to decline. It’s not like I and most conservatives have not been aware of his rocketing unpopularity of late, but in trying to remember the last time I saw numbers like this it was during Jimmy Carter’s presidency.

While both Bush’s, father and son, ran into a loss of popularity due to the decisions and directions they took the nation, few people felt a visceral sense of dislike for either #41 or #43. There is no small irony in the renewed popularity of #43 in the form of “Miss Me Yet?” billboards and a small industry of items devoted to the thought.

So, when I received a forwarded message, “Look on the bright side”, from one of my friends, it all came together for me. Unfortunately, the author of the text is unknown, but I hope he won’t mind if I share his thoughts about Barack Hussein Obama with you.

“He destroyed the Clinton political machine. Driving a stake through the heart of Hillary’s presidential aspirations; something no Republican was ever able to do. Remember when a Hillary presidency scared the daylights out of you?”

“He killed off the Kennedy dynasty. No more Kennedy’s trolling Washington looking for booze and women wanting rides home. American women and freedom are safer tonight!”

To which let’s add the governorships of Virginia and New Jersey—now Republican. And, of course, the new Republican Senator from Massachusetts. Obama personally campaigned for their opponents.

Rep. Charles Rangel whose accumulated misdeeds now represent a political career that is all over but for the final curtain and another New York Representative, Rep. Eric Massa, is caught up in a nasty sexual harassment scandal.

All Democrats. All from the party that cried “culture of corruption” throughout the Bush years.

“He has completely exposed liberals and progressives for what they are.
Every generation seems to need to relearn the lesson on why they should never put liberals in charge. Obama is bringing home the lesson very well!

Liberals tax, borrow and spend.
Liberals won’t bring themselves to protect America.
Liberals want to take over the economy.
Liberals think they know what is best for everyone.
Liberals aren’t happy until they are running YOUR life.”

“He has brought more Americans back to conservatism than anyone since Reagan.”

“When the American People wake up, no smooth talking TelePrompter reader can fool them!"

We don’t need polls to tell us what our family, friends, and co-workers think. The most common thing I hear from among my Democrat friends is regret for having voted for Obama.

There’s nothing like a raging Recession or incipient Depression to get people’s minds focused on reality.

There’s nothing like President Obama’s naked repudiation of the will of the people regarding healthcare “reform” to get Americans into the streets protesting.

If you’re the President, Speaker of the House, or Senate Majority Leader, there’s nothing like a daily recitation of lies, lies, and more lies to drive your poll numbers into the toilet.

Come November, if the American people replace as many Democrat incumbents as possible, there will indeed be reason to look on the bright side.

It is beginning to look like Obama is the best thing to happen to the Republican Party, conservatives, capitalists, Objectivists and patriots in a generation.

I predict that when America is finally rid of this little beta male as president, the taste of socialism will be so bitter in the mouths of the majority of Americans that it may spell death for the cult of Karl Marx.

Life is strange. Sometimes what you think is bad turns out to be
good and vice versa.

Ronbo, for your sake, my sake, my family's sake, and the sake of the American people, I hope you're right ....

Guy - Like I told a friend of mine in Britain, where the socialists have ran wild for many years, it is always darkest before the dawn.