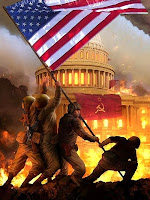 This is a government unlike anything those of us who have been around a long time and have long memories has ever seen.

You may recall that when the Bush administration tried to foist yet another amnesty for illegal aliens, Americans came out in full force to ultimately defeat the bill. When Bush tried to pass legislation to reform Social Security he threw in the towel when it became evident that no one wanted it.

Not so today. Despite the polls that demonstrate that the vast majority of Americans are opposed to Obamacare and despite the protests taking place in Washington, D.C., as well as an avalanche of calls, emails, and faxes to members of Congress (Republicans are exempt as they stand united against it), the Obama administration and his fascist supporters in Congress are determined to pass or send something to the President for his signature.

History is replete with presidents who stumped for legislation that Americans opposed. Have we forgotten Clinton’s effort to pass healthcare “reform”? Woodrow Wilson’s failed campaign to get the U.S. to join the League of Nations comes to mind. I could cite other examples, but the point is that, when the People speak, presidents in the past have listened.

The People be damned!

I am no constitutional expert, but I am pretty sure that Obamacare is unconstitutional in many respects, not the least its provision that authorizes the government to force you to buy insurance you don’t want.

What we are witnessing, however, is something contrary to the way the nation has been governed in the past. We are suffering through the worst abuse of power we have ever witnessed in the modern era.

It took a Civil War to end the movement to succession and it is going to take something short of a new Revolution to stop this President and this Democrat controlled Congress from forcing upon Americans a socialist effort to expand the government by incorporating within its control, the nation’s healthcare system.

Elements of that Revolution can be seen in the emergence of the Tea Party movement. It can be seen in the Oathkeepers movement in which members of the nation’s police forces and others have committed to refuse to enforce unconstitutional laws or power grabs such as a specious declaration of martial law.

What strikes some of us as astonishing is the deliberate ignorance of the President concerning the Constitution. For a man who taught courses on the subject at the University of Chicago, he seems utterly clueless about its limitation and restrictions.

It is more likely that he regards the Constitution as an impediment to the socialist reformation of our government.

The one thing the Founders feared most was the establishment of a monarchy or dictatorship in America. They lived in an era of the “divine right of kings” and saw the French Revolution turn bloody, resulting in the takeover by Napoleon who later crowned himself an emperor.

When George Washington was offered the monarchy by some, he spurned it and after two terms in office stepped aside for a transition of power. When King George III heard that Washington would return to his farm, he declared, “If he does that, he will be the greatest man on earth!”

Is it any wonder then that a growing number of States are distancing themselves from the central government, passing legislation intended to protect their citizens from the imposition of Obamacare if it is “passed” by Congress?

The Obama administration is hell-bent to wear down Americans, to pass Obamacare by any means possible including outright bribery. What Obama has actually managed to do is turn the majority of Americans against him and to set in motion a massive shift in the political control of the government when the midterm elections are held in November.

Whatever the outcome of Obamacare, the President and the Democrats have lost.

Well worded and it going to be one hot summer and I speak not of the weather when I state that.

Thank you, Christopher. It's also a lead commentary today over at CanadaFreePress.com that shares my posts with visitors to their site every day.

Regarding ObamaCare: ANY, let me repeat that, ANY form of this bill passing WILL result in an outright BLOOD BATH, figuratively, at the polls, and possibly, quite literally, in the streets...

I am NOT advocating violent civil insurrection against the elected government of this nation, but there are those that are, and I am not going to rule out joining them either...

What the hell will we have left to lose??

Fred: I doubt it will lead to street riots, but it will surely be one come Election Day in November.

The bill itself will be challenged in the courts and resisted by the States (it imposes a huge financial burden on them at a time when most are broke.)

One can only wonder what Obama's last three years in office will be like. I hope they are sheer hell for the man.

I hope you're right about Obama and his Democommies being stopped short of civil war.

I have to know Alan (since you censored my last post concerning this) why you think the president/s have been to blame?
Do you not believe that the international financiers are the puppet masters?
Our government is like the WWF - one big act with both parties serving one master.
Excellent blog nonetheless, I check it daily and spread it like buttah.

Herman: Everything that happens is not just one great conspiracy. It's more like one great quest for power and riches by everyone everywhere.

Hopeandchange ™ sounded pretty and all, but it was really about fundamental change of our entire Country and the principles upon which it was founded. Once socialized medicine is in place, the fundamental change will occur.
Yes. Because government health care is not about health care, it's about government. Once you look at it that way, what the Dems are doing makes perfect sense. For them. Remember...babysteps. HC is a hurdle.

You wrote, "It is more likely that he regards the Constitution as an impediment to the socialist reformation of our government."

This really is not a secret as Obama has publicly stated that he sees the constitution as a list of negatives which should be changed; changed so that government will be unrestricted.

This will be a very interesting week - If, as it appears now, the Democommie Congress passes Obamacare, or Obama does an end run around the Constitution and enacts Obamacare by Presidential Orders, which we all know is about the seizure of one-sixth of the economy and a de facto socialist coup overthrowing the Republic, the fuse leading to civil war will be burning.

Of course, the opposition plan is to throw the Democommies out in November. It's a noble idea, but I don't think it's going to work for a number of reasons, the main one being Obama will simply veto any repeal for his legislation and rule by decree.

At some point in the coming year Obama will attempt to shut down the opposition media and declare a national emergency. So I see violence in the cards perhaps as early as next year, very likely started by a General Strike by the opposition.

It would appear that by fighting totalitarianism for decades all over the world, the USA has been infected with the same disease, like a heroic doctor who saves patient after patient only to become ill with the same sickness.

I posted this article on my blog with the link back to you.