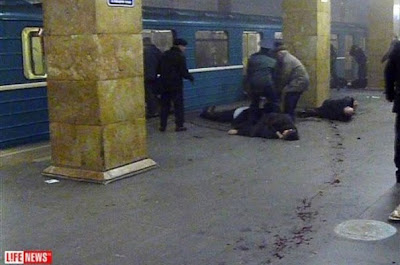 I keep wondering when the world is going to begin to take Islamic terrorism seriously.

The world’s leaders and, in particular, the media could begin by calling it “Islamic” or “Muslim” terrorism. The media were, of course, thrilled to discover that America had a small band of homegrown nut cases, a Christian militia arrested before they did some serious harm. That’s the kind of thing that happens when the president and the government begins to be regarded as the anti-Christ.

I liked Vladimir Putin’s response to the Moscow bombings. He said of those responsible, “We will destroy them.”

The suicide bombers in Moscow will no doubt be identified—there was video of their entering the station—and an efficient national security apparatus will find out who they are, who their family is, who their friends are, and invite them in for some interrogation. They are not likely to be read Miranda rights, nor will their lawyers be present.

The reason for this is that they are potentially all terrorists.

America has been devoted to treating the terrorists we captured on the battlefields of Afghanistan and Iraq as humanely as possible. Those incarcerated at Guantanamo were given copies of the Koran, their dietary laws were observed, ACLU and other lawyers were permitted access to advise them of their “rights.” Under the Geneva Convention, however, they are exempt from the rules of war and have no rights as combatants.

The Attorney General of the United States of America, a former resident of La-La Land, didn’t think it was the least bit odd to suggest trying Khalid Sheik Muhammad, the 9/11 mastermind, in a civil court in the heart of New York City.

Any number of the Gitmo detainees have been returned to their homelands and have since turned up on the battlefield again. This suggests we do not take terrorists seriously. These are, after all, people who cut the heads off of other people.

Meanwhile, the Department of Homeland Security has an odd notion of who poses a threat to the nation. They identified “right-wing extremists” as their primary concern, particularly those who express concern about the central government’s expansion, opponents of abortion, opponents of illegal immigration, and “disgruntled” veterans returning from the battlefront. No mention of left-wing extremists.

The first rule of war is “know your enemy.” In the space of a decade, they have shown up in New York, London, Madrid, Bali, Mumbai, and in Moscow; all killing civilians indiscriminately on buses, on trains, in subways, in skyscrapers, and at resorts. Before that, they devoted themselves to kidnapping Americans in Lebanon and blowing up two of our embassies in Africa.

From the streets of Paris where Muslims rioted at will to Malmo, Sweden where attacks on local Jews are driving them to leave the country, the story is always the same. Wherever Muslims become a sufficient number of the population, they begin to make demands, harass the locals, and in the Netherlands to murder an outspoken opponent of Islam in broad daylight. The Dutch response has been to put on trial a man who is warning of these dangers.

The British cannot accommodate them enough, while the French have decided it is far better to be French than Muslim, passing several laws to protect their cultural traditions and society.

The impact on Americans has mostly been to turn a trip to the airport into a complete nightmare, but few other restrictions have interfered with their normal activities. Despite valiant efforts by our border patrol, our southern border goes largely unprotected. The insane murder rate from the drug wars in Mexico will arrive any day now in the U.S.A.

The small U.S. Muslim population has been free of harassment, but the organizations claiming to speak for them have all been identified as having links to the Muslim Brotherhood and related jihadist organizations.

Who takes the jihadists, the terrorists seriously? Saudi Arabia where they just rounded up a large ring of al Qaeda conspirators, Pakistan where they have finally begun to hammer the jihadis in Waziristan and other frontier provinces, and just about every nation with a Muslim majority.

The official and rather perfunctory response to the Fort Hood shootings and the “underwear bomber” on Christmas suggests that our government has forgotten the message that arrived on September 11, 2001 or has decided that “right-wing extremists” are the real problem.

That’s unfortunate because the terrorists have an agenda of their own and, unless the global effort is made to find them and kill them, the attacks will be as common as movie listings in the daily newspaper. Or should I say obituaries?

In Cairo, in 2009, President Obama said, “You might say the United States is a Muslim nation.” Some might call this seriously mistaken and some might say it is wishful thinking.

Islamic terrorism remains the great concern of most Americans who probably need to be more watchful of their Muslim neighbors and co-workers. That would have gone a long way toward saving the lives of the Fort Hood victims.

Alan,
I read this on Texas Fred and want to let you know that it is excellent. I have cross posted this tot my site with links back to
your site. Every word is true.

Thank you for a great article!

The more we share the word on these issues, the closer we get to solving them.

A dozen or so years ago a group of Egyptian medical students hijacked a bus of Western Tourists and killed them. What is not well publicised is that they raped and tortured them before murdering them. This was done in protest to the Egyptian government not adopting Sharia law.

The response of the government was to execute them and to take away the wealth, posessions and employment of all their relatives. Harsh punishment for those not involved but it was a very powerful message.

I didn't think I would ever agree with the former U.S.S.R. on anything. Well I was mistaken,(not wrong mind ya!).
Sounds like they are gonna go Judge Roy Bean on them..GOOD!!!!!
We need a few hangin' judges here.

Alan,
Absolutely my pleasure and
have added you to blogroll
at Patriot's Corner.

The more, the better and faster
when can get the words out that
must be heard to save our
country.

The book, "The Politically Incorrect Guide to the Middle East"
by Martin Sieff is really worth the read.

I wonder how long it will be before we have to think twice about going to the mall or stopping for a coffee here in America. I'd like to think it won't come to that here, but everything I see happening around me tells me that those days aren't far away....

THANK YOU for posting this! I love your blog!!

Common Cents does an excellent job as a news aggregator, but there are many such blogs and Warning Signs provides links primarily to those that offer opinions and insight to specific topics.

“We will destroy them.”

Putin has the right attitude on this. He understands that Islam and Russian civilization are incompatible.

I can't imagine that BHO will really support him.