Being a Politician While Black 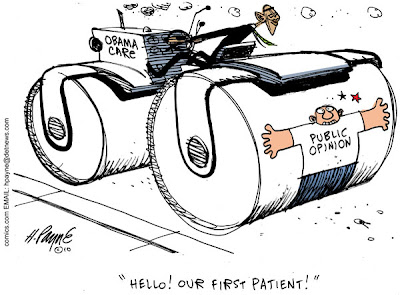 Privately I have been telling friends that Barack Obama has made it nearly impossible for any black American politician to become president for at least the next two generations, maybe more. He has sealed their fate.

Then I read Walter E. Williams’ column, “Can Black Americans Afford Obama?” He wrote, “I am all too fearful that a future black presidential candidate will find himself carrying the heavy baggage of a failed black president.” Williams is a distinguished black economist and a syndicated columnist who sometimes sits in for Rush Limbaugh.

Thank you, Walter, for saying what I have been thinking for a very long time. Just how much irony is there that both Carter and Obama are so liberal that they estranged voters so swiftly and so deeply while in office they have become the standard for failure against which others will be measured.

Political failure is neither white, nor black. It’s just failure.

Having forced “Obamacare” on America, the President is so tone deaf he thinks, despite having signed it into law, that he must go out and “sell” it again. Somewhere close to two-third of all Americans want it repealed!

The comparison to Carter is accurate. The 1979 Iranian revolution and Carter’s inability to secure the release of U.S. diplomats held hostage sealed his fate. Fast forward to Iranian president, Mahmoud Ahmadinejad, who literally mocked the latest UN sanctions that took the U.S. sixteen months to fashion and secure.

The Iranians continue to use Obama as a doormat and he continues to think that diplomacy will achieve anything with these fanatical Islamists.

White people have long been accustomed to keeping their opinions to themselves about blacks and for very good reason; the history in America for blacks was one of slavery and the subsequent Jim Crow laws, the KKK, school segregation and violations of their humanity until the passage of the Civil Rights Act in 1964.

Following the Civil War, the 15th Amendment to the Constitution stated that “The right of citizens of the United States to vote shall not be denied or abridged by the United States or by any State on account of race, color or previous condition of servitude. It was passed on February 3, 1870. It took nearly one hundred years before blacks had any real chance of enjoying the American dream.

Forgotten in this history, however, is that a lot of white people also fought very hard to correct the wrongs that had become institutionalized in American society. Barack Obama would not be president if a lot of white people hadn’t voted for him. I think they saw an opportunity to say to the world, see, we’ve changed.

Williams wrote “Early indications suggest that the Barack Obama presidency might turn out to be similar to the failed presidency of Jimmy Carter. That’s bad news for the nation but, especially bad news for black Americans.”

It is, indeed. It’s especially bad news for black Americans running for public office. I am not talking about those from heavily black districts, but those who must compete for white votes. One, Alan West, is a black candidate for Congress in South Florida. He is an articulate and outspoken conservative. He transcends color. He’s about real leadership, real ideas, and real change.

Any member of a minority will tell you that they cringe when “one of theirs” screws up because, in the end, it makes them all look bad. Barack Obama is not doing black Americans any favors these days.

Unfortunately, the vast majority of African-Americans have sold their souls to the socialist Democratic Party. I don't think most white Americans care what race a candidate belongs, but they do insist that the candidate obey the U.S. Constitution and not "Kas Kapital."

Do yall remember Ken Hamblin?? Talk Radio show host. In the 80's, he said on air, (not a direct quote), ..No city, state or nation can survive under a liberal black. Example, Atlanta, Houston.
He predicted that America would probably have a black president around the turn of the century or just after. Why? Because of the liberalization of the Nation. Not bad for a Black, Vegetarian huh?
...man I miss him on the radio...

I don't think of Obama as white or black....He's a red all the way through.