Do What Obama Tells You to Do 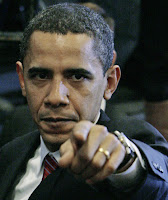 I found this on another blog. It is about an Obama executive order that intends to create a council that will engage in "lifestyle modification."


White House Chief of Staff Rahm Emanuel is fond of saying, “You don’t ever want a crisis to go to waste; it’s an opportunity to do important things that you would otherwise avoid.” Well, the Obama Administration certainly has not let the British Petroleum (BP) Deepwater Horizon oil rig crisis go to waste, using it as a smokescreen to silently assault and further diminish American citizens’ personal freedom.

While the nation has its eyes and ears focused on the blame game ping-pong match between President Obama and BP top brass, President Obama on Thursday, June 10, quietly announced a new Executive Order establishing the “National Prevention, Health Promotion, and Public Health Council.”


You will "change" to my liking!
Claiming the “authority vested in me as President by the Constitution and the laws of the United States of America,” President Obama has truly gone off the deep end this time in his most atrocious attempt to date to control every aspect of Americans’ lives.

According to Sec. 5. of the Executive Order that details the President’s “National Prevention and Health Promotion Strategy,” the Council will be charged with carrying out “lifestyle behavior modification” among American citizens that do not exhibit “healthy behavior.”

Making matters even worse, if that is even possible at this point, President Obama will create an “Advisory Group” composed of experts hand-picked from the public health field and various other areas of expertise “outside the Federal Government.”

Let’s consider who the President has sought advice and mentoring from in the past:

Rev. Jeremiah Wright, who the Anti-Defamation League calls a “Messenger of Intolerance,” and Bill Ayers, leader of the 1960′s domestic terrorist group ”Weatherman” that was “responsible for 30 bombings aimed at destroying the defense and security infrastructures of the U.S.”

Now, President Obama is going to seek medical advisors who will be charged with modifying lifestyles and behaviors of those citizens he deems unhealthy? “Paging Dr. Kevorkian! You’re wanted in the White House STAT by President Obama!”

Whether you are a child, a parent, a worker, or retired, the President’s approximately 25-member “Advisory Group” will soon be present in every aspect of Americans’ lives, as the Executive Order prescribes. Specifically, our new so-called lifestyle behavior modification advisors will be actively carrying out the President’s orders in:

The President’s Executive Order is a blatant and forceful attempt to adjust the way Americans young and old think, behave, eat, drink and whatever else free will used to entitle our nation’s citizens to enjoy as prescribed by the Founding Fathers.

If you are feeling stressed-out, sad, confused, hungry, thirsty, bored, or tired, do you honestly trust President Obama and his “Advisory Group” to act in your best interests?

Editor's Note: I was asked for the source of this story. It's from the White House website.

http://www.whitehouse.gov/the-press-office/executive-order-establishing-national-prevention-health-promotion-and-public-health
Posted by Alan Caruba at 7:19 AM

While I believe that Obama is one of the most incompetent and socialistic and damaging presidents we've ever had, I fail to make the leap from an effort to encourage a healthy life style with "Do as I say" etc. Enough of this, I need to go and work out. Today I focus on Legs, Back and abs...

You mean they're not gonna let me buy Twinkies with my Foodstamp card? Quelle bummer!

I spent too many years around Miami Beach to have a lot of faith in "Trust me!" A somewhat different meaning, there. :-)

Isn't there enough interference with the way Americans live their lives as it is? While good health and exercise are important goals, it seems to me that having the President try to "enforce" behavior modification is just another way of creating an army of robots trained to think the way he does.

If I want a pizza, or Twinkies, that's my problem. I don't need a nanny state to come tell me I can't have them.

The "advisory groups" have infected the UN and most of europe. They will be left leaning like minded useful idiots like BO. God help us all.

This is very much in line with a national health care program. To put it simply, under the "used to be" health care system in the US, doctors in the US were quite pleased to see patients. The patients represented profits (and yes, physicians' practices have been relatively small businesses, and physicians have had to be concerned with profits. I know, as my grandfather was a GP with his own practice.) Either paying patients, in consultation with their doctors, or health "insurance" companies have had to balance the level of medical services with cost.

For anyone who wants to comprehend what is going on, I highly recommend the book The Road to Serfdom, Friedrich von Hayek, 1944. An illustrated synopsis of this book can be had at: http://mises.org/books/trts/

And this is certainly is a "do as I say or else" approach.

A friend of mine wrote:

He eats caviar that is high in cholesteral and salt.

He loves Kobe beef that is very high in fat content.

He is a boozer and been told to cut back on his drinking.

He does play golf and shoots hoops, but can cut brush and chop wood? We know baseball is not his thing because he pitches worse then Charlie Brown.

He has a past history of drug abuse, using things like cocaine.

Many mental health professionals think he is nuts.

It is awful to watch Yuri Bezmenov's words in action as he laid out the KGB strategy to demoralize a country, so much so that people would and could not react properly to factual information. Yuri explained all this back in 1984, it's like being trapped in a horror movie to watch this all play out right in front of my eyes in 2010.

Our country is being destroyed, yet we are powerless to act much less organize to prevent this from happening.

"I fail to make the leap from an effort to encourage a healthy life style with "Do as I say" etc."

Quite simply, it's outside the scope of the Presidents Constitutional authority.

Beyond that, it creates one more agency without congressional oversight, responsible to no one but the President.

Do you suppose your medical care could someday be affected by your compliance or non-compliance with the "lifestyle behavior modification" suggestions of this advisory group? For example, if you refuse to lose weight, will you be denied coverage for related problems such as diabetes?

More of the same from our federal government, eh?

We already have the most prisoners in jail than any other country on the planet.

To modify the behavior of people...mostly for smoking marijuana...some for using other drugs...a few that sell drugs...

Obviously, we need jails for violent people, but we mostly have people in prison because the federal and state governments want to modify their behaviour.

This is just more of the same...

Ron, I hate to tell you, but the discrimination and penalties for "lifestyle" issues are already happening. Just ask anyone who has lost their job or been forced out of a company for being a tobacco user. My wife was denied disability coverage by her employer's provider because, according to them, she's overweight....

Smoking, weight and diet are already under attack, and alcohol use is coming next. Sadly, this clampdown on our "behaviors" will have the exact opposite effect. I know many people who are lying to their health care providers rather than admit that they use tobacco or alcohol. Once your admission of these behaviors becomes part of your medical records, and finds its way into the national medical database, you'll be labeled for life, and it will take an act of God to escape it.

I brought this point up with dozens of people when smoking was under assault here in Ohio, but most of them were so hell-bent on crushing the rights of smokers that they failed to see the implications. I can't wait to hear their whining when they are targeted for their weight or their other behaviors. I'll probably have to side with them on principle, but it certainly won't be easy ....