Democrats Attack the First Amendment with the Disclose Act 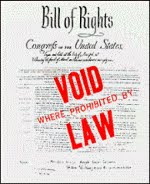 House Speaker Nancy Pelosi has lately taken to saying that the failure to pass the Cap-and-Trade Act would be “immoral.”

I suggest that the White House and the Democrat congressional leadership and members haven’t a clue when it comes to determining the morality of anything. They are so politically corrupt that they are oblivious to what everyone sees in their behavior. Only such people could pass the Healthcare Act in the face of massive opposition by the American people.

Only Speaker Pelosi could actually say that it was okay to pass the bill first and then find out what it contained. This is so utterly contemptuous of the American people that I cannot think offhand of anything comparable. No, wait, the so-called Stimulus Act, more than a thousand pages of pure political pork, was comparable.

As this is written, the Associated Press is reporting that “Sales of new homes collapsed in May, sinking 33 percent to the lowest level on record as potential buyers stopped shopping for homes once they could no longer receive government tax credits.” Unemployment officially remains around 9.7%, but the reality is more likely closer to 12% or 14%.

Given the personalities involved, the moral rot in the White House arrived with the President and metastasized as he added an entire layer of “advisors”, quickly dubbed “czars”, to the official stooges he had selected as the Secretaries of various departments. Even to the casual observer it was obvious that they were mostly academics, people with no experience relative to the nation’s economic realities.

Those realities had included a financial crisis that had been set in motion by the government’s increasing intrusion into the home mortgage market. At no time since, however, has there been any notice taken of Fannie Mae and Freddie Mac except to seize them in order to staunch some of the financial bleeding.

On Thursday, June 24, the “Disclose Act” (H.R. 5175) is likely to be voted upon despite the fact that it is manifestly unconstitutional on its face. Its purpose is to undo the Supreme Court’s decision in January, Citizens United v. Federal Election Commission, that made it clear that corporations, unions, and non-profits like the Tea Party groups, free market advocates, and conservative groups are free to use their funds to express themselves in the run-up to the November elections.

The intent is to saddle groups likely to oppose Democrat Party candidates and issues with so much paperwork that it in effect silences them and deprives them of their First Amendment rights.

In the same fashion that votes were bought for the passage of the Healthcare Act, groups like the National Rifle Association were offered exemption from the Disclose Act in exchange for not opposing it. Bruce Josten, executive vice president of the U.S. Chamber of Commerce, said, “There are 100,000…organizations who as a result of that negotiation hve just been tossed overboard and silence.”

The Disclose Act is unconstitutional, immoral, and testimony to the corruption of the Capitol Hill Democrat politicians setting the national agenda while selling out Americans in their quest to stay in power.

So, why doesn't the NRA do an "Obama" .... allow them to write the law with the exemption, and then when the debate begins, come out in full opposition to it?

I see no reason why they couldn't. The same applies for all the others who are being offered exemptions....

It's time to start playing the game no-holds-barred. Lies and deceit are standard practice for the Obama administration. We need to give them a little taste of their own medicine. The end justifies the means ...