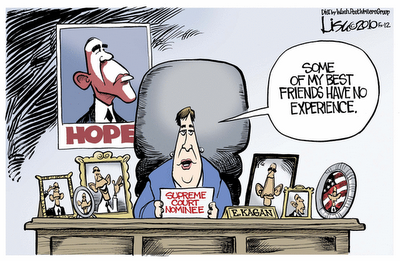 I would be more depressed regarding the nomination of Elena Kagan to be a Supreme Court Justice were it not for George W. Bush’s nomination of Harriet Myers. That caused such a firestorm of rebuke that she withdrew herself from consideration. The same should be done for the ideologue that Obama has nominated, but it won’t.

Kagan, like Obama, salivates over having the power to change the history of the nation, tilting it toward the same failed socialism that collapsed the former Soviet Union, has been abandoned by the People’s Republic of China, and has brought a number of European nations to the doorstep of bankruptcy and default. No matter what form or modification of socialism has been tried, it has failed.

Watching the dumpy Ms. Kagan lie through her teeth saying her personal politics won’t influence her decisions is nauseating. Her rise through the ranks of academia and public service has all been due to how she politically positioned herself through life to get to this point.

It is a confluence of events and personalities such as history always throws up—-usually at the worst possible time.

America was blessed by some of the finest minds of their time when the Founders gathered in Philadelphia to write a Constitution. We were blessed by men of determination and vision like Lincoln and Reagan as just the right time in our history. In between those times, the tendency was to fall back into bad habits of thinking and doing things.

Kagan has a rather pedantic resume. There are surely a hundred or a thousand more attorneys who have demonstrated their knowledge and mastery of the law in a fashion superior to her. She has never been a judge. She has no substantial trial experience though, as Soliciter General, she has argued before the Supreme Court.

Little wonder, the former lecturer on constitutional law at the University of Chicago thinks she should be on the Supreme Court. They share a similar lack of real achievement in life by comparison with those who have built or managed companies, fought in wars, or excelled in the sciences or arts.

What they do share is an extreme, progressive outlook, filled with a hatred for guns, corporations, Wall Street, a bizarre desire to let homosexuals marry, and an admiration for all things that are not American. She will join Justice Sonia Sotomayor, another Obama choice, and Justice Ruth Bader Ginsberg, a Clinton choice, as the Supreme Court begins to looks increasingly like an old girl’s club.

Americans know they have literally trapped themselves into this situation and, until control of the Congress can pass from the Democrats to the Republicans, they are helpless to influence or to stop these egregious “changes” in our nation’s affairs.

Short of some damaging revelation, the Senate will confirm Ms. Kagan and she will serve on the Supreme Court for decades. Contrary to popular myth, the Court has made some horrendously bad decisions in the past. One would hope that the Senate Republicans would mount a filibuster to save the nation from this, but that too is not likely to happen.

Do our dear Republicans not have the guts to filibuster this hag?

This woman wouldn't make a good clerk at the local 7-11 much less a Supreme Court Justice with her obvious room temperature I.Q.

However, a Forrest Gump intellect married with Obama boot licking socialism is the key to success in our New Republic.

Inferior Obots like Kagan is the reason why many millions of intelligent, rational and hard working Americans have joined the Tea Party. This is a movement that is determined to restore the old republic created by the best minds in history.

A nation created by the best should be ruled by the best. White trash like Kagan are fit only to clean the latrines.

I suspect they feel it is not worth the effort. They're wrong.

I can't imagine how blocking this nomination could BE any more important. From what I've heard and read about that woman's philosophies, the thought of having her decisions shaping the future of this country makes me seethe with anger....

The problem is, if they succeeded in blocking her nomination, the next one would be just as bad, if not worse ...

It makes me sick to my stomach just thinking about it ...