It Doesn't Matter What Obama Says About the Oil Spill 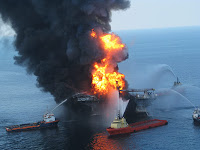 It doesn’t matter what President Obama says from the Oval Office Tuesday evening. He can lay out all manner of things that BP must do in the wake of what is shaping up to be a major ecological disaster, but he and Congress are also working to put a cap on BP’s financial liability. Both know that this leak will ultimately cost upwards of a trillion dollars or more to ameliorate.

It’s not that BP isn’t liable for the leak, but rather that it had the great, good fortune to tap what in the oil industry are called “elephants”, discoveries of huge multi-million barrel reserves. It had the bad fortune to have the huge rig blow up and a leak so far down only robots can attempt to shut it off.

What one rarely hears about are the “dry” holes that oil companies drill. They don’t make news, but they spell disaster for an oil company that does it too many times. As Tom Bower says in his timely new book, “Oil: Money, Politics, and Power in the 21st Century”, “In recent years, dry holes had wrecked major oil companies. The skeletons of Gulf, Texaco, Arco and other past icons mercilessly testified that only the fittest and bravest survived.”

The amount of investment in a single hole is significant. When that hole is in deep water, a billion dollars can be spent at a rate of hundreds of thousands a day to rent a rig. Naturally, the oil companies use every form of technology available to geologists to decide where to drill, but even then it is a high risk gamble.

To cite one BP gamble, when in 1969 Arco drilled in Alaska it only found non-commercial gas. BP geologist, Jim Spence, concluded the oil was closer to the rim of a potential reservoir instead of its “sweet spot.” The result saved BP. The company then put its chips on the Gulf of Mexico. It became the largest acreage-holder and owned a third of all the oil discovered there.

All the major oil companies knew that the Gulf of Mexico represented a treasure of oil, but it was BP that rolled the dice the most. In 2005, one deep water rig called Thunder Horse was nearly ready when Hurricane Dennis hit the Gulf and it had to be abandoned. When the engineers returned, they found flaws in some of its valves. In hindsight, it foretold the problems encountered by the Deepwater Horizon.

The irony was that BP’s latest discovery was the mother lode of oil reservoirs. Vladimir Kutcherov is a Russian specialist in the theory of the abiogenic deep origin of oil, the view that it is not created from the activity of living organisms; that oil is the result of dead dinosaurs.

Oil, it would appear, is created deep within the Earth. Kutcherov believes that BP drilled into “a migration channel”, a deep fault on which hydrocarbons generated in the depth of the planet migrate to the crust.

The other irony is that the BP disaster should put an end to the widely disseminated “peak oil” theory that says the Earth is running out of oil. If Kutcherov is right—and I think he is—that means the “hole” that President Obama and BP wants “plugged” is comparable to trying to plug a volcano. The effort could take months, if not years.

That is why whatever President Obama tells Americans and the rest of the world is probably going to be something far less than the truth. Obama faces some fearful political consequences no matter what he says. BP is heavily invested in America. It employs several thousand. It pays huge royalties. Many British pensioners depend on its dividends as do other investors.

The unions to which Obama owes much for his election are resistant to allowing non-union workers to help protect against the growing spill affecting Louisiana, Mississippi, Alabama, and Florida. The spill also threatens to reveal how closely associated BP was with many leading environmental organizations.

As F. William Engdahl, the author of “A Century of War: Anglo-American Oil Politics and the New World Order, points out in a June 11th Global Research commentary, “”The deafening silence of leading green or ecology organizations such as Greenpeace, Nature Conservancy, Sierra Club and others may well be tied to a money trail that leads right back to the oil industry, notably to BP.”

“Leading environmental organizations have gotten significant financial payoffs in recent years from BP in order that the oil company could remake itself with an ‘environmentally friendly face’, as in ‘beyond petroleum’, the company’s new branding.”

Among those groups have been the Nature Conservancy, Conservation International, the Environmental Defense Fund, Sierra Club, and Audubon.

The drive to drill in deep waters off shore was in part driven by the resistance by environmental organizations to doing so far more safely on land. The refusal to allow drilling in Alaska’s ANWR is a glaring example. The fact that oil companies began decades ago to look far afield of the U.S. and its forbidden offshore reserves of oil is another.

A president who has already managed to destroy whatever popularity he had when he took office a scant year and a half ago is not likely to survive the BP disaster no matter what he says or does.

All Americans must be especially watchful for an effort by Obama to impose what was called “Cap-and-Trade”, then called a “climate” bill, and now is touted as a “Jobs” bill. It will require a major effort to thwart the Senate from signing yet another suicidal piece of legislation that would impose huge taxes on all energy use.

As always, Mother Nature will have the final word.

It probably doesn't matter if Kutcherov is correct or if Matt Simmons is correct. The fact remains that the cheap, easily-found oil is gone. The expensive goodie that's difficult to get to is what we're chasing nowadays.

It's not what Obama says about the spill which is operative. It's the 'opportunity of crisis' so beloved of Rahm Emmanuel. Obama? His ExLax must be way out of date.