We're Doomed and Other Thoughts on the Economy 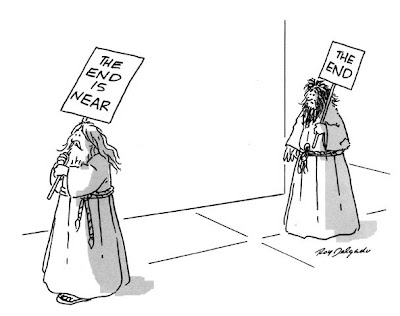 There are reports that the U.S. Treasury is predicting U.S. debt will be $15 trillion by 2015. Federal Reserve chief, Ben Bernanke just warned Congress that this is “unsustainable.”

One of our favorite cartoon characters is the guy with the sign that says, “The end of the world is coming. Repent!” You can find him enshrined in the Old Testament’s Jeremiah, between Isaiah and Ezekiel.

“I am the laughing-stock all the day, every one mocketh me,” lamented Jeremiah (Chapter 20). He was, of course, warning his fellow Israelites that trouble was headed their way and, sure enough, it was. It always is. I am 72 and have not lived a day when there wasn’t a war in progress somewhere. This also means I was born in the midst of the Great Depression and have lived long enough to see another coming my way.

A lot of people are going to get all worked up over the predicted end of the world in 2012. The prediction will sell books, there will be a movie, but the world will not end. The Earth is 4.5 billion years old and has been around before and since the Mayans who are no more.

On the contrary, our present troubles will begin to end that year when we bid goodbye to Barack Obama after the national election and begin to undue the unbelievably awful “reforms” and “transformation” he has forced upon an unwilling America. The Supreme Court may or may not play a role in this, but it will mostly be up to the voters.

I was thinking about the current financial crisis while reading a recent issue of Business Week that gave a thumbnail description of just six U.S. States that are mired in debt. Leading the pack is California, mired in $272.4 billion worth of debt. Its governor is trying to close a $19 billion gap for the year starting on July 1.

Governor Chris Christie of New Jersey took office with a debt load of $207.4 billion. He is trying to bridge an annual budget shortfall of about $11 billion. He has stunned the State and the nation by speaking the truth about it.

Illinois has a debt load of $237.3 billion, Michigan comes in at $207 and New York State has $203.8. All of these States have one thing in common, legislatures controlled by Democrats, not unlike our current Congress.

The other thing they have in common are public sector unions representing government workers, teachers, and such that have negotiated wage increases, health care benefits, and pensions that make your eyes roll when you find out the details.

The old saying, “When you’re in a hole, stop digging” applies to the federal government in general and President Obama in particular. The “stimulus” bill was one huge earmarked monstrosity that has not and will not “create” jobs. That’s something the private sector does.

Also grabbing up General Motors, taking over one-sixth of the nation’s economy in the form of healthcare, and attempting to throttle the greedy pigs of Wall Street is not working and these efforts will be repealed in one fashion or another.

It is the federal government, however, that has to take much of the responsibility for the latest financial crisis.

By way of example, the Competitive Enterprise Institute just announced “The U.S. Supreme Court will soon hand down a major ruling which could put much-needed constitutional limits on an agency that imposes incredibly burdensome accounting requirements on American companies.

The case, Free Enterprise Fund v. Public Company Accounting Oversight Board, challenges the constitutionality of the Sarbanes-Oxley corporate accounting law, which since 2002 has imposed massive burdens on businesses, entrepreneurs, and investors, with costs passed along to consumers. A decision from the Supreme Court is expected imminently, possibly next week.”

The key words here are “massive burdens.” Very slowly the process of identifying the many ways the feds have burdened Americans and the economy in the name of “social justice” is being reexamined. Why doesn’t it cure unemployment? Why are there always poor people? And why does spending more money on education not improve test scores? Et cetera!

Business Week’s May 23 issue had an article, “Rethinking Fannie and Freddie” referring to the two federally-sponsored entities, Fannie Mae and Freddie Mac, the cause of the mortgage meltdown, that have since been seized by the government in the wake of a $145 billion bailout that is likely to cost more. Something is terribly wrong when the government owns 76% of all mortgage originations.

That said, the two other social justice programs, Social Security and Medicare, have fallen afoul of the unbending law of demographics as more people reaching age 65 take out more money than a declining number of younger workers who are required to pay into these two programs can provide. In the case of Medicare, it has never worked wherever it has been tried, whether it’s Massachusetts or whole nations like Canada and England.

Nouriel Roubini, the economist who predicted the 2008 financial crisis, was interviewed recently by Charlie Rose. He was full of bad news, but common sense. He noted that “generation after generation, we seem to forget the past.” The result is, of course, the latest generation makes all the same mistakes, excessive risk-taking, debt that they could have learned about and avoided.

As I have pointed out, when interest rates for borrowing money are at zero, that essentially means the money has no real value. That in turn devalues everything else such as the homes we bought, thinking they were really piggybanks or ATM machines. When that happens, people send the keys to the banks and walk away.

Roubini, though, also noted that “Most financial institutions are making huge amounts of profits in proprietary trading—borrowing at zero rates and making investments.” That may be good for the banks and investment houses, but it does nothing for the economy, for jobs, for the ability of businesses and people to get banks to lend them the money to start or maintain new businesses.

We have to get away from the notion that businesses and banks are too big to fail. That’s why bankruptcy exists as part of capitalism’s “create destruction.” General Motors and Chrysler should have been allowed to fail. When Wall Street firms tottered there were a number of shotgun marriages to enable them to become parts of banks that, in turn, became “too big to fail.” That just delays and distorts the natural cycle of capitalism.

The whole system is being propped up by a fearful Congress and Federal Reserve, the latter being responsible for determining lending rates. Ever since Alan Greenspan and now with Ben Bernanke, the hard decisions have been put off.

It’s not just the United States. It’s most of Europe with its socialist systems. When the Soviet Union collapsed in 1991, it was telling the world that communism/socialism doesn’t work. It’s time to take this message seriously.

I've yet to see a problem which was solved by the style of thought which created it. The monetary policies of our past Fearless Leaders brought this about, and the present group is continuing along the same path.

"Got gold?" has become an in-joke among those who have identified the causes of this mess.

If you took all the articles you have written over the last 40 years and compiled them into a book you might find yourself to be the author of a best seller. it would be interesting.

Title
You Have Got To Be Kidding!

Subtitle
The Crazies Really Are In Charge; How Did This Happen?

This could be a personal journal of someone who has watched the transformation to what we have today. Outlining the characters, their motives, possible motives, and goals. Who they supported and who supported them.

It would be a nice backup of Jonah Goldberg's book, except from a personal viewpoint. From WWII to today.

Thank you, Rich, but alas the last two collections of my commentaries since 2000 did not sell very well. Not famous enough. Not on TV and radio every day. That's just the way it is. Frankly, I think being famous requires an awful lot of time and energy. I would prefer to just stick to writing.