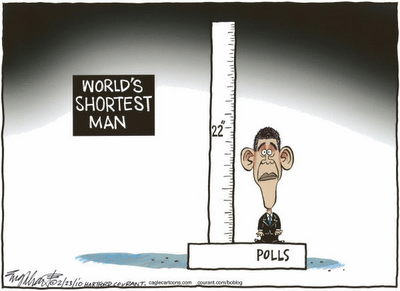 Lyndon B. Johnson said he knew the war in Vietnam was over when news anchor, Walter Cronkite, reporting from there said we were losing. On Sunday, Maureen Dowd of The New York Times lit into Barack Obama for his failure to react to the oil spill disaster in the Gulf.

“Too often it feels as though Barry is watching from a balcony, reluctant to enter the fray until the clamor of the crowd forces him to come down. The pattern is perverse,” said Dowd, adding, “The wound-tight, travel-light Obama has a distaste for the adversarial and the random.”

Lynn Cheney, the daughter of the former Vice President, speaking as part of a Sunday Fox News panel, put her finger on the problem, noting that Obama seems to believe that merely saying something is the same as doing something.

The coup de grace was delivered by Peggy Noonan in The Wall Street Journal, writing “The president, in my view, continues to govern in a way that suggests he is chronically detached from the central and immediate concerns of his countrymen.”

When the adoring mainstream media begins to back away and the base of Obama’s popularity—-what’s left of it—youth, blacks, Hispanics, enviromaniacs and the Democrat Party’s far Left have second thoughts, you have a presidency in deep trouble, but one that still has just over 960 days to serve in office.

This is a President whose political endorsement has increasingly become the kiss of death at the polls.

The news is filled with commentary about the spill being Obama’s “Katrina”, comparing him to former President Bush’s response to the category five hurricane that hit New Orleans in 2005. One can only wonder what will happen when the 2010 hurricane season begins to display once more the power of Nature over man.

Presidents don’t get to pick and choose the events that shape their term in office. They are elected to manage those events with the resources of the nation and Obama is proving to be so poor in this essential skill-set that confidence is sinking like a tar ball to the bottom of the Gulf of Mexico.

It did not go unnoticed that, after 309 days of no press conferences, the one he held to staunch the bleeding was remarkably lame for a man who gained and entered the Oval Office on the basis of his oratory.

It lasted an excruciating hour, the first fifteen or so minutes of which was taken up by a prepared statement. Unless reading from a TelePrompter, Obama’s halting, word-by-carefully-selected-word, pause-by-pause response without technological aid is painful listening.

After LBJ’s fall from grace that forced him to forego a run for a second full term, one has to go all the way back to Jimmy Carter to find a president who disappointed the voters sufficiently to end with just one term. President George H.W. Bush was a one-term president largely because Ross Perot peeled off 19% of the vote he would have received and he had broken his no new taxes pledge.

History has since revealed that President George W. Bush’s perceived failure following Katrina was largely the result of Louisiana’s incredibly inept governor at the time and New Orleans’ moronic mayor. It did not help that, despite ample warning, a large part of the city’s population failed or refused to evacuate. Even with all that, the federal government’s effort was less than stellar.

In the face of major acts of nature or an unanticipated technological failure on a deepwater oil rig, the limitations on government are manifested for everyone to see. The faith of the public in government “action” is overblown and unrealistic, but why should that come as a surprise in the wake of years of failure to close off the nation’s southern border to a full scale invasion from Mexico.

The nation has thus far suffered with a federal government since the 1970s that has shut off most domestic oil exploration and extraction.

It has failed to encourage the building of a single new nuclear plant since Three Mile Island when literally no harm occurred to anyone.

It has fallen prey to the environmentalist campaign against coal.

It has literally been responsible for the housing bubble and the predictable financial collapse that followed in its wake.

Unable to muster international opinion, North Korea still has nukes and Iran will soon have them. Meanwhile the president wants to reduce the U.S. stockpile!

The nationalization of America’s industrial and business sector mirrors what has occurred in Hugo Chavez’s Venezuela and has earned the plaudits of Chavez and Cuba’s Castro brothers.

The only thing remaining to challenge this presidency is a major expansion of war in the Middle East or anywhere else. He took three months to decide what to do in Afghanistan after having previously declared that conflict to be more important than Iraq. And he has backed off support for Israel. Not smart. And very dangerous.

He has been lucky in the failure of the Christmas and Times Square bombers and less lucky in the Fort Hood killings by an Islamic-American fanatic.

Obama is the incredibly shrinking President.

Finally people are willing to admit that Bush's handling of Katrina was horrible.

Think about it...if we are trying to say Obama is so bad by comparing him to Bush, then this is admitting that Bush was also a failure as a President.

America's luck cannot and will
not hold out under the withering stupidity of this president.

Everything you have mentioned
here is pushing us closer to
edge. Closing down all offshore
drilling for oil is a knee JERK
reaction. So do we shut all the freeways, highways because of of one or two bad accidents? No we
do not but this Islamist Muslim
loving dufus can't grovel, whine,
apologize or appease our enemies fast enough to even suit them.

He has stabbed our allies in the
back and wiped his ass on Israel.
There will be a steep price to be
paid for that and it will come
home to roost. I just pray it
does not cost us 3,000 or worse,
more American lives like 9/11 did.

Wrong, Accounting Guy. All people are saying is that Katrina was a mess, Bush did what he could which was not much, and Obama is performing about the same due to unrealistic public expectations. Neither is exonerated...but to declare the Bush presidency a failure this early is foolish. History will decide that several decades from now.

Declaring the "American industrial and business sector" victims of nationalization is laughable. The American goverment has been the puppet of multi-national(read:oil)for years.BP alone made 21 billion dollars profit last year and there only number 5. It's the most basic journalistic rule,"follow the money".If and when BP manages to cap the destruction of the gulf coast it will no doubt launch a jaunty PR campaign to show they are really sorry and then it will be business as usual. To suggest that Obama could do something to improve the situation is to miss the point,HE WORKS FOR THEM.

John, if what you believe is true, why does business and industry keep a legion of lobbyists in Washington?

The answer is that they do not control it, although some are very success in "rent seeking" to gain advantage over their competitors through special interest legislation.

In general, though, the history of the oil industry in American since the 1970s has been to be driven out of the nation in terms of drilling for new reserves, despite contributing billions in taxes because they are headquartered here and employ thousands of people here and worldwide.

Accounting Guy, I'd place a large bet on Bush being re-elected right now, if he was on the ballot ....

I agree with Alan. It's WAY too early to declare his Presidency a failure, unless you are simply a Bush hater, which you obviously are. When are you people going to give it up? He's been gone for almost TWO YEARS and still you insist on driving him into the ground. GET OVER IT. Bush certainly had his faults, but you've been programmed by the media to hate him, and the sooner you realize that, the more likely it is that you'll be able to think for yourself in the future.

I wonder how many of you armchair quarterbacks that think Bush's handling of Katrina was so bad have ever spent a single day in a position of leadership? It's real easy to sit back and soak up all the media propaganda, and conclude that Bush mis-handled the situation. But, until you have actual experience coordinating a response to a disaster of that magnitude, you have no business criticizing anyone.

The real culprits in that situation were the LOSERS in New Orleans and in their local government, who took an "every man for himself" attitude, and let the situation spin out of control.

Look at the situation in Tennessee. Most people aren't even aware that they recently suffered flooding of epic proportions there. Was there chaos there? No. And it certainly wasn't because Obama is a miracle worker. He never even showed up there...

Katrina was a disaster because it happened in an area populated by people who can't take care of themselves on a good day, not to mention in the middle of a disaster. Nobody, Obama included, could have prevented what happened in New Orleans after Katrina.

Blaming Bush for it is ridiculous, and insinuating that his Presidency was a failure because of it is just more irrational partisan politics. It serves no purpose other than to divert attention from the loser of a President that we have now.

George W and Carl Rove both admitted that had they had it to do over again, they would have taken the authority out of the hands of the Gov of LA and the Mayor immediately. Our current situation in our country reminds me of Churchill's reference to Storm Clouds Gathering. We all have recognized this pres for what he truly is. How do you contain him when his entire cabinet and czars are made up of socialists? I fear we have nothing but heartache until we get him out of there but the damage will be done by that time.

John: since when did the word "Profit" become dirty? Since when does the government have a right to tell people what they're 'allowed' to make or 'company profits'? I simply do not understand how you people out there think that because a company is profitable it is evil. My boss said the same thing to me 2 yrs. ago, "tax the hell out of the oil companies" and I told her, "well okay, then our company profits need to be capped also and every other company in the US". When that happens, we're all down the proverbial spreading-of-the-wealth socialistic/communistic tube and I quite frankly and opposed to that at all costs.