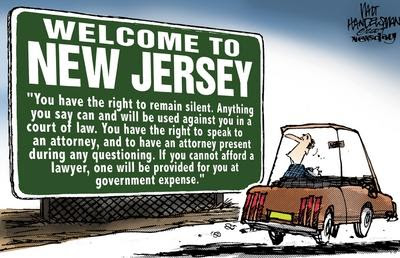 Years ago when I was planning to sell my home in Maplewood, New Jersey, my older brother invited me down to Boynton Beach, Florida. In the latter part of the 1950s I had spent four years in Florida attending and graduating from the University of Miami.

Florida’s a nice State, but when I walked out of the Palm Beach Airport, I was hit by a wall of heat and for three brutal days big brother shlepped me around to various places until I could at last escape back to my beloved Garden State.

I moved one town over to a fancy new apartment complex that has a concierge, a business center, a fitness and health club, a big outdoor pool, and I can walk three minutes to the railroad station for a thirty-minute ride into downtown New York. That was six years ago.

I cite all this to say that I have roots in New Jersey. My parents were born here. The seasons come and go without any signs of a hurricane, a tornado, mud slides or giant forest fires. We have, in some spots, the occasional flood, but they are rare. Blizzards are of little concern because the snow in cleared from the highways and streets within twenty minutes because we know how to do blizzards here.

New Jersey is attracting a lot of attention lately thanks to our new Governor, Chris Christie, a Republican and a conservative. He has become an instant media star for telling people the truth. He has flummoxed one of the worst, Democrat-controlled legislatures to be found anywhere other than California. He’s a tax-cutter and loves to fight with the teacher’s union. Best of all, Christie’s fat and he doesn’t count calories.

This testimonial for New Jersey is occasioned by all the buzz about the television show, “The Shore”, featuring some of the dumbest youngsters to be found anywhere. Before that, there was “The Sopranos” with its ode to the Mafia.

Years ago, when I used to actually get paid to write, Public Service Electric and Gas hired me to write a promotional booklet about New Jersey. Though I had been a journalist, having been the editor of two weeklies, a reporter and columnist for a daily, I was astonished at the information I gathered to sing New Jersey’s praises.

Let me share a few facts. New Jersey was settled by the Dutch in 1618. By 1702 it was a British colony. Perhaps as an insight to the combativeness that is indigenous to New Jersey, more than a hundred Revolutionary War battles were fought here! It was the third State to ratify the U.S. Constitution in 1787.

Grover Cleveland, the 22nd and 24th President of the United States was born in Caldwell, New Jersey. Woodrow Wilson was president of Princeton University before becoming a U.S. President.

New Jersey is home to one of the busiest seaports in the nation and tons of goods are transported by truck to every other State from here. It is a major State for the pharmaceuticals industry and for chemical production. It is home to the largest petroleum containment area outside of the Middle East. The incandescent light bulb, phonograph, and motion picture industry were invented in New Jersey by Thomas Edison.

We also have some of the highest taxes in the nation. And we’re broke. Big deal. So are most of the other States, plus the federal government. But we have suburbs to kill for with beautiful tree-lined streets with homes that are picture-postcard perfect.

I could go on, but I hope that the next time you see or hear something unkind about New Jersey you will also be reminded that it’s a very nice place in which to grow up and grow old.

I agree that New Jersey is a better average state, and Florida is - well - too close to the topics for comfort.

In 2004 while living is Orlando, which is in the middle of the state and 75 miles from the nearest salt water, we got hit with four hurricanes in less than six weeks.

They ain't no fun. It's like a German air raid on Britain during WW II. The first hurricane (I forget the name)knocked out the electric in our part of town for several weeks. We had to cut our way out of the neighborhood with power saws thru the downed palm trees due to the second one that rolled into town. The roof was blown off the house in the third one and everything inside was ruined. In the fourth and final hurricane that season, the car was murdered by our neighbor's 100 year plus fallen oak tree.

Lovely.
As a Jersey Girl, myself, I appreciate the compliments to my home state. (I live in extreme eastern PA now...just across the river from Trenton) I just love Chris Christie.

Last time I checked, there has never been a hurricane in Utah!

Christie is terrific! I wrote about him a month or so ago...titled it "Hurricane Christie Hits New Jersey!"

All well made points, but I would like to see N.J. put some road signs that tell out of state drivers where to make the correct turns. Driving there was a nightmare, and I make my living by being able to read maps and understand freeway and road signs.

I have a lot of family that live in N.J. My last excursion to your state was to see my cousin married....one of the most decorated cops ever in New York City. His beat is Fort Apache the Bronx. Other than the roads and the signs...it was nice visit.

Can you see if you can do something about that…if Christy can fix the mess they are in…I know he ought to be able to fix the road signs.

I hate having to drive around NJ. All the road signs lead to toxic dumps. :-)

Wow! Small world... I grew up in Freehold, NJ, then after graduating from Virginia Tech, I moved to Boynton Beach around 1998 to work at Motorola. I now live in North Carolina outside Greensboro, but would still rather live in NJ again (just can't afford it!)...

What I remember most of NJ was driving down to Ft. Dix in the 60's to visit my brother stationed there. We would always stop by the roadside stands on our way home to CT and buy that fantastic corn and tomatoes the the Garden State produced. Simply delicious!