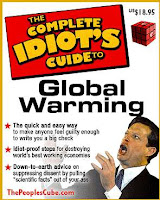 “We talked about energy. In the context of the oil spill, as I said last week during my Oval Office address, this has to be a wakeup call to the country that we are prepared and ready to move forward on a new energy strategy that the American people desperately want but for which there has been insufficient political will.”

“It is time for us to move to a clean energy future.”

Along with the totally discredited global warming hoax, this has got to be the biggest lie Obama keeps repeating, along with promises of thousands of “green jobs.”

What is Clean Energy?

Obama is referring to solar and wind energy. Neither of these enterprises would last longer than an episode of “So You Think You Can Dance” were it not for the billions of taxpayer’s dollars provided as subsidies to producers who, once the subsidies end, will abandon these most useless of all ways to generate electricity.

When the government mandates that part of the electricity you purchase must be supplied by wind or solar, they are forcing utilities to invest in means of generation that must always be backed up by coal-fired, natural gas, hydroelectric, or nuclear plants. Neither wind, nor solar can be depended upon to produce sufficient electricity, particularly during times of peak uses.

When you see those windmills turning even when there is no wind, there is a plant somewhere providing them with electricity because, unless they constantly turn, their mechanisms famously break down. Solar farms are even less efficient, particularly since the sun does not shine all the time and cloud cover often reduces their capacity.

This, however, will not deter the hoped-for thousands of people who will turn out on Saturday, June 26, to participate in some 700 events across the nation and, we’re told, worldwide in a mega-event called “Hands Across the Sand.” It is intended to encourage more “clean energy.”

“This simple, but powerful human expression of unity will send a clear message to our leaders that more offshore drilling is not the answer and now is the time to create our clean energy future,” said event founder, David Rauschkolb, described as a restaurant owner in Seaside, Florida.

That’s who we want making energy policy, a restaurant owner!

In other words, the most mendacious environmental groups, all devoted to impeding the development and access to the huge quantities of energy needed to maintain industry, agriculture, and an economy that, despite their constant interference and obstruction, is still the world’s leader in value of goods produced.

To them, the Gulf oil spill is the best thing that ever happened. One well out of hundreds in the Gulf of Mexico has suffered a horrible failure, but these are the people who want to shut down all of them despite a fifty-year history of safety.

No doubt the mainstream media will have a field day showing us coverage of countless idiots holding hands on beaches, near waterways, and wherever else they will gather in the name of not having any gasoline to fill the tanks of the cars that brought them there, not having the electricity to power the air conditioners in their homes, not having anything made from plastic, not even having asphalt on the highways and streets they will drive upon after the event.

It is not likely to occur to any of them that deepwater oil wells are the result of the bans environmental organizations continue to demand as they oppose drilling for oil in the Arctic National Wildlife Refuge or anywhere along the 85% of U.S. coastal areas where huge amounts of untapped oil and natural gas exist.

This nation faces many hazards, but the greatest hazard of all is a President who wants to pass the biggest tax in U.S. history, Cap-and-Trade, on energy use. It is not a climate bill. It is not a jobs bill.

It is just another scheme based on the fraud of reducing so-called greenhouse gas emissions. The Earth produces 97% of these emissions. They are a part of the atmosphere of the Earth, albeit the atmosphere is almost entirely composed of oxygen and nitrogen. It is best understood as primarily water vapor!

The cartoon character, Pogo, famously said, “We have met the enemy and it is us.” You can watch them join hands on Saturday and demand a return to the Dark Ages.

A pity Bush and the majority Republican Congress didn't crush the Global Hoax in the years when they held power - you didn't have to be a political genius to see where this offensive was headed.

Of course, it's a mystery to me why the GOP didn't insist that Clinton be tried for his crimes.

Do they not understand the Democrat Party is the main enemy of liberty?

I never did understand why Bush said the US is "addicted to oil" or didn't shut down all the global warming nonsense the government engaged in. He did get a grip of sorts on the EPA for awhile, but once the Democrats won power, it was a guaranteed disaster.

I call it the Jonathan Livingston Seagull philosophy of life: If you just wish for it long enough and hard enough, it will come true.

Alan, you will recall a MArch 2009 study by Dr Gabriel Calzada Alvarez (Universidad Rey Juan Carlos - Spain)who, in a detailed investigation thoroughly trashed the economics of solar and wind power. He stated that for every 'green) job created 2.2 'normal' jobs were lost.

It highlighted the massive requirement for public subsidy to enable this dead-end technology to be profitable to its investors, and the phenomenal cost to Spain's economy.

In 53 pages he completely destroys the whole concept of the 'green' power path taken by Spain now firmly driven down the road to penury and civil turmoil, caused in no small part by the dream (nightmare) of renewable energy costs.

A report this week by Christopher Horner in Pajamas Media highlights a very insidious and sinister development directed towards Dr Alvarez; I would think it constitutes a criminal act against him.
A solar energy company called Thermotechnic sent through the mail a package to Dr Alvarez containing a dismantled bomb. The inference is that the next time it won't be in bits - until it explodes in your hands!

In addition, some time earlier, the Spanish government, not liking the results of the study, pressed the university which employed Dr Alvarez to sack him for having the temerity to tell the truth.

As a result he has lost classes (and income) and is being hounded in the press by the communist trade union and Renewable Energy Association.

No only is 'green' energy an unmitigated disaster for Spain, but also for Germany, Denmark, Italy and, through utter stupidity and blindness to fact, soon to be the UK.

This spotlights the kindof people pushing this 'renewable' energy super-scam - the destroyer of nations and corrupter of leaders - and should anyone dare to publish truthfull studies then, their tenures, jobs, income and very lives are at stake.

It's all about the money, as we have always kknown, and only when we get intelligent people in power, and of this world with integrity and honesty, who have the will to subjugate the insidious 'greens' will sanity and prosperity return.

Obama is an open door to such scamming and pseudo-science and his push for 'renewables' is a leap into darkness for America.

The Europeans are in a bankrupt pit and are desperately encourageing the US to join them in their terrible woe.

Any study to the contrary could be a death sentence for its author because the 'renewable' option is a terrible mirage - they know it but will do anything to obfuscate the truth. Nice people.