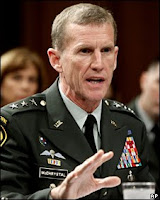 Max Boot, posting on Commentary’s online site, was apoplectic about the Rolling Stone article that has the four-star General Stanley McChrystal on the carpet, mostly for things his aides said.

“What on earth was McChrystal thinking, one wonders,” wrote Boot, “when he decided to grant so much access to an anti-war reporter from an anti-war magazine? Michael Hasting’s animus against the war shines through every inch of his article.”

What, indeed! The Pentagon public relations consultant who arranged for the article, Duncan Boothby, immediately resigned, despite the fact that he was well respected for his work. Boothby served Gen. David Petraeus during the Iraqi surge that ultimately turned the tide of the war there. The writing, however, was on the wall. Boothby made a quick exist.

Just about everyone involved in Afghanistan, the ambassador, et cetera, knows it is a bad assignment. The fact that Gen. McChrystal signed off on the article may be one more way he has tried to convey his frustration. When you have “rules of engagement” that are likely to get soldiers killed, conducting a war is uglier than usual.

Some heads will roll, but there is already a great deal of speculation about the general’s fate. Given a withdrawal date of July 2011, replacing him might prove a worse choice than returning him to the field, chastened and determined to shoot more journalists than Taliban.

Modern wars are conducted as much by maintaining public support as by defeating the enemy. This is a lesson learned in Vietnam. Perhaps the most curious aspect of the war in Afghanistan, now the longest war ever fought by the United States, is the total absence of public protests. This may reflect the fact that it began with the attack on the homeland on 9/11.

Gen. McChrystal was born into a military family in 1954. He graduated from West Point in 1976 and distinguished himself in various conventional and special operations posts. He assumed command of the U.S. Joint Special Operations Command in September 2003. Under his command, the JSOC forces captured Saddam Hussein and killed the leader of al Qaeda in Iraq, Abu Musab al-Zarqawi.

The military is a meritocracy. You don’t move up through the ranks by failing. That said, it is like all big organizations. You need to function well politically within it and at the highest levels you have to be attuned to the internal and external events, issues, and personalities involved.

I suspect that the leaders of the U.S. military were less than thrilled when Barack Obama replaced a war-time president, George W. Bush, who trusted them and their judgments. Obama has zero experience regarding military affairs.

Unlike most previous presidents, he never served a day in the military. The only uniform he ever wore was that of an Indonesian Boy Scout. He campaigned saying that the war in Iraq was a mistake, but that the war in Afghanistan was the “real” one. He’s spent his first year and a half in office blaming everything on Bush.

When Gen. McChrystal wrote, “Failure to gain the initiative and reverse the insurgent momentum in the new year…risks an outcome where defeating the insurgency is no longer possible,” he was telling the truth, but not one that Obama wanted to hear. “Additional forces are required.” Obama took him to task for his blunt assessment.

The president spent three months consulting with his military advisors before deciding to provide 30,000 additional troops. He did so, however, with a pledge to start withdrawing them in July 2011. This is not how a nation wins wars. Graduates of West Point are not taught how to lose wars.

Gen, McChrystal has since apologized to everyone from the President to the Secretary of Defense, the Chairman of the Joint Chiefs of Staff, and anyone else available. Secretary Gates said in a statement that he had exercised “poor judgment”, but it was a Pentagon PR consultant that arranged for a Rolling Stone journalist to spend time with the general. That’s poor judgment.

My guess is that Gen. McChrystal knows that his “real” job in Afghanistan was to wind down the war there with some appearance of success in a no-win situation. He probably shares the view of the top military that Obama was and is a bad choice for the job of Commander-in-Chief, but he is a soldier and his job is to follow orders.

He’s going to take a beating for the Rolling Stones’ article. Max Boot is right. It was a very bad public relations decision. It literally gave aid and comfort to the enemy. What it revealed, though, is less about Gen. McChrystal and more about a president who has demonstrated that an extreme leftist domestic agenda has always had more priority than a shooting war in which real soldiers are wounded and die.

Editor's Note: 6/23/10 -- The White House announced that Gen. McCrystal had been relieved of his command and replaced by Gen. David Petraeus.

THIN SKINNED OBAMA CAN'T TAKE CRITICISM!
GENERAL MCCHYSTAL SHOULD HAVE NEVER APOLOGIZED---TRUTH IS THE TRUTH!!-WHERE IS FREEDOM OF SPEECH?? I WOULD TAKE A BULLET BEFORE I WOULD HAVE APOLOGIZED TO OBAMA--!
WHAT IS IT WITH THESE MEN APOLOGIZING?--JUDGE'S-- SENATOR'S -CONGRESSMEN TO OBAMA ?--LATELY THESE MEN SAY SOMETHING ABOUT OBAMA -- THEN APOLOGIZE!!!--THE HELL WITH HIM.... NOW - OBAMA --BIDEN --KERRY!!! --
OUR GENERAL McCHRYSTAL HAS MORE SMART'S AND CLASS IN HIS LITTLE FINGER THAN OBAMA-& AND- KERRY? KERRY HAD OUR AMERICAN FLAG-UP SIDE DOWN(-PLEASE GOOGLE AND YOU WILL SEE KERRY'S PHOTO) -
-I HOPE TOMORROW OUR 3 STAR GENERAL MCCHRYSTAL--RESIGN'S AS HE WALKS IN THE DOOR-AND RUN'S FOR PRESIDENT AGAINST OBAMA IN 2012!!--GUESS WHO WOULD WIN--NOT OBAMA!!--OBAMA A PRESIDENT ON TRAINING WHEELS=-
A SOCIALIST -- THIN SKINNED - MUSLIM ------MCCRYSTAL--SHOULD HAVE BE A MAN AND STAND HIS GROUND!!!--NOT APOLOGIZE-SOME OF YOU MEN
GET SOME CAHOONES---I AM SURPISED ,,OBAMA HAS SOME OF THESE MEN BY THIER CAHOONES!! -
YOU MEN --BE TOUGH --LIKE SARAH PALIN --YOU ALL DON'T SEE SARAH BACK DOWN OR APOLOGIZE--NOBODY SCARES HER
-OBAMA IS A DISAPPOINTMENT FOR A PRESIDENT-AND AMERICA -- HE HAS HIS SLICKY FINGER'S INTO EVERYONE BUSINESS--
ALSO OBAMA DID SHAKE DOWN BP -THIS WAS AN ACCIDENT AND -TONY HAYWARD -- YOU DID GREAT -YOU DID NOT BUCKLE DOWN TO THOSE IDIOTS TRYING TO FRONT YOU--THEY ARE THE ONES THAT LOOKED STUPIED -
PEE WEE HERMAN WOULD HAVE BEEN A BETTER PRESIDENT THAN OBAMA!! AND PEE-WEE IS AN REAL AMERICAN WITH A REAL BIRTH CERTIFICATE -

I'm glad this "Rolling Stones Affair" broke the surface. The situation in Afghanistan has clearly went from bad to worse, and as you say Mac's real job was to wind down the war, declare victory and bring the troops home.

At least now all the Obama Regime Afghan Cards are face up on the table for all Americans to see.

We lost Afghanistan the moment that Obama announced the time table. That told the Taliban that all they had to do was hang in there for a while, and they'd be good to go.

That told the Afghan people that they were rather unimportant in the grand scheme of things that is international chess.

That told our allies that their expenditures of money, materiel and--more importantly--personnel were nothing but a waste.

McChrystal was doomed before he ever began. Petraeus, as excellent a general as there is, can fare no better.

Very nice effect, and great tutorials thanks for sharing