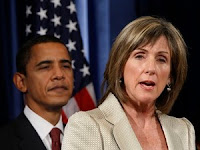 On Thursday, the Senate will vote on S.J. Resolution 26. It is an effort to stop the Environmental Protection Agency from regulating “greenhouse gas emissions” without any legislative accountability. If the vote fails, the EPA will be free to continue its assault on the nation’s economy and every aspect of your personal life.

Here’s what my friend, Dr. Kenneth P. Green, a scholar with the American Enterprise Institute, had to say about the energy and environment “advisor” to President Barack Obama:

“Carol Browner’s selection as ‘energy coordinator’ (sometimes called energy czar) virtually guarantees that the Obama administration’s energy and environmental policies will be anything but moderate.”

And that was just the nice things he had to say about Browner. It is worth noting that Browner has been the lead spokesman about the BP oil spill for the Obama administration after it became obvious that Ken Salazar, the Secretary of the Interior, was generating negative public reaction to his ‘get tough’ approach and there have been few public statements issued by Dr. Steven Chu, the Secretary of Energy.

The current administrator of the EPA is Lisa Jackson who learned her trade working under Browner until she was picked to head the New Jersey Department of Environmental Protection. A Browner acolyte, Jackson has presided over an EPA run amuck.

Jackson will be remembered for leading the EPA fight to get carbon dioxide declared a “pollutant” that can then be regulated under the Clean Air Act. This is the same reasoning put forth by the constantly renamed Cap-and-Trade Act that is was a “climate” bill and has now become something else. It is based on the same totally bogus “science” that gave us “global warming” until Mother Nature decided that the Earth should begin to cool about a decade ago.

President Obama just announced that, just like the much-hated healthcare reform bill, he is going to devote himself to getting Cap-and-Trade passed by Congress. Combined, they should be called The Destroying America’s Economy Act.

Suffice to say that, other than oxygen, carbon dioxide is the other gas on which all life on Earth depends. It’s what all vegetation “breaths” and, coincidently, it is what all humans and other animals exhale. It has nothing to do with the climate.

Dr. Green points out that, “When it comes to climate change, she is a disciple of Al Gore for whom she worked from 1988 to 1991,” adding that “Browner believes that ‘climate change is the greatest challenge ever faced’ and that the EPA is the agency to face it.”

I have been watching the EPA in action since it was created in the 1970s by Mr. Watergate himself, Richard Nixon. It has since expanded like a cancer cell, doing a lot of damage along the way. There must be a sign on the wall of EPA headquarters that says, “If it’s a chemical, we will ban it.” On May 24, the EPA announced it was discussing the perils of oil dispersants in the Gulf of Mexico. Please, let’s do nothing to disperse the oil!

From its earliest days, the EPA set out to ban or limit the use of any and all pesticides nationwide. They have never stopped. It is essential to understand that what passes for EPA “science” is merely a charade to advance their agenda.

It can cost up to $15 million or more for a company to get a pesticide registered for use. If you take away the pesticides, all that’s left is the pests, but this simple truth is lost on the EPA. They have come up with a proposed new “permit requirement that would decrease the amount of pesticides discharged to our nation’s waters and protect human health and the environment.” If you really want to protect human health, you have to kill the billions of insect and rodent pests that have always spread disease.

So far in the last month, the EPA has announced they will release “a draft health assessment for formaldehyde that focuses on evaluating the potential toxicity of inhalation exposures to this chemical.”

Also announced was news that the EPA “is initiating a rulemaking to better protect the environment and public health from the harmful effects of sanitary sewer overflows and basement backups.” They are “reviewing” Florida’s coastal water quality standards, a move that will wreak havoc on its agricultural and tourist industries.

Another EPA announcement noted that “It just got harder for a TV to earn the U.S. Environmental Protection Agency’s Energy Star. Starting May 1, 2010, TV’s that carry the government’s Energy Star label are, on average, 40 percent more efficient than conventional models.” This is all done in the name of “reducing greenhouse gas emissions” when, in fact, this is the baseless justification for the global warming hoax.

If at this point, you are beginning to think the EPA is just a tad intrusive regarding your basement backup problems, the kind of television set you should purchase, and other previous decisions such as how much water your toilet can use or the banning of incandescent light bulbs nationwide, you will be happy to know that in May the EPA took the time to “encourage ways to travel green by checking into an Energy Star labeled hotel.”

While in the hotel, you are advised to “turn off the lights and TV when leaving the hotel room”, “adjust the thermostat to an energy-saving setting so it doesn’t heat or cool the room while empty”, “to open curtains to take advantage of daylight when possible”, and “re-use linens to save both water and energy.”

If, by now, you’re getting the feeling that the EPA is more intrusive into the most mundane aspects of your life than any other government agency or combination of agencies, you’re right.

And very little of it has anything to do with protecting your health or the environment. It has everything to do with advancing a fanatical green agenda intended to threaten every form of energy production, manufacturing process, property rights, and your right to make a wide range of personal lifestyle decisions.

When Nixon founded the EPA he did it for the purpose of banning DDT. It is argued that he did it to appease the greenies of his state. Others say he did it to appease chemical company contributors who wanted to sell more expensive pesticides. Who knows, but we do know this. He couldn't do it as long as the USDA had legislative authority over the pesticides. So he created the EPA in order to strip that authority from the USDA,who opposed the ban.

EPA was founded in corruption and operated behind a curtain of lies. Nothing has changed.

The Greens can never survive the light of day, the truth. They always operate behind a curtain of lies.