America seems to produce more celebrities than anywhere other than Great Britain with its royal family and its musical and theatrical performers. Here, movies and televisions produce celebrities by the bushel and it comes as no surprise that some fancy themselves political pundits as well. 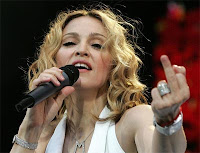 The most egregious among them of late is Madonna, possibly the world’s worst role model. At a recent concert in Washington, D.C. she endorsed Obama as a “black Muslim” amidst an expletive-filled burst of inane thoughts regarding the President.

The transcript reads: “Y'all better vote for f--king Obama, OK? For better or for worse, all right? We have a black Muslim in the White House. Now that's some amazing s--t," she said. "It means there is hope in this country. And Obama is fighting for gay rights, so support the man, goddamnit."

I fully expect the Nobel Peace Prize Committee to announce she will be receiving one any day now.

Lady Gaga—Madonna 2.0—has not been given to political pronouncements but remains a permanent embarrassment to all except adolescents.

Roseanne Barr was on with Sean Hannity recently as the candidate for president of the Peace and Freedom Party, a thin stand-in for the Socialist pretenders. She managed to embarrass herself by being unable to answer his question when they required more than five brain cells working in tandem. Like most of her ilk, she thinks that taking all the money away from billionaires will solve the nation’s fiscal woes even if it would only cover a few days of what the government spends to function.

Far be it for me to say celebrities don’t have a right to express themselves on political issues or, as Hollywood does, give gobs of money to Obama and other liberal causes. It is, I’m told, still a free country. Well, at least until Obama’s executive orders kick in and he declares himself president-for-life.

The Huffington Post has a slew of celebrities whose liberal views are published on the site. Alec Baldwin—who has been known to have anger management problems—is a regular contributor as is Marlo Thomas who holds forth on feminist issues. Russell Simmons writes about racial issues.

Political personalities and events have been the life blood of Saturday Night Live for decades, providing oodles of entertainment. I am still convinced that Chevy Chase was personally responsible for the defeat of former President Gerald Ford because of his portrayals of him falling down all the time. In his place we got Jimmy Carter who gives thanks nightly that someone worse than him is in the White House. These days Chevy occasionally erupts with a burst of liberal gibberish that is swiftly forgotten.

We can thank a former SNL comedian, Al Franken, for the passage of Obamacare. Franken, now a U.S. Senator, won by 243 votes out of nearly three million cast and those last votes were found at the bottom of a well or in a decaying tree stump somewhere in Minnesota. His was a critical vote. One of his books was devoted to slandering Rush Limbaugh.

We owe a debt of gratitude to the likes of the late Bob Hope and Johnny Carson, along with Jay Leno and even Jon Stewart for their lampooning of political figures and events. David Letterman is so in love with Obama that he is a general embarrassment and HBO’s Bill Maher should be broadcasting from the dark side of the Moon.

The current batch of Hollywood and television celebrities offering their political advice and endorsements of Obama is cringe-worthy. Oprah’s career nose-dived after endorsing him. Arnold Schwarzenegger was once a GOP-star until he served as California’s Governor and turned out to be an environmental nutcase. Jane Fonda is a pariah among veterans. And among Sean Penn’s heroes is Venezuela’s dictator, Hugo Chavez.

Clint Eastwood, by contrast, created an indelible image of Obama by talking to an empty chair at the Republican national convention.

That the entertainment industry is predominantly liberal is no secret and, if you don’t believe it, the fall season of television shows has its share of homosexual couples with one show called The New Normal. No, it’s not normal and it’s not new. If you are heavily addicted to sexual innuendo and bathroom humor then just tune in CBS, NBC, and ABC.

The recent Emmy award show opened with a comedy sketch that included a naked actress (naughty parts blurred out) on the potty. The awards were so politically correct millions of viewers were constipated the following morning.

We can expect to hear from more celebrities opining why we should vote for Obama over the next few weeks. Remember, these are people who get paid to pretend to be someone else or musicians who just might be enabled by dubious medications or booze.

The attention they get and the obscene amounts of money they’re paid tends to warp whatever common sense their parents tried to impart.

Sadly, if their parents had actually imparted any common sense it would have been a miracle..

I have long noticed that Libs beget Libs and it's rare that they ever change, but when they do you can end up with a solid Conservative... None of the above mentioned Libs will EVER make the transition...

Last night we watched Leno do the monologue and he said "Obama now has the support of *the elderly*, Madonna is supporting Obama"... I nearly fell out... LOL