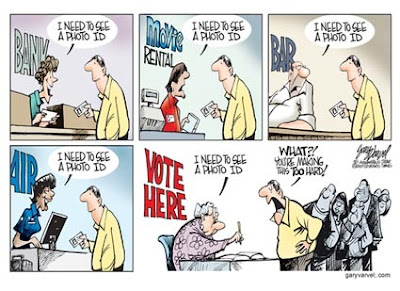 On September 25th, according to Congressional Black Caucus Chairman, Emmanuel Cleaver, “we cannot even find an instance of voter fraud” but the NAACP would disagree as it strives to keep Voter ID laws from being passed.

The NAACP is so concerned about voter rights that it has taken its case to the United Nations, claiming that “Millions of United States citizens are denied the right to vote because they have been previously convicted to a felony offense.

At a NAACP-sponsored panel, a member of its board of directors, Lorraine Miller, called upon the UN Special Rappateour “to investigate racially discriminatory elections laws” given that many felons are black and many states deny voting rights to convicted felons. The NAACP is on a tear to defeat Voter ID laws, claiming they are racially based.

At this point, between thirty-one and thirty-three States have enacted laws that require all voters to show an ID at the polls in November, depending on whether the laws are declared strict or not.

Rep. Cleaver is, shall we say, misinformed. According to a Justice Department fact sheet dated July 2, 2008, more than 140 individuals have been charged with election fraud offenses and more than a hundred have been convicted since the Attorney General’s Ballot Access and Voting initiative was launched in 2002. This is, in actuality, a fairly pathetic enforcement record.

On September 19, one day after being sued over a controversial ballot box citizenship question, Michigan Secretary of State, Ruth Johnson, said there were an estimated 4,000 non-citizens on its voter rolls of the estimated 305,000 non-citizens that live there. This is why Ms. Johnson is insisting that Michigan’s 7.34 million registered voters be asked to confirm they are citizens on Election Day in November.

The election outcome in 2000 had to be decided by the Supreme Court in Bush v. Gore and this initiated efforts to avoid a repeat by tightening voter laws to avoid all manner of fraud.

In their book, “Who’s Counting: How Fraudsters and Bureaucrats Put Your Vote at Risk”, authors John Fund and Hans Von Spakovsky, say that “Election fraud, whether it’s phony voter registrations, illegal absentee ballots, vote-buying, shady recounts, or old-fashioned ballot-box stuffing, can be found in every part of the United States, although it is probably spreading because of the ever-so-close tight red state/blue state divisions that have polarized the country and created so many close elections of late.”

“In 2012, the voter rolls in many American cities include more names than the U.S. Census listed as the total number of residents over age 18. Philadelphia’s voter rolls, for instance, have increased dramatically as the city’s population has declined.”

In 2008, following the election of Barack Obama, ACORN which engaged in widespread voter fraud had its operatives indicted in fifteen States. “At least 54 individuals who worked for ACORN have been convicted of voter fraud or related activities,” noted Fund and Von Spakovsky. It did not go unnoticed that ACORN had earlier hired Obama as a “community organizer.”

But Benjamin Jealous, the president of the NAACP asserts that blacks are the victims of “the greatest assault on voting rights…since the days of Jim Crow.” As noted, the NAACP has gone to the United Nations claiming Voter ID laws are a violation of human rights.” This is absurd. The former civil rights organization has devolved into little more than a stooge for the Democratic Party.

As Fund and Vop Spakovsky point out, “The evidence from academic studies and actual turnout in elections is overwhelming that—contrary to the shrill claims of opponents—voter ID does not suppress turnout, including among the ranks of minority, poor, and elderly voters.”

It has broad implications for the passage of laws such as Obamacare that was imposed by the slimmest majority in the Senate in 2009. In August 2009, Bill Frezza, writing in Forbes, noted that “The latest revelations that illegal votes may have given Al Franken (D-Minn) his 312-vote margin of victory in his 2008 Senate race—out of the nearly 3 million votes cast—gives one pause.” Franken’s vote was critical to its passage.

“Despite this,” noted Frezza, “Eric Holder’s Justice Department is pulling out all the stops to defeat the passage of voter ID laws, arguing that they place an undue burden that could result in some eligible voters being disenfranchised.”

How absurd is this? Valid ID’s are required by the DMV, airports, hospitals, pharmacies, when donating blood, by banks, gun shops, adoption agencies, the Social Security Office, pawn shops, courts, union elections and, yes, when voting in local, state, and national elections.

Voter fraud is not a racial issue. It is the central issue of the republic to ensure the accuracy and credibility of the election process and is crucial to the outcome of the forthcoming elections that will determine which party controls Congress and who will be President in the coming four years.

I heard something about Spain involved with counting our votes? What is that all about????

@Shelley. It has, I'm told, something to do with computerized voting machines, but I really know nothing about it.

"Voter fraud is not a racial issue."

To the extent that voter ID laws are being fought or hamstrung on the basis of race -- with opponents actually calling such laws racist on the part of whites -- obviously the Insane Left has made voter fraud a racial issue. They try to make everything a racial issue, as much as they can get away with it. All you have to do is recall what proportion of Blacks, or Hispanics, voted for Obama, and are expected to do so again -- that's why they play the race card, obviously. Rational arguments won't help change that fact, any more than rational discussion can help win the war against Islamic jihadists, or win the minds of Muslims in general. Racial politics is the most certain form of political correctness today. And we are not having a political dialogue in the US today; Americans who DO value rational discussion, to find the truth and common ground, find themselves in an unwanted guerilla-politics war with the Insane Left (which I may start calling the Jihadi Left, to make the point even clearer).

Thank you but I just know there will be voter fraud again....just how is the question!

I think a big problem with the issue is the use of the word "rights" when talking about voting. Too often, people bandy about the word "rights" as if they are talking about human rights, which is something we recognise all humans deserve, simply because they are human (freedom, speech, etc). We recognise that human rights are what we should have, regardless of whether or not the state recognises them, and governments that don't recognise them are deservedly considered tyranies, dictatorships, etc.

What they are actually talking about are granted rights, which are privileges. Granted rights can be trivial or extremely important, but they are all granted by the state, and we must qualify or earn them. Driving a car is a granted right; we qualify for it by being of age and earn it by taking tests to prove we deserve it. Voting is the same. We must be of voting age, and we must be citizens.

Considering how important voting is, you'd think voters would be proud to prove that they qualify for it.

The issue of voter ID is a no-brainer. That's why liberal Democrats don't get it .... but seriously ...

Any idiot can see that these attempts to block voter ID laws are not-too-subtle attempts to insure that Democratic voter fraud continues unabated. Their claims that requiring an ID to vote amounts to racism and disenfranchisement are completely ridiculous, and any idiot can see that too. I'm of the opinion that these blatant attempts to protect their rampant voter fraud, along with all the other outrageous, anti-American things the Democrats have done over the past few years is going to come back to bite them in this election. It also serves to reveal just how far up the ladder the corruption goes. From the looks of things, it doesn't end with Eric Holder and the DOJ ...

I can't think of too many things that anger people more than being cheated, or being treated like idiots, and Democrats are doing both to us every time they speak up against voter ID laws. In November, if we don't rise up and crush these traitors at the ballot boxes, I'm going to be very disappointed in the American people.

You can't go to the drug store and buy allergy medication without and ID, there is a plethora of things you can't do without an ID, for crying out loud, they have to have ID to get their welfare checks cashed..