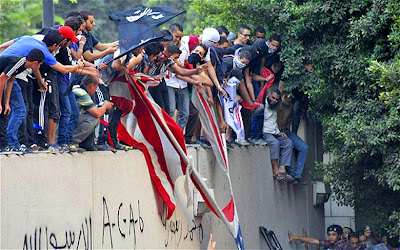 The question of the day is: When was the last time that Israelis attacked an American embassy, took hostages, or killed an American diplomat? The answer is: Never.

The answer to a similar question about Islam is a long list of such attacks going back to Iran in 1979 when American diplomats in Tehran were seized and held hostage for 444 days and most recently in Cairo, in Libya, and in Yemen, when our embassies were besieged this week. The attacks were timed to coordinate with the eleventh anniversary of the attack on America on 9/11..

Generally unknown to Americans is that, according to the Middle East Media Research Institute, in the weeks leading up to the 9/11 anniversary Muslim clerics and others throughout the Arab world repeated the fiction that 9/11 was actually orchestrated by the U.S. and Jews in order to target Islam and Muslims. Steeped in centuries of anti-Semitic Islamic teachings, this conspiracy theory is widely accepted.

The House of Mirrors in the Middle East is one in which everything is a reverse of reality. It is a narrative in which it is the Muslims who are the victims and 9/11 was an American and Jewish plot against them.

In addition to the anniversary of 9/11, the current turmoil in the Middle East is occurring as Jews around the world are preparing to celebrate their High Holy Days of Rosh Hashanah, the New Year, and Yom Kippur, the Day of Atonement.

On October 6, 1973, following a succession of wars, Israel was once again attacked. It was Yom Kippur. This exemplifies the hatred felt throughout the Middle East towards Israel. On 9/11 Americans were reminded of their hatred for our nation. Eleven years later, nothing has changed.

One would think that Israel could count on the support of the U.S. as Iran rushes to create their own nuclear weapons for the expressed purpose of destroying Israel, but the Obama administration has broken a bond that dates back to 1948 when the U.S. was the first to recognize the establishment of Israel.

President Obama has invited Egypt’s President, Mohammed Morsi, to meet with him in New York when the UN convenes a session, but pointedly could find no time in his schedule for Israel’s Premier, Bibi Netanyahu. While embassies throughout the Middle East and worldwide are on heightened alert, Obama’s highest priority is to raise money for his reelection.

That is the current status of affairs as Rosh Hashanah begins on the evening of Saturday and extends through Sunday. It occurs ten days before Yom Kippur and it is on Yom Kippur that Mamoud Ahmadinejad, the president of Iran, will address the United Nations. He will find a friendly reception because the UN has been the locus of anti-Israel, anti-Semitic sentiments for decades.

Synagogues around the United States are likely to have a strong police presence on Rosh Hashanah and Yom Kippur. Recently, in Manalapan, in my home State of New Jersey, a neighborhood was defaced by swastikas and graffiti, but while there are occasional anti-Semitic incidents the American Jewish community remains secure.

In reality, though, all Americans remain the target for Islam’s the holy war.

The coming U.S. elections are a time of choosing and it is clear that the Democratic Party has been captured by its extreme left wing. This was demonstrated when the inclusion of a platform plank mentioning God and Jerusalem as the capital of Israel required three votes for passage at the recent Democratic Party convention and was loudly booed by a significant portion of the delegates.

The convention more nearly resembled a meeting of the former Soviet Comintern and, along with his associations, statements, and actions over the years, the DNC nominee, President Obama, is hostile to Israel, having thoroughly absorbed the anti-American sermons in the Chicago church of Rev. Jeremiah Wright who, following 9/11, famously said, “the chickens have come home to roost.” He, like so many others, blames America.

So we are not just going to elect a new president in November, we are going to cast a vote for a future of much-needed economic recovery and one in which the most fundamental American values and faith are reaffirmed. We shall do so as America remains under attack by Islam.

L’Shanah Tovah, the Hebrew greeting on Rosh Hashanah translates as “May you have a good year.” For America, a good year will begin only if the nation rids itself of the worst President in its history.

OK, I guess it's MY turn, Muslims are NOT the smartest bunch, even the better educated ones, but the rank and file Muslim in the street is as dumb as dirt and will do whatever his Cleric tells him to do, up to and including bomb vests and MURDER!

These people can't be reasoned with, they get deadly angry at the drop of a hat and they ALL believe there's 72 virgins waiting for them...

Now tell me Muslim aren't dumb as dirt --- where are all of those virgins coming from?

Unless it means virgin goats...

Oops, I may offend the delicate sensitivities of Islam with that statement.. Mission accomplished!

@TexasFred...It's not just the Muslims that are dumb as dirt but a whole lot of Americans who believe the lies and smears being told by the media about Romney & Ryan. I know quite a few of them and it sickens me. The media is out to get the Republicans and they don't even try to hide it.

I like Alan's line about Obama being the worst president. He last attended an intelligence briefing on Sept. 5. You would think he would want to be as up to speed as possible with 9/11 coming up! He skipped it again yesterday to fly to Vegas for a fund raiser....nice. Oh, but I forgot, he is the Great Absorber of Information and is too smart to have to meet with his advisors and can get it all from the transcripts. He seems to me to be a man uncomfortable with his job so he punts as much as possible.

Obama is not simply a bad president - he is the new Benedict Arnold engaged in selling out America to the Communists and Islamists.

Yes, I believe he is a supporter of Islam and, if he is not a true Communist, he has very strong leanings towards Communism. Just look at those who influenced him as he grew up and those he chose to be with once he was old enough to choose his "friends". He is also a man who will not hesitate to throw his "friends" under the bus once he has no use for them or if they endanger his political career.