From Haile Selassie to Bibi Netanyahu 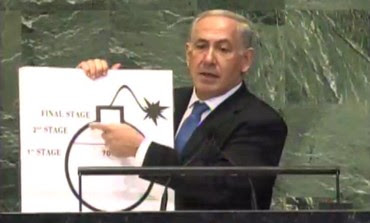 On June 20, 1936, Emperor Haile Selassie of Ethiopia addressed the League of Nations following the annexation of his nation by Italy the previous year, after Mussolini’s army had invaded. Both nations were members of the League. It condemned the invasion and had imposed economic sanctions that were weak and ignored by its members.

In the wake of having been driven from Ethiopia, Selassie warned the League’s assembled diplomats “It is us today. It will be you tomorrow.”

There are lessons to be drawn from history if one is inclined to learn history. On Thursday, September 27, just as he has for the last few years, Israeli Prime Minister Benyamin Natanyahu again addressed the General Assembly of the United Nations and again warned that time was running out for a confrontation with an Iran intent on producing its own nuclear weapons to fulfill its repeated threats to destroy Israel.

The fact that Netanyahu was back again in front of the General Assembly, essentially giving the same warning tells you how weak the United Nations is, much like its predecessor, the League of Nations. Stalin once asked how many divisions does the Pope of Rome have, mocking his moral authority, and Iran is doing the same, but it is mocking the entire world.

Netanyahu said, “If the Western nations had set red lines in the 1930s, I believe World War II would have been avoided.” He said that a clearly stated “red line” forbidding the enrichment of uranium to weapons grade levels would induce Iran to stop. Or maybe it would be more accurate to say, he hopes for that outcome.

“Today a great battle is being waged between modernity and the medieval,” said Netanyahu in the opening minutes of his address, warning that what was at stake was “not just the future of my country, but the future of the world.”

He asked of a nuclear Iran, “who would be safe in the Middle East, in Europe, in America, anywhere?” Just as Selassie had told the League of Nations, Netanyahu told the UN General Assembly a blunt truth, but it has not stirred many, including the U.S., to action except to park warships in the Persian Gulf, a familiar warning.

Netanyahu produced a simple chart in the familiar shape of an old-fashioned bomb and discussed the role and outcome of enriched uranium, noting that seven years of diplomacy has not deterred Iran from its continued, relentless program. “Sanctions have not stopped Iran ever.”

And then he said something that I suspect many in the Assembly and those watching on television probably missed. He talked of the plants in which the enrichment process is taking place and said, “These plants are visible and vulnerable.”

“The relevant question,” said Netanyahu, “is not at what point Iran will get the bomb, but when they can be stopped from getting it.”

This observer thinks Israel is on its own and knows it. There may be cooperation from other nations who take the Iranian threat seriously, but whatever steps Israel must take to stop Iran from having a nuclear weapon, it will largely have to do while the diplomats and leaders of Western and other nations cower in their embassies, chancelleries, consulates, and seats of government in storied capitol cities.

Israel will be tasked to save the West because the West, once again, cannot find the courage to save itself, just like in 1936.

I pretty much agree, but I think it is not lack of courage in the Western peoples -- it is lack of rational judgment, in fact, it is the active, determined dismissal of good judgment in favor of one's favorite dogma (with Obama the favored dogma of the Left now). Too much self-serving "victimhood" in the beliefs of the electorate, with the obvious corollary that the government owes them what the Left tells them they deserve. I have as little as just about anyone, but I don't blame it on the government. But then, I am an adult, and have been one for a long time. As one who has made truly great scientific discoveries, which the world has for the last 10 years determinedly shown me it doesn't want to hear about, the intellectual avoidance of reality by just about everyone today is MY enemy.

@Harry: History is filled with serious scientists who were ignored in their lifetime or were heaped with abuse for blazing new fields of knowledge. The problem is that there are far more stupid people in the world and by stupid I include even the "over educated" who remain spiteful children.

The West has picked the wrong horse to back once again - Iran. Can you believe it? How can the West sit on their hands and allow this madman and his radical Imams to dictate what will happen in the ME? As Netanyahu rightly said, it's not just Israel who should fear a nuclear Iran. It's also Europe, the USA and other Western countries. Even his fellow Muslim countries should fear this. Yet all they do is ignore the warnings because it's Israel issuing them! How stupid can the world leaders be? Apart from Canada - who walked out of Amadinerjackets' crazy rant - it seems they all can be mightily ignorant and stupid, even our Australian Fabian Socialist PM.

It is time to face it. This nation/ Obama has crossed the stream and joined the forces of Islam. Obama keeps wanting to put everything on hold until after the election, including Russia, Greece or Spain's economic collapse, and the attack on Iran. If he can delay that attack until he is reelected he plans to enter the war on the side of Islam
http://www.freedomrings1776.com/2012/09/obama-actually-wants-israel-to-attack.html#more

IF Obama is reelected and IF he attempts to join America in an unholy military alliance with Islam, he very likely will find himself overthrown in a real Tea Party Revolution.

@Alan: The Bell Curve - half the people in the world are average I.Q. and above - however, half are below average.

Like the poor, the stupid will always be with us and inevitable vote for socialist scum like Obama because they are emotion based and lack the intelligence to reason.

@Ronald: Please no IQ tests. There are enough over-educated idiots in the world.