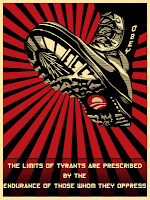 A September 24 a Wall Street Journal editorial warned that President Obama is moving to control the Internet by executive order. “Any day now, the White House will issue an executive order on cyber security, according to Homeland Security Secretary Janet Napolitano who said last week that the measure ‘is close to completion.’”

It noted that “the White House intends to go ahead with its order in the face of vociferous opposition on Capitol Hill.”

“According to leaked versions of the draft, the executive order would impose security standards for 16 critical industries” and that “private companies have innovated and invested heavily to protect themselves without regulatory prodding. What they need from the government is an information-sharing program and liability protection.”

This is just one more executive order that would, along with others, impose a totalitarian control over every aspect of life in America on the pretext of a national emergency. We had a national emergency on 9/11 and no laws were abrogated, no Constitutional freedoms denied.

A Homeland Security Department study, “Hot Spots of Terrorism and Other Crimes in the United States 1970-2008”, listed Americans who are “fiercely nationalistic”, “suspicious of centralized federal authority” and “reverent of individual liberty” as potential terrorists.

Jeffery T. Kuhmer, writing in The Washington Times in March, noted that “On March 15, the White House released an executive order, ‘National Defense Resources Preparedness.’ The document is stunning in its audacity and a flagrant violation of the Constitution.”

To understand how extensive this is, the Western Center for Journalism published a list of “Obama’s Worst Executive Orders” asserting that some 900 Obama executive orders had been initiated when in fact Obama has signed 139. However, added to active EOs from previous administrations, the Center is correct in its fears that he is "creating a martial law ‘Disney Land’ of control covering everything imaginable.”

Executive Order 10990 allows the Government to take over all modes of transportation and control of highways and seaports.

Executive Order 10995 allows the government to seize and control the communication media.

Executive Order 10997 allows the government to take over all electrical power, gas, petroleum, fuels, and minerals.

Executive Order 11001 allows the government to take over all health education and welfare functions.

Executive Order 11002 designates the Postmaster General to operate a national registration of all persons.

Executive Order 11003 allows the government to take over all airports and aircraft, including commercial aircraft.

Executive Order 11004 allows the Housing and Finance Authority to relocate and establish new locations for populations.

Executive Order 11051 specifies the responsibility of the Office of Emergency Planning and gives authorization to put all Executive Orders into effect in times of increased international tensions and economic or financial crisis.

Executive Order 11310 grants authority to the Department of Justice to enforce the plans set out in Executive Orders, to institute Industrial support, to establish judicial and legislative liaison, to control all aliens, to operate penal and correctional institutions, and to advise and assist the President.

Executive Order 11921 allows the Federal Emergency Preparedness Agency to develop plans to establish control over the mechanisms of production and distribution of energy sources, wages, salaries, credit, and the flow of money in U.S. financial institutions in any undefined national emergency. It also provides that when the president declares a state of emergency, Congress cannot review the action for six months.

These executive orders are a blueprint for the takeover by the government by White House fiat, by-passing Congress.

By declaring that “international tensions and economic or financial crisis” or a “national emergency” exists, it puts all powers of governance in the hands of one man, Barack Hussein Obama.

Do you want to live in such a nation?

Dear Mr. Caruba,
I am a devoted follower of your column. You need to check your sources on this one though as most of what appears here is incorrect or misleading at best. BO's executive orders begin with number 13489. Those listed in your column date back as far as JFK in 1962. Please check: http://1461days.blogspot.com/2009/01/current-list-of-president-obamas.html
Western Center for Journalism editors corrected their misleading report by referring to the above blog. BO has issued 139 EOs which may be extending executive authority beyond our wishes, but the reporting on this subject is lame and not up to your standards.
Best Regards,
Jim Hall

Thanks, Jim. The original text of my commentary has been altered to reflect the Western Center for Journalism's error. I appreciate your calling this to my attention.
Alan C.

I would love to see him try!

@Eddy: Me, too. I have visions of him being dragged from the White House by a mob.