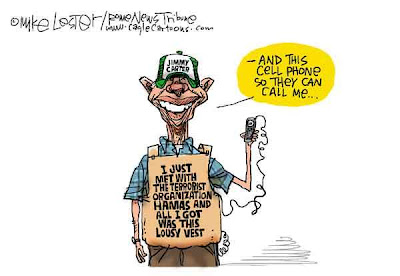 An interesting and disturbing pattern is emerging in the Obama White House. It evoked little comment in the mainstream press when he returned a bust of Winston Churchill to the British embassy and then gave short shrift to a recent visit by UK Prime Minister, Gordon Brown, albeit the UK’s support of this nation through thick and thin.

This was pre-dated by Obama’s calls for negotiations with Iran, an implacable enemy since it first took U.S. diplomats hostage in 1979. It includes more recent comments to the effect that we should be negotiating with members of the Taliban in Afghanistan. What’s next? An invitation to Osama bin Laden to share a glass of camel’s milk some weekend at his convenience?

The last century and now this one is testimony to the liberal embrace of every totalitarian regime and, in particular, those that engaged in mass murder, whether it be the Soviets, Mao’s Red China, the communist Vietnamese, or Fidel’s Cuba.

You could call it a fatal attraction and it is exposed in Jamie Glazov’s excellent new book, “United in Hate: The Left’s Romance with Tyranny and Terror” ($29.95, WND Books). I recommend it because, as you read it, you will begin to understand why so many “intellectuals” of the Left and many of the Hollywood community were and continue to be eager to embrace the enemies of freedom throughout the world.

The most famous of the latter is Jane Fonda who visited North Vietnam at a time America was engaged in war with that nation. More recently, Sean Penn disgraced himself as an apologist for the tyranny of the late, unlamented Saddam Hussein, as well as becoming the new-found friend of Venezuela’s Huge Chavez. Jimmy Carter has never met a dictator or Islamist terror organization he could not embrace.

In the tradition of Eric Hoffer’s breakthrough book, “The True Believer”, Glazov points to the way those that blame America for its capitalism, its economic success, and its celebration of consumerism, as the reason why some hate us. They always profess to be advocates for “peace”, “social justice” and “equality.”

They are people who profess to love “humanity” and who empathize with the alleged “victims of capitalism.” Glazov says “The megalomania and narcissism from which most believers suffer reinforce this dynamic.”

“To keep this toxic mindset in place, the believer must convince himself that he knows something that ordinary human beings do not.”

One of the most distinguishing factors of totalitarian regimes, aside from the fact that they murder or imprison countless people deemed “enemies of the state” is the way they make mush of words that describe reality.

We saw this practice emerge in the Obama administration when the new Director of Homeland Security could not bring herself to actually say the word “terror” when testifying before Congress. Memorandums are flying around DC agencies to avoid words like Islamist and terrorist, substituting “extremist” instead.

Glazov points out it should come as no surprise that “fascism and communism were centrally involved in the birth and development of Islamism. The Nazis, for instance, helped create Egypt’s Muslim Brotherhood, a pioneering Islamic extremist group founded in 1928.”

Why, for example, would the Obama administration offer nearly a billion dollars to Hamas to “rebuild Gaza” when they spent the last four years rocketing Israel?

Conservatives know there is evil in the world and they have their antenna on alert for signs of it here at home and abroad. Too many celebrated and party line Liberals, however, are drawn to today’s ideological butchers like moths to a flame.

Read Glazov’s new book. Watch who Obama calls his friends, appoints to position of power, and how he steers America’s foreign policy to reflect the Left’s love affair with murderous regimes while dissing our real friends.
Posted by Alan Caruba at 1:02 PM

The level of anti-American leaders in power is truly frightening... if only people knew.

Who do I blame that we have Obama as our President? The church pulpits!!! The famous French historian,Alexis du Tocqueville, observed in his book Dmocracy in America, that America flourished because of the deep, abiding faith of many citizens, attributable to the powerful and faithful preachers that stood behind the pulpits.

When was the last time you heard a church pulpit engaged the culture? Our churches' leaders are more concerned about being 'politically correct' so as not to offend a church member and pay a hefty consequence of losing this person's tithes or offerings. Our church leaders became consumed, like the rest of the world, about prosperity and growth, they forget what their true calling was about--to preach the truth to the people!

This story about the government of Iran and their infiltration into the lobby groups for Washington seems pretty germane to this subject.
http://www.worldtribune.com/worldtribune/WTARC/2009/me_iran0230_03_19.asp