Wild Turkeys in the North Ward 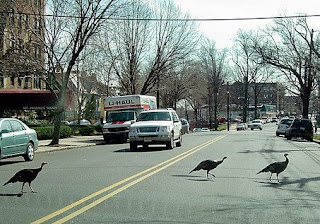 Every so often you will hear the usual weeping and wailing about how we terrible humans have displaced Mother Nature’s wild creatures by selfishly building houses and other structures in “their” habitat. For years it seemed the only thing the mainstream media could write about was “urban sprawl.”

The Sunday edition of my local daily carried a story about wild turkeys showing up in the North Ward which just happens to be part of Newark, New Jersey! It doesn’t get more “urban” than Newark.

Newark is not famous for its wild turkey population, but the fact is that sightings of wild turkeys have been quite common throughout northern New Jersey for many years. The television series, “The Sopranos”, made various locations around this part of the state famous and in one episode, Tony actually sighted a black bear in his suburban back yard.

I recall a personal encounter with a turkey in my back yard before I moved to the relative safety of an apartment complex one town over. They come equipped with a bad attitude which I suppose for New Jersey is not surprising especially if you’re trespassing. I swiftly concluded that, short of a shotgun, I was better off inside the house until it left.

As Pat Scheuer, director of the wildlife center Lorrimer Sanctuary in northern Bergen County noted, “It’s pretty normal.” Bouncing back from having been over-hunted about two decades or more ago, the turkeys are everywhere. And it’s not just New Jersey.

The turkeys have made a nuisance of themselves in Jackson, Michigan and Tilburn, California, to name just two places where they have been reported for destroying landscaping and scratching automobiles.

Another animal-related activity was also reported in the local daily. It was the culling of the state’s deer population by bow hunters. This culling process is now so commonplace that PETA and other animal rights folks have stopped showing up to protest. Given a choice of some demented PETA person in their yards or a bunch of deer, most residents would take the PETA nutcase because they won’t eat the expensive shrubbery.

So, let’s see, wild turkeys, deer, and black bears. When you add in the Canada geese that are everywhere despoiling public parks and other large stretches of greenery, New Jersey is a veritable zoo.

One hardly bothers to mention the vast population of raccoons that share our suburbs because of the multi-course dinners that are available in garbage cans. Opossum and battalions of squirrels complete the wildlife. The songbirds, of course, are welcome, but the rest of these critters keep an army of animal control officers on the move when not corralling stray dogs and cats.

The next time someone says we are depriving such creatures of their habitat, take them on a tour of beautiful New Jersey, the most densely populated (by humans) State in the Union. A drive up Route 78 with the dead deer lying by the roadside should convince them that there are likely too many deer in the vicinity.

If you happen to be in the North Ward of Newark, keep an eye out for those wild turkeys.

A hat tip to Sam Delgado who took the photo in the North Ward.
Posted by Alan Caruba at 7:45 AM

I've read stories about the early years in Ohio when settlers ate so much turkey, they got sick of it. Turkeys used to roam Ohio in flocks of hundreds and were pretty much pests. They were over-hunted for many years, and eventually became pretty scare around here. Then, we discovered the domestic chicken. They're easier to harvest, and lay plenty of eggs to eat too. Bag limits were imposed on turkeys, the populations of other predators were thinned out, and the turkeys rebounded. We see them by the dozens around here now. As a result, the coyotes and foxes are making a comeback too. Nature usually does a fine job of sorting it all out as long as we don't short-circuit the process. If we can just use a little common sense, and let nature take it's course, we can all get along just fine together ...