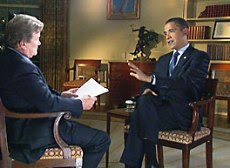 Years ago there was a Broadway show, “Mr. Wonderful”, built around Sammy Davis, Jr. On the matinee that I saw it, Davis decided he was too tired or bored to continue and called the second act to a close by turning to the audience to tell them how the show ended and sing a short encore.

No one complained. After all, he was Sammy Davis, Jr., already a famed member of the Las Vegas “rat pack” that included his pals Frank Sinatra and Dean Martin.

For many in the mainstream media Barack Hussein Obama is Mr. Wonderful.

Obama’s growing problem, however, is that a lot of people are already beginning to complain about his act. He is already the object of derision for never going anywhere without a Teleprompter.

He probably thinks he can get away with it, but Mr. Smooth, Mr. Imperturbable, Mr. Wonderful, is growing old and doing so quickly.

When “Sixty Minutes” reporter, Steve Kroft, opened his half-hour interview with Obama, he did so noting that, other than his political campaign, Obama had no previous executive experience. Kroft looked increasingly skeptical and even uncomfortable with the President.

At one point Kroft chided him for treating the financial crisis and other issues with a smile that came too easily in the course of discussing them. Obama referred to it as “gallows humor” but few people are smiling at the prospect of rising unemployment, housing foreclosures, and business failures.

Obama’s studied effort to portray himself as in control of events and issues is less and less convincing.

It was instructive when, on the same Sunday, the uber-liberals of The New York Times, Frank Rich and Maureen Dowd, were both busy expressing doubts about Obama and his advisors. Even the editorial reflected dissatisfaction.

In a piece titled, “Has a ‘Katrina Moment’ arrived?” Rich bluntly wrote that, “To get ahead of the anger, Obama must do what he has repeatedly promised but not always done: make everything about his economic policies transparent and hold every player accountable. His administration must start actually answering the questions that officials like Geithner and Summers routinely duck.”

Transparency and oversight, however, was supposed to be the job of Congress and various regulatory agencies that utterly failed to act on repeated warnings about Fannie Mae and Freddie Mac, the activities of hedge funds such as the one run by Bernard Madoff, and the general practices of the banking and investment community.

In “Toxic R Us”, Dowd who apparently is still enamored of Michelle Obama took note of the symbolic vegetable garden being planted behind the White House. “The tableau of Michelle Obama hoisting a pitchfork on Friday with her sinewy arms and warning that the commander in chief would be commandeered into yard work left me wondering if the wrong Obama is in the Oval.”

Whether the right Obama, Barack, is also the right man to be in the Oval Office during this time of crisis is being voiced by New York Times columnists and a whole lot of other people barely two months since his inauguration.

For his part, Obama told Kroft that many of the decisions that arrive at the Oval Office are between the bad and the worse choices.

So far, however, Obama has endorsed and repeated nearly all the errors made in response to the Great Depression; raising taxes instead of cutting them, rolling out costly “stimulus” programs instead of instituting changes that will make it easier for small business owners to survive, offering financial assistance to people who should not have received mortgages in the first place, and attacking banks and bankers instead of reassuring them that their government is going to help by removing their “toxic paper” in order to let them get back to lending.

Simply giving the banks billions appears to have been foolish in the extreme, but so were the meaningless “stimulus” checks dispensed during the last year of the Bush administration. What Americans have been witnessing are responses to the crisis that we might expect from children as opposed to people who presumably know how the financial system is supposed to work.

From Jay Leno to Sixty Minutes, increasingly Obama’s problem is seen as being over-exposed in the truest sense of the word. His weaknesses are being exposed despite his bravado. People are noticing. It worries them.

If you think the media chatteratti and just ordinary folks are worried, consider what it must be like for the heads of state of allies around the world? Consider, too, that our enemies are beginning to think that the President of the United States is, at heart, weak.

Think back now to the feeling of confidence we had following 9/11 when President Bush showed up at Ground Zero and promised swift retribution to al Qaeda in Afghanistan. Think about the many United Nations resolutions Saddam Hussein had ignored and the satisfaction you felt when he was toppled from office, fished out of a hole in the ground, and finally hung.

George W. Bush was a victim of Hurricane Katrina like all those folks along the gulf coast, but probably no one was more surprised than he to discover how incompetent the Governor of Louisiana and the Mayor of New Orleans were, along with his own director of FEMA.

Katrina has become the perfect example of how poorly a huge, centralized government functions in a perfect storm.

Bush just soldiered on through 9/11, Hurricane Katrina, and other problems. You knew he would do his best and his best would get us through.

You can’t say that about Barack Obama.
Posted by Alan Caruba at 12:29 PM

Presidents do not appear on late-night TV.

The White House does not belong to the President - any President. We'll have to send them a bill after 2012 to repair all the damage they're doing (starting with the lawn).

They've probably beefed up the security around the White House these days, given the growing unhappyness with B. Hussein.

The Left may have hated Bush, but they liked having around to beat up.

Their problem now is the BO is just an increasing embarrassment to them.