Saturday: Keep Your Lights on Tonight! 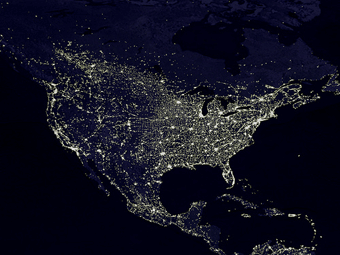 Does it sometimes seem like everything you read, see or do has the word “Green” attached to it?

We have a Green President and a Green Congress. More and more products and services tout themselves as Green. We are paying more and more with greenbacks—dollars—that are in danger of losing what value they once had.

Green was not always the great, amorphous dream of achieving oneness with Mother Earth. People still talk about being “Green with envy” or “Turning Green” just before a projectile vomit attack.

We have reached this nauseating time in our society as the result of a vast environmental movement, truly worldwide, that are masters of propaganda and possessed of the millions necessary to brainwash a lot of people into accepting an endless assault on all the advancements in science, engineering, and technology we accept as part of our everyday lives.

So, naturally, the World Wildlife Fund has come up with “Earth Hour”, an event in which at 8:30PM, Saturday night, in everyone’s respective time zone, people will be asked to turn off their lights and, presumably, the use of all electricity to increase awareness of “energy conservation.”

Two questions: What does this have to do with wildlife? And why should anyone bother?

What need is there to “conserve energy?” One either uses it or does not. You can’t “conserve” it. You can use more or less of it, but you cannot save it up for later. Electricity is always “now.”

Is the Earth running out of coal? Hardly, the Chinese can’t build coal-fired plants fast enough to generate the electricity to grow their economy. In India, they’re launched on a huge program to build nuclear plants for the same reason. A nation without adequate electricity is strictly Third World.

Nor is the Earth running out of oil. The rumor is that there are vast amounts in the Arctic and both the U.S. and Russia are making nasty noises at one another to ensure that neither one or the other gains control of it. Brazil just struck oil way offshore of its beautiful beaches and you don’t hear them complaining about it.

The U.S., of course, has vast untapped reserves of oil offshore and an estimated 3 to 4.3 BILLION barrels of it in the Bakken Formation under North Dakota and Montana. There’s oil under Utah as well. We’re not running out of oil in the United States. We just can’t drill for it thanks to Congress and the White House.

We can’t build coal-fired plants either because the Greens keep telling us that coal is “dirty.” The electricity it provides—just over half of all that’s used nationwide—isn’t dirty. Soon, though, they’re won’t be enough of it because our Green President thinks that solar and wind can provide it. It can’t and it won’t. Ever.

Otherwise, the next moron that talks about conserving energy should be stuffed in a barrel and allowed to float over the Niagara Falls which, during Earth Hour, will not be lighted.

We will all be treated to the idiotic sight of a darkened Empire State Building and other similar structures around the world such as the Eiffel Tower, the Golden Gate Bridge, Las Vegas strip, the Gateway Arch in St. Louis, the London Eye Ferris wheel, and the Pyramids of Egypt.

For a whole hour they will go dark to remind us to “conserve energy” that does not need conserving. It needs to be expanded into parts of the world where there is no electricity and, as a result, there is no economy which is another way of saying there is a lot of poverty, sickness, and early death.
Posted by Alan Caruba at 6:40 PM

Thanks for the reminder...to have our computers, TV's, microwave, stereo, radio, hairdryers, fans, oven, DVD player, and anything else electronic I can think of, running!

ALL my lights will be on!!!
Thanks for the "green" reminder.

We need to come up with a "color" for all of us reality based environmentalist. Any ideas?

For FUN, check out my new blog. I think you'll enjoy it and get a good laugh or two.

Neil's blog is very tongue-in-cheek and very on target. I recommend it for a good laugh at the pomposity of The One.

My lights were on, also. America had better wake up soon, or we won't be ALLOWED to turn them on during such demonstrations!