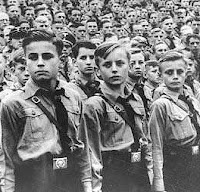 Whether it was the Hitler Youth or Mao’s Red Guard, one of the elements of every totalitarian regime is to create organizations that indoctrinate a nation’s youth to blindly follow the leader.

They are a far cry from America’s Boy and Girl Scout movement in which patriotism mixes with learning a wide variety of useful skills and, if you’ve been paying attention, the Boy Scouts refusal to permit gays to participate has cost them various forms of support. In June 2000, the Supreme Court ruled that the Boys Scouts were within their Constitutional rights hold this position.

The Boy and Girl Scouts are private groups, but a far more insidious government sponsored youth corps is making its way through Congress. In late March the House of Representatives approved a plan to set up a new “volunteer corps” for the nation’s youth. The legislation makes references to “uniforms” and the need to train future “public sector leaders.” Nothing much about it sounds voluntary.

The current problem is all that talk by Barack Obama of a “National Civilian Security Force” which he envisioned as being as big and well-funded as the U.S. military. That would put it somewhere in the vicinity of more than a million, all goose-stepping around your city or hometown like some homegrown Taliban.

To assist this Force, Rep. Alcee Hastings (D-FL) introduced a bill in February (H.R. 645) to construct no fewer than six “national emergency centers” that reek of the camps the Nazis set up initially to imprison their political enemies and later to kill Jews, Catholics, trade unionists, homosexuals, and gypsies.

Meanwhile, over on Capitol Hill, Obama’s Secretary of the Treasury, Timothy F. Geithner wants more and more power to regulate everything in the nation’s financial sector. Banks stocks plummeted on that news.

If the existing government entities such as the Federal Reserve, the Securities and Exchange Commission, Federal Deposit Insurance Corporation, and the Security Investors Protection Corporation to name a few were blind to the growing threat to the nation’s financial system, why would we think some supra-agency would offer any more protection?

“It all comes down to whether these agencies were actually willing to exercise their authority,” an insider with decades of experience said to me when I posed that question. It was not just their failure, but included the cover up by members of Congress who protected Fannie Mae and Freddie Mac until both government sponsored entities had to be seized before a complete implosion occurred.

For a bit of legerdemain, while everyone was watching the White House scoundrels, the House of Representatives voted 285-140 in late March to put approximately 1.2 million acres off limits for any natural resource development. By this vote, they denied Americans access to 8.8 trillion cubic feet of natural gas and 300 million barrels of oil according to the Interior Department’s Bureau of land Management.

The BLM oversees 26 million acres designated as part of the National Landscape Conservation System that environmentalists say permanently “protects” the land. This Green Talk for further denying Americans access to our vast natural resources, leaving us forever dependent on foreign oil and natural gas despite the endless nauseating talk of becoming “energy independent” in the name of national security.

From proposed youth corps, to civilian security forces, to expanded regulation of the nation’s banking and investment sectors, to the set-aside of lands representing natural resources that will never be available, the net grows wider and tighter to curtail the freedoms Americans take for granted and deny them the energy they require.

It’s something to think about before the knock on the door late at night or in the early morning hours before you’re taken off to a concentration camp for having dared to express an opinion.
Posted by Alan Caruba at 12:39 PM

Great article Alan as always.
A few of us saw this coming and tried to give warning, but it came to pass while they were sleeping.
Global everything is the goal, and we are on the threshold.

I think you good folk of the US of A will have to give serious thought to emigrating to Russia.

Good luck! May you weather the storm.