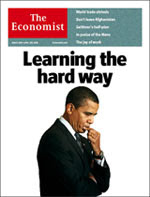 The Economist is a weekly magazine whose headquarters is London and which is widely respected for its global coverage of political, social and, of course, business news. It also has a relentlessly liberal outlook which is to be expected given Great Britain’s nanny state mentality.

Former Prime Minister, Margaret Thatcher, a conservative and a contemporary of Ronald Reagan, pointed out that the problem with socialism is that eventually you run out of other people’s money.

It took from January 17, 2009 to March 28, 2009 for The Economist to lose its virginity so far as Barack Obama was concerned. Like most of the media, the magazine greeted his succession to the office of President with a schoolgirl’s gushing enthusiasm.

“Renewing America” was the January cover story welcoming him to high office saying, “Mr. Obama carries with him the hopes of the planet.” Not just America. The planet!

How far left is The Economist? “In some ways,” it opined in January, “the times cry out for more active government: for stronger regulation of banks and near-banks, for much more short-term government spending to counteract the contraction elsewhere in the economy, and for the establishment of a basic health-care system for everyone.” This tends to overlook the obvious fact that this is a description of the conditions that led to the current financial meltdown.

The existing regulation of U.S. banks was not accompanied by anything faintly resembling actual scrutiny and oversight. It was the government that had created Fannie Mae and Freddie Mac to buy up and “securitize” all those bad loans banks and mortgage companies were required by law to make.

The short-term spending in the billions that has been made is widely regarded as a massive waste of taxpayer dollars. And Britain’s health-care system is an appalling deathtrap for anyone in need of immediate care. It is one in which bureaucrats literally decide who shall die if they have the misfortune of having a particular form of cancer.

In January, The Economist noted that Obama had “put together a team which has impressed almost everyone with its caliber and centrism.” Oh yeah?

By late March, The Economist was echoing Hillary Clinton’s comment during the campaign that the Oval Office is no place for on-the-job training. “It went to the heart of the nagging worry about the silver-tongued young senator from Illinois; that he lacked even the slightest executive experience, and that in his brief career he had never really stood up to powerful interests, whether in his home city of Chicago or in the wider world.”

One can only imagine how he shall be judged by the heads of state at the upcoming G-20 meeting in the UK. One suspects that, if there is any candor to be had, they will take him into some room far from public view and beat the living tar out of him. It is an understatement to say they are very unhappy with this young Marxist.

From its optimism in January to its pessimism of March, The Economist concluded that Obama “has a long way to travel if he is to serve his country—and the world—as he should.” The tone of the editorial was not a hopeful one.

Indeed, many in the media that could not wait for Obama to take office are now experiencing some severe buyer’s remorse. It is instructive to watch them inch their way out of the cheering section, but it is altogether too late.

Barack Hussein Obama is the President and only the return of Republican control of Congress will be able to put any brakes on his intention to bankrupt the nation and take the rest of the world with it.
Posted by Alan Caruba at 12:34 PM

FWIW, I have not found anyone else in the blogosphere that speaks my mind better than you do. Your posts make my days much more enjoyable. Keep it up, fellow AMERICAN.

Is Obama the most left wing President ever do you think, or were his D. predecessors more fervent ?

I'm interested, because here in NZ, we have had 3 terms of a "socialist" government, and although uncomfortable the sky didn't fall in. Similarly other democracies, UK being the prime example have dealt with extreme left governments and it took Thatcher to restore some economic growth. The point being that the USA must be pretty resilient to take the lean to the left, and will surely recoil back again...

Not to say that his negative influence won't be felt for many years, but socialism doesn't have a future...we are just slow learners...

The USA has any number of socialist programs in place including, of course, Social Security and Medicare. Under both Democrat and Republican Presidents, these programs have been expanded, so there is blame enough to go around. That said, they have no doubt helped many people, particularly senior citizens.

My feeling is that, so long as the economy is sound, nobody minds. When it goes south, everybody asks questions about them and, right now, the general fear seems to be that the government is rapidly expanding into the private sector. This is something most Americans knowingly or unknowingly fear.