Sailing on the USS Obama 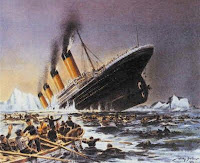 There’s a song, “Smooth Operator”, sung by the incomparable Sade that kept running through my head as I listened to Barack Obama conduct an hour-long press conference Tuesday evening.

At the very end, he referred to the American government and economy as “a big ocean liner” that doesn’t turn around swiftly and the last image that passed through my mind was that of the Titanic sinking beneath the waves of the chill Atlantic.

One is reminded why the crowds loved him as he campaigned for the presidency, their hearts beating as one, seeing before them the man who would bring “change” when elected.

He has brought change. His proposed budget would triple the national debt. According to the Congressional Budget Office, Obama’s proposed budget would generate deficits averaging almost $1 trillion a year in red ink over 2010-2019. Moreover, the deficit would never go below 4% of the size of the economy, which an Associated Press report noted were “figures that economists agree are unsustainable” The figure cited was $9.3 trillion over the next decade, “more than four times the deficits of Republican George W. Bush’s presidency.”

None of this seemed to perturb Obama.

What was most noticeable, if one was actually paying attention to the substance of what he was saying, was the repeated use of the word “invest”. Democrats never “spend” money, they “invest” it.

Obama wants to “invest” lots and lots and lots of money, most of which will have to be borrowed. He is focused on “long term growth” scanning the far horizon from the bridge of the USS Obama, plowing through a dark night of financial distress.

He offered a host of extremely bad ideas in order to get to the next shore. The Democrat Congress has set its face against any growth in the actual energy sources upon which the nation depends for electricity and for transportation.

There will be no exploration and drilling for oil and natural gas off the nearly 85% of the continental shelf where huge amounts are believed to exist. There will be no drilling in ANWR. There will be no new leases in states known to be sitting atop huge untapped reserves. As for the coal which provides just over 50% of all our electricity, the entire industry has been targeted for destruction by the President.

The notion that “clean” or “renewable” energy (solar and wind) will ever provide more than the 1% of electricity it presently does is a pipedream. That, however, is Obama’s only “solution.”
Imposing a "cap-and-trade" program of emissions credits on all energy use would chase major industries from the nation while doing nothing to end a global warming that is not happening.

There was much talk of reforming healthcare. A more competitive healthcare system would undoubtedly reduce costs, but that is not Obama’s vision, nor does he acknowledge that healthcare costs are rising in response to an aging American population, living longer lives, requiring more care.

He spoke of investing in education. We spend more per pupil in America than any other nation on Earth and we have one of the most failed educational systems in the world. Eliminating the Department of Education and one-size-fits-all programs would go far to improve education. Loosening the grip of the teacher’s unions would liberate the system entirely.

In point of fact, Obama, the smooth operator, just signed a “stimulus” bill with 9,000 earmarks that is not likely to achieve any real stimulus any time soon. His budget simply exacerbates the Democrat spending frenzy going on in Washington, D.C.

So, here we all are, sailing along on the USS Obama. The captain looks and sounds like he knows what he’s doing, but he is either clueless or deliberately plotting a course for the biggest ice berg he can find.

It’s time for the band to start playing “Nearer My God to Thee”.
Posted by Alan Caruba at 6:41 PM

I wonder too, if catastrophe is just around the corner.
We have elected a right of centre government, and are geographically isolated...a blessing and a curse. Those 2 factors are producing a wave of immigration and returning kiwis, leading to job market stresses. Nil problemo though.

A bit odd, don't you think that this financial implosion arrived with/just before President Obama ?
Had a look at information re Maurice Strong/George Soros ?
Haven't looked at your archives, but the linkage is interesting I think.

I don't believe in coincidence much. Events don't happen in a vacuum.