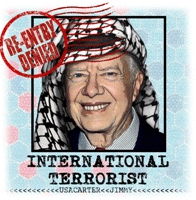 Redux as in “brought back” or repeated.

We need to recall that, in terms of the votes cast in the 2008 election, President Obama did not win by a great majority. It was not a landslide. He had no real “mandate” to restructure the American government or its economy. He offered only vague promises of “change” and “hope”. Now, barely three months into his administration, as a recent Wall Street Journal article headlined, “Obama’s Poll Numbers Are Falling to Earth.”

The reasons are too obvious. He is a liar. He is a Socialist. He would bankrupt the economy and impose huge deficits unto the second or third generation. He is the political return of former President Jimmy Carter, a loony liberal desperate to embrace all the regimes that hate America and wish us dead.

Despite the endless reports in the largely liberal mainstream media, the Republican Party remains the only alternative in the 2010 elections and the odds are Americans will return control to it as was the case in 1994 when President Clinton proved to be a disappointment to so many.

The horrid legislative initiatives that have been passed or are being proposed may have the support of liberals, but there are more self-described conservatives (on fiscal and/or social issues) than liberals in America. An estimated 60% of Americans regard themselves as moderate to serious conservatives.

While one must take care not to assume that all of one group or another are conservative, it is worth noting that there were, as of 2005, 24.5 million veterans in America, of whom by the way, 1.7 million were women.

There are 90 million gun owners in America and you can be pretty sure that 95% or more of them did not vote for Obama, nor are they thrilled with plans to take their guns away or make it impossible to buy new ones, plus ammunition. Indeed, the first response to Obama’s election was a dramatic rise in gun sales!

As of 2005, 48% of all adults in America said they had been “born again.” That is to say they are Evangelicals. They numbered approximately 69.5 million Americans.

As to homeowners—people who are paying their mortgages—68.9% of the population fit this description. They are not happy that Obama wants to distribute $75 billion in taxpayer’s money to people who have defaulted on their mortgages in order to keep them in homes they could never afford in the first place.

There are an estimated 90 million Americans who can be called investors. They have 401.K plans or they invest directly in the market. You may have noticed that Wall Street has rapidly lost any confidence in the Obama administration.

Simply stated, there are more real conservatives in America than liberals. There are, in addition, Democrats who regard themselves as conservative. Many voted for Reagan in the 1980s.

What the Republican Party failed to do in 2008 is give these people a real conservative for whom to vote. The best the party offered was the squishy John McCain, ever eager to “cross the aisle” and ally with Democrats. McCain is one of the loony global warming enthusiasts. It is little wonder that millions of Republicans decided to stay home on Election Day.

What these numbers represent now, however, is the vast bulk of Americans who are growing increasingly unhappy with Barack Obama with every passing day. “Polling data show that Mr. Obama’s approval rating is dropping and is below where George W. Bush was in an analogous period in 2001,” reported the WSJ article.

There is a significant Democrat Party propaganda campaign under way to paint Republicans as the “Party of No.” Saying no to the Obama administration and its plans for America is precisely what is required to save the nation.

For Republicans, the job at hand is to circle Election Day 2010 and to make sure to vote!
Posted by Alan Caruba at 1:37 PM

And why does it feel much longer???

It feels much longer for the reasons you give in your post.

Physicists tend to view the world in different terms than mere humans. It goes with the discipline.

They are also the world's greatest realists.

APRIL FOOL, n. The March fool with another month added to his folly.

Ambrose Bierce
from The Devils Dictionary

Yes, of course, not much difference to the point Alan is making in this post. But consider the difference it might make to the credibility of his opinion. Serious readers seek out commentary that can help shape their own views. On the Web any idiot can voice his opinion, and frequently does. That is why serious readers have to consider the source of the text and make a judgement about the author's own seriousness, and the quality of his commentary. In lieu of personal familiarity, the only thing to go on is the text itself. If it contains factual errors, at the very least it implies sloppiness.

Big Henry~ as a physicist(once, always), do you see that picture in my avatar? That was the USS Patrick Henry, and her arsenal of firepower exceeded the total of all the ordinance expended during WWII, from all sides! That was serious, and she was retired back in 1985.

Obama has control of far greater power and seriously has no clue how to use it for Americas benefit!

Alan refers to the actual calendar months in previous posts Jan-Mar
so I knew what he meant.

I think Alan appreciated the Bierce quote for the point it made!

This may be a case of "violent agreement" among all three of us. I certainly agree with the thrust of Alan's post, and I despise Carter. If you were at all familiar with my own blog, you would have no doubt about that. I invite you to have a look:
Remembrance in Spacetime

I am familiar with the deterrence power of a ballistic missile sub, having been a research physicist at Los Alamos National Laboratory for the better part of my professional career.