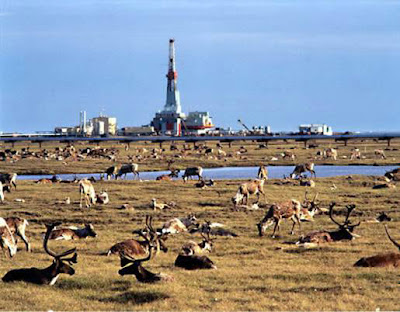 It’s called the Alaska National Wildlife Reserve and I urge you to visit it. It’s a tad bleak during the winter months which only seem to go on forever and, during the summer months, if you love mosquitoes the size of a Hummer, you will love the Reserve.

If you would like to see some pictures of ANWR, visit the Heritage Foundation website at
http://blog.heritage.org/2008/06/29/the-truth-about-anwr/ and if you want some actual facts about it, visit http://www.anwr.org/.

It’s doubtful you will run into any members of the Sierra Club, Friends of the Earth, or the dozens of other environmental groups who blather away about how drilling for oil there will mean that thousands of caribou, hundreds of polar bears, and whatever critters call it home will die and vanish from the face of the Earth forever.

To put it mildly, ANWR is a very inhospitable place and only people who absolutely have to be there for any reason actually go there. That includes crazed zoologists, entomologists, and bird watchers. And, with luck, some petroleum engineers and crews.

“Geologists agree that the Coastal Plain has the nation's best geologic prospects for major new onshore oil discoveries. According to the Department of Interior's 1987 resource evaluation of ANWR's Coastal Plain, there is a 95% chance that a 'super field' with 500 million barrels would be discovered. DOI also estimates that there exists a mean of 3.5 billion barrels, and a 5% chance that a large Prudhoe Bay type discovery would be made.” That’s from the ANWR Internet site linked above.

Deep below the surface of ANWR are potentially billions of barrels of untapped oil. Every time our national idiot, Barack Obama, talks about our “dependence” on foreign, imported oil, I think of ANWR and want to ship him there with a box of matches, a small ax, and a sleeping bag.

In the news of late is word that Interior Secretary Ken Salazar said he would consider tapping oil in ANWR if it can be done from outside the refuge’s boundaries, “leaving animals and other wildlife undisturbed.” He, too, is an idiot. Just look at the photos on the Heritage Foundation page that show the way the animals are totally indifferent to those Alaska locations where oil is being pumped from the bowels of Mother Earth.

Salazar called ANWR is “a very special place.” Oh yeah. If you want to know what it’s like on the far side of the Moon with only the occasional Alaskan Loon to keep you company, you will love vacationing in ANWR. Salazar has never seen an acre of land he would not instantly want to put off limits to development or use of any kind.

Sen. Lisa Murkowski (R-AK) has introduced legislation that would allow oil companies to access oil in ANWR via directional drilling from platforms outside the refuge itself. This suggests that building platforms inside the Reserve will somehow so severely damage the environment that it should not be done. We’re talking about a small patch of land the size of a couple of football fields, compared to 19.5 million acres!

Do you think it might be less costly to build one or two such platforms than have to drill miles and miles of “directional” pipe to get to where the oil is?

The entire national energy debate is so fretted with deception by the Greens and the politicians too frightened to offend them that it is impossible to get at the simple truth of how much oil, natural gas, and coal we have and the how great the need for new energy sources is as our population continues to grow.

We continue to live with a tsunami of lies regarding ANWR and the whole issue of “energy independence”, “dependence on foreign oil”, ad infinitum. The Obama administration so hates the oil and coal industries that, if they are mentioned, staff fall to the floor, spastically flailing about, and foaming at the mouth,

If Americans want to go back to $4 a gallon gasoline, they need only wait a while because that price will return as the result of not permitting our own vast national oil reserves to be accessed anywhere in Alaska, the lower 48, and our continental offshore shelf.
Posted by Alan Caruba at 1:37 PM

FDR insisted on “bold experimentation” and sunk the nation into a deep depression. Now everyone has these grandiose ideas how to restore the economy that seem (at least to me) to be theoretical, supremely complicated, phenomenally expensive and risky. But I wonder what would happen if these two unlikely events occurred?

1. Lift all restrictions on drilling for oil; no matter where it is.
2. Lift all the egregious environmental regulations that prevent the construction of refineries.

This leads me to a series of questions that I would really like to have the answers to.

1. Would that create huge private investment?
2. If private businessmen did the investing why would it cost the taxpayers anything?
3. Would the government receive huge amounts of tax money without raising taxes?
4. Would that solidify the price of oil?
5. If that happened would that allow businesses to plan ahead better?
6. Would that create “good paying” jobs?
7. Could that possible awaken the "good economy" giant sleeping out there somewhere?

Just a thought, but then again….. I just think simple thoughts. Not like the geniuses running the economy.

Alan, Late tonight, I posted your excellent ANWR article to Newsvine.com. You might want to check the link tomorrow to see what people have written about it:

Keep up the great work!

The commitment to destroying private enterprise by the Democrats is across the board suicidal for our nation.
Giving these people any benefit of the doubt, as even our conservative media does, is dumb.

The liberal formula works like this-
the more you can kill off the free enterprise system, the more people "we" will own through their dependency.

When Butch told Sundance "Hell, the fall will probably kill you!"
he had it right.

They plan to make energy so expensive that everybody will depend on government subsidies permanently, we will all be slaves.

What will you do when your monthly energy bill is 3-5x higher 5 years from now, and driving is a luxury few can afford? How will our economy grow in those conditions?
Cap and trade taxes alone will do this!

Thanks for helping spread the word on ANWR.