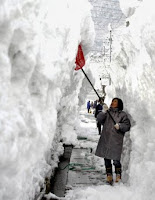 Has it occurred to you that constantly telling children and teens that "global warming" is real and that the Earth is in deadly peril constitutes child abuse?

That thought came to me as I enjoyed some of the excellent seminars and speeches during the March 8-10 second annual Conference on Climate Change. Here were some of the nation’s leading climatologists and others spelling out in detail precisely why there is no global warming and, indeed, why the Earth is now into a decade-old cooling trend. The experts believe that the Earth will stay in this trend for easily another decade or two, maybe three.

Sponsored by The Heartland Institute, a Chicago-based non-profit, free market think tank, the conference was, of course, slandered by the few mainstream media “journalists” who took note of it.

My complaint, however, is about the vast media coverage of global warming as something that is actually happening. The other element of this “reporting” is that the GW predictions made always seem to self-adjust forward ten, twenty, fifty or a hundred years. The current cooling trend is giving the global warming alarmists fits.

Back in the 1970s the news was filled with reports of a coming ice age. In the 1980s the reports changed to “global warming” and they took off as the defeated Al Gore made global warming his highway to vast wealth, selling bogus “carbon credits.”

Requiring school children to watch, often many times, Gore’s “An Inconvenient Truth”, is part of the child abuse to which I refer. It is so filled with inaccuracies that a British court ruled that it could not be shown in schools without a laundry list of disclaimers and corrections being made by the teachers.

This is not to say that adults, too, aren’t subject to the same abuse as the children. However, it is about to become far worse if the Obama administration’s intention of imposing “cap and trade” regulations on CO2 emissions comes true. This carbon tax is anticipated to raise $646 billion for the federal government and we all know how careful it is when it comes to spending taxpayer’s money.

Speaking before the House Ways and Means Committee last year, Peter Orszag, formerly the Director of the Congressional Budget Office and now President Obama’s Director for the Office of Management and Budget, said that a “cap and trade” law to cut carbon emissions by 15% would cost the average household about $1,300 in higher energy costs. He added the working class families would be hardest hit.

Actually, the Obama gang wants to cut carbon emissions by more than three times the original figure, 83%. Using Orszag’s calculations, that means the average family will pay close to $4,000 a year or $333 a month. For nothing!

There is no scientific justification to cut carbon dioxide emissions. They play no role in global warming. At a time when CO2 emissions have risen, the Earth is still cooling and likely to do so for a long time to come.

This is a vicious tax to be imposed on Americans for the purpose of rendering them further impoverished in the midst of a financial crisis of worldwide proportions. And when you tax the parents, you tax the children too.

If the Green organizations are the shock troops of global warming, President Obama is the Abuser-in-Chief.
Posted by Alan Caruba at 12:47 PM

Mr. Caruba
I have a video on my .vox blog that I made with the digital camera. You are welcomed to copy it and use it anytime you like. If you can't do that follow the links in the .vox blog to my other site. If need be I will put a .wmv file of the same video in there and you can copy that also.
http://mike630.vox.com/
http://miketrani.com/blog/

Mike has some interesting data regarding Obama on his Vox.com site.

For those wondering, a Necromancer is someone who communicates with the dead in order to predict the future or engages in black magic. Methinks Mike is using it as a metaphor for learning from the past and being watchful for evil in the world.

The metaphor is a good description but with necromancer it's really referring to Sauron the Great in J.R.R.Tolkien's Lord of The Rings.Or Morgoth the original necromancer. But I am not Frodo and we need him it seems.

The one way we can fail our children is to give up on them. That is something that really only applies to caring parents of course.
Caring parents know that they must cut the umbilical when the time is right, and let a child succeed or fail on their own, yet make it clear that they support them with their love.
We do not treat our grown child as a child. We do not try and make decisions for them, and suppose that we know what is best for them in every aspect of their life.
We recognize them as individuals early on, and when the rest of society accepts them as one too they move out from our shelter.
Not only do we now have a government that wants to treat us as incapable and immature children they are stealing the futures of our actual children.
They pretend to love all the children, and feign empathy as their protectors.
Child abusers have a cycle too. They do one thing while promising another. They abuse- than apologize.
Most of all, they lie! The lies become elaborate, and the purpose behind them is for their own egotistical singular desire, power via control!
Global warming and cooling is natural. The anthropogenic cause theory and so called consensus is "the lie" of the millennium! It proves that these liars do not care in the least, and that children are not considered as individuals but rather as subjects to control well into the future! It is indeed abuse and exploitation of innocence!
This is why us real parents cannot give up fighting for our children and informing them what has happened and why!
But I digress, as I might be ranting now!

Rant on! Why should I be the only one?

I have not heard anyone say this:
We should consider ourselves very fortunate that the current downward trend is happening in the temperature.
I could just as well have been the opposite giving credance to the alarmists.

Joe, I certainly agree that's it's a good thing that the weather this Winter isn't supporting the global warming gang's hysteria, but really, what does that matter to them? From what I've seen, they rarely need any facts to lend credence to their claims. All they have to do is let their buddies in the media overwhelm us with their version of the truth, and let the gullability and laziness of the American public do the rest. They just "Shout the lies, and whisper the retractions ..." and the average American just eats it up as truth. And, from what I'm seeing, this is just the beginning of the assault. Have you noticed the huge increase in their coverage of gun-related crimes in the past couple weeks? It doesn't take a rocket scientist to see where this is going. From what I saw on the front pages of AOL yesterday, and on the news last night, you'd think we were in the middle of a civil war. Funny thing though, they had better watch out ... lies have a habit of coming back to bite you in the rear. If they keep telling us there's war in our streets, they may wake up to exactly that one day.

I'm going to blog it!