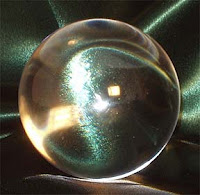 I rarely make predictions. Events can change the entire direction of a nation in the blink of an eye. It happened in my lifetime with Pearl Harbor, the assassination of John F. Kennedy, the resignation of Richard M. Nixon, and with 9/11.

As this is being written, air traffic to, from, and throughout Europe is barely recovering because of an Icelandic volcano and no one really knows how long that will continue.

So, barring any catastrophic natural events or wars, I will look into my crystal ball and narrow my predictions to the period between now and the midterm election on November 2, 2010.

Having forced a healthcare program on America that 85% of the voters did not want, the Obama White House now knows it can do the same with other major pieces of legislation intended to “transform” America into a socialist wreck comparable to European nations, one of which, Greece, is bankrupt while two others, Spain and Italy, are close to it.

The Obama administration is getting ready to put a chokehold on the nation’s financial sector by claiming it needs more regulation. It is a lie. Few sectors of the nation are more heavily regulated by the government. What is needed is more effective enforcement of existing regulations. Had that been the case there would have been no Bernie Madoff and the 2008 crisis brought about by Freddie Mac and Fannie Mae could have been avoided.

The next piece of legislation to be imposed on Americans before November will be Cap-and-Trade, a law based on a “global warming” crisis that is not happening. It will impose “caps” on how much energy industries, businesses, and finally individuals can use and it will institute a “trade” mechanism in bogus carbon credits that will make a few companies, utilities, and individuals very rich while bleeding Americans by taxing energy use at every level.

The era of abundant and affordable energy will end and, with it, the economy of the nation. Companies that manufacture goods will move offshore to friendlier places such as China and India. Both were exempted in the United Nations’ Kyoto Protocol intended to force greenhouse emission caps on industrialized nations like America and Europe.

The coal industry, responsible for providing the source of half of all the electricity generated in America, will be under attack in every way at the government’s disposal. Mountain top mining will be the next target. Beyond that, all coal-fired plants will encounter a regulatory hell. There will be no offshore exploration for new sources of oil and natural gas.

When the brown-outs and black-outs begin, the nation will be five to ten years from providing new sources of electrical power whether it’s coal, natural gas, or nuclear. By then billions in government (your money) subsidies will have been wasted on “green” or “clean” or “alternative” energy in the form of wind and solar. They currently represent about one percent of all the electricity generated in America.

By the midterm elections, the unemployment rate will have likely increased. A growing, permanent class of the unemployed will be maintained with endless extensions of government support.

The southern border from Texas to California is becoming a war zone. There’s a reason the State of Arizona just passed a law allowing its citizens to carry concealed weapons and another law to empower its law enforcement authorities to rid the State of illegal aliens. Do not be surprised by the rise of southwestern state militias to deal with the constant invasion. Watch for an effort to pass an amnesty law as well.

What Americans have not caught onto as yet is that the Obama administration’s policies and actions are now fully controlled by people who did not have to go before the U.S. Senate for approval. They are Obama’s “czars” and they wield as much influence or more than constitutionally appointed cabinet secretaries.

So the real question between now and November is “How much damage can the Obama White House inflict?” and the answer is a lot.

I had a recent conversation with a good buddy and stalwart (little "r")republican in regards to the ongoing Obama socialist putsch, and his only comment was, "The worse things get, the better for us."

I think he meant only complete collapse of the current political and economic system in this country could lead to needed radical reforms.

Well they do say every black cloud has a silver lining.

I can see everything happening except unemployment increasing. I think the administration will "adjust" the numbers so they look good and everyone will be grateful.

And now Obama is calling Arizona's immigration bill 'misguided'??!! Illegal is illegal! What's so hard to understand about that! Every day Obama and his 'misguided' administration never cease to amaze me!! I guess since we have yet to see Obamas birth certificate yet....oh please...don't get me started!!

I hope you're wrong. Unfortunately, I think you're reading things pretty well.

I would not be surprised to see open warfare along our southern border, and quite frankly, I'm surprised it hasn't happened already..

I have a commentary upcoming that examines "a whiff of revolution" in the air regarding Obozo.

These are troubling times for lots and lots of folks.

Then there's the foreign problem and the nuclear treaty that shows President Obama's fixation with "devaluing nuclear weapons" and ridding the world of them. Obama, is "condemning the nation to unilateral disarmament." Our President with this attitude can not be trusted to "carry the football" and give the codes, if and when needed. I don't think he would attack back if missles were flying our way. It doesn't fit his idealogy. He's working on the slow plan of the demise of the USA, but given the chance, a quick distruction works too.